Escape Leatherface (formerly after finding out that he is her cousin).
Help Leatherface kill Burt Hartman as revenge for killing their family (succeeded).
Live with Leatherface and take care of him forever (succeeded).

Heather Miller (real name: Edith Rose Sawyer) is the main protagonist of Texas Chainsaw 3D. She is the long-lost member of the Sawyer family.

She was portrayed by Alexandra Daddario.

Edith was born sometime in 1973. When the people of Newt led by Burt Hartman burn down the Sawyer house and kill most of the Sawyer family (including her mother Loretta Sissy Sawyer), Edith is raised by Gavin Miller and Arlene Miller, who named her Heather Miller.

Years had passed, Heather and her friends move to live at the Sawyer-Carson Estate, but are attacked by Leatherface, who kills all of her friends, and even chases her through the carnival. But, Deputy Carl manages to stop Leatherface and make him flee.

Heather was then taken by Deputy Carl to the police station for some questioning with Sheriff Hooper. Heather learns what the townspeople did to her family and flees.

Heather meets her lawyer Farnsworth in the bar, who reveals to her that Leatherface was her cousin. She was then caught by Mayor Hartman, who beats up Farnsworth while she runs for her life, only to be briefly run over by his partner Ollie. While Ollie tries to capture her, she cuts his face, which keeps he and Mayor Hartman distracted from going after her.

Heather is soon caught by Hartman's son Deputy Carl Hartman, who ties her up at the long-abandoned Sawyer slaughterhouse to lure Leatherface.

Once there, Leatherface finds out that Heather is his cousin and cuts her ties, but is attacked by Mayor Hartman and his partner Ollie.

As Heather hears her cousin being beaten she decides to help him, killing Ollie with a pitchfork and giving Leatherface his chainsaw, which he uses to force Mayor Hartman into a meat grinder. 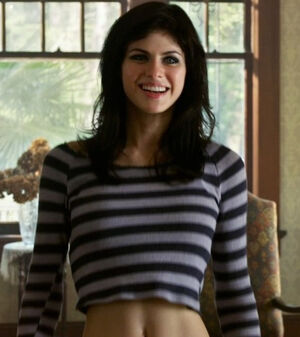 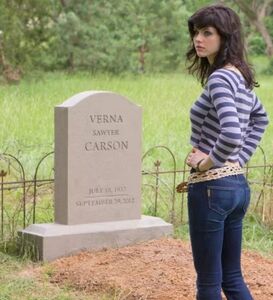 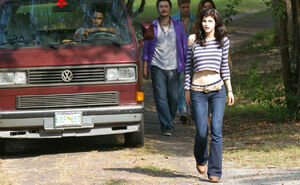 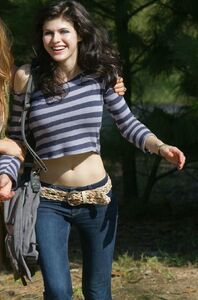