No information
Hector, is the tritagonist of Fire Emblem: The Blazing Blade and a minor character in Fire Emblem: The Binding Blade. He is an axe-wielder, and he is also the first lord in the series to wield, before promotion, only one weapon that is not a sword.

Hector is a man with a blue hair, he wear a blue armor and a red cape

in Super Smash Bros. Brawl, Hector appears as a sticker who increases the strength of swords, in Ultimate, he appears as a support ace spirit, able to be summoned by using cores from Lilina and any two attack type cores 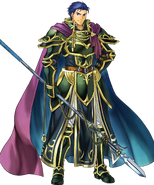 Retrieved from "https://hero.fandom.com/wiki/Hector_(Fire_Emblem)?oldid=1944205"
Community content is available under CC-BY-SA unless otherwise noted.