Curse of the Black Pearl:

On Stranger Tides: Kill Blackbeard out of revenge for taking the Black Pearl from him and costing him his leg (succeeded).
Dead Men Tell No Tales: Find the Trident of Poseidon and kill Salazar (succeeded).

The character is initially a villain who is completely willing to kill to get what he wants, but by the second film, despite still being selfish and deceitful, he is not evil like in the first film and helps Jack to defeat Davy Jones and Cutler Beckett. Over the course of the film series, he becomes more of an anti-hero, but at the climax of the fifth film, Barbossa turns good for real and redeems himself.

When the original Disneyland attraction was revamped in 2006, Barbossa was added to the ride. Among other appearances, the character appears in several books and video games.

He was played by Academy Award winning actor Geoffrey Rush, who also played Casanova Frankenstein in Mystery Men and Steven Price in House on Haunted Hill.

His father was of an unknown state and is mother was Irish. Barbossa had a father who continually beat him and grew up in extreme poverty, but he would escape and went to sea at the age of 13. He had once been an honest sailor, but became corrupt upon realizing that he could gain a lot more a lot quicker if he broke the rules, even stooping to murder, which led to him becoming a pirate.

Confident and persuasive, Hector Barbossa combines experience with almost reckless daring. Barbossa became a pirate because of his wish to raise his social status and his greed for wealth and power, but not because he wanted to live the adventurous life as a pirate in the way Jack Sparrow did. He considered himself a gentleman of the seas and could act polite if he wished; he possessed a certain eloquence which he frequently used to his advantage.

Like some pirates, Barbossa considered the Pirate Code to be "more guidelines than actual rules", but nevertheless he respected the right of parley and preferred interpreting the Code in his own favor instead of breaking it openly. Although he saw himself as an honourable man, Barbossa had a tendency to manipulate and twist deals he makes with people to his own advantage.

Barbossa's relationship with Jack Sparrow was complicated. He led the mutiny against Jack, resulting in becoming captain of the Black Pearl, but also helped rescue Jack from Davy Jones' Locker. Jack was also one of the few who called Barbossa by his first name "Hector", implying a good friendship prior to Barbossa's mutiny. Even after all they have been through, Barbossa was secretly an admirer of Jack's incredible escapes.

Some time after his first mutiny on the Black Pearl, Barbossa kept a capuchin monkey, which he named "Jack" after his old captain Jack Sparrow. He seemed to genuinely care about the monkey, who occasionally accompanied his master everywhere and often sat on his shoulder.

Barbossa’s favorite delicacy was caviar, but he also had a notable appreciation for green apples. He offered an apple to Elizabeth during their dinner aboard the Pearl and he commented that after the curse was lifted, he would eat a whole bushel of apples. This seemed to be one of Barbossa's simple pleasures in life - unable to feel or taste due to the curse - for this reason he always kept a number of apples on the table in his cabin on the Pearl. At the moment of his death, Barbossa was holding an apple because he intended to eat it immediately after lifting the curse. However, Barbossa was able to take a bite of an apple when he revealed himself in Tia Dalma's shack.

He was a master seaman who had excellent navigational abilities and a skilled strategist who was good at planning ahead. These abilities not only gave him many advantages in his pirate life, but also earned him much respect both among his subordinates as well as among his enemies; these skills, combined with his exceptional fighting abilities, were in fact the reason why Barbossa managed to survive a life of piracy for several decades and contributed to his reputation and his high-ranked position during this time. Barbossa has also definitely proven himself to be cunning by seemingly making certain agreements or arrangements, but mostly for his own benefit.

Barbossa is a skilled swordsman, hinting at a lifetime of experience, and proved capable of holding his own against numerous enemies at once. However, his fighting style was quite dirty; before challenging the legendary pirate Blackbeard, Barbossa poisoned his sword, saying he wasn't foolish enough to fight Blackbeard without a "venomous advantage". During his duel with Blackbeard, he also used his crutch as a weapon in battle, wielding it along with his sword against Blackbeard.

Barbossa was a tall man who spoke with a strong West Country accent and uses the common pirate phrase, "arrgh". He had many scars on his face, the most notable one being under his right eye. Barbossa wore fine clothing befitting a man of his stature and status. He was rarely seen without his big, round, dark hat which is decorated with blue ostrich feathers as a show of vanity. At the point of his becoming a privateer for England, Barbossa abandoned his pirate garb and wore instead a black and gold bicorne along with Naval clothes, including a dark blue coat with gold trimmings and crimson cuffs. While his clothing changed, Barbossa still wore his hair long and scraggly, along with his signature moustache and beard, unless he wore his powdered wig in the presence of higher-class persons.

Among Hector Barbossa's jewelry, he wore a silver ring which bore the image of a lion's head, which signified Barbossa's status as leader, on his right ring finger. Barbossa's weapons included a rapier and a flintlock pistol, an elegantly engraved weapon was won in a duel against a Spanish pirate and allowed him to kill his enemies in the way of a gentleman.

Prior to becoming a privateer, Barbossa had lost his right shin and foot during Blackbeard's attack on the Black Pearl. After losing his leg, Barbossa began sporting a peg leg in place of his right shin and foot, which contains a rum supply and a cup. He also used a wooden crutch, which was used both for balance and for combat as shown during his fierce duel with Blackbeard. 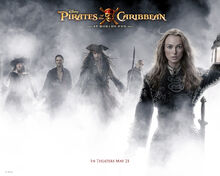 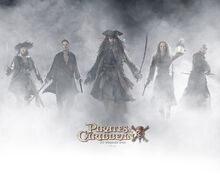 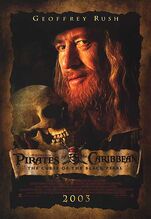 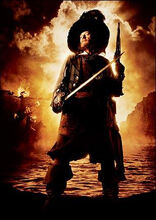 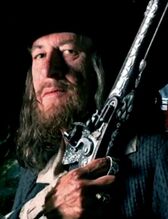 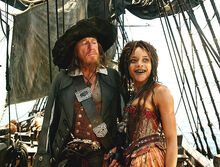