Greedy Steer
Heffer Wolfe is a fictional character and the deuteragonist of the animated television series Rocko's Modern Life and the comic book series of the same name. He is an anthropomorphic steer and his catchphrase, which can be heard in the series' opening credits, is "That was a hoot!". He is also sometimes an antagonist or an anti-hero in the series.

His voice was provided by Tom Kenny, who is also voicing SpongeBob SquarePants, Dog and Eduardo.

Joe Murray, creator of Rocko's Modern Life, partially based Heffer on an adopted friend who enjoyed bologna sandwiches and "had an interesting take on life." Heffer first appeared on an ID spot aired on MTV in 1989; the ID spot depicts Heffer as flying out of a television with the MTV logo branded on his buttocks.

Murray originally wrote "Sucker for the Suck-O-Matic" as the pilot episode; the executives decided that Heffer would be "a little too weird for test audiences." Murray, instead of removing Heffer from "Sucker for the Suck-O-Matic," decided to write "Trash-O-Madness," an episode without Heffer, as the pilot episode. Originally Murray did not include any information about Heffer's origins in his pitch to Nickelodeon. Vince Calandra wrote the Heffer's origin plotline in Season 1.

Murray auditioned Kenny in a large casting call in Los Angeles and chose him as the voice actor for Heffer.

Jeff "Swampy" Marsh, a storyboard writer, says that Heffer's right eye and left nostril are "notched at the bottom" due to Murray's design style. Marsh added that the animators found keeping the sides straight "a little tricky at first" and that they referred to the design as "Tombstone-shaped."

Best friend of Rocko, Heffer was raised by wolves in Richhill, as seen by his family name, who originally were going to eat him, and thus began to fatten him. Eventually the family grew to love Heffer, so they instead raised him, not letting him know that he was adopted until Rocko accidentally revealed the truth when the Wolfe Family invited him for dinner. The mark which Heffer believed to be a "birthmark" on his buttocks is actually the plotting lines showing where the wolves were going to divide him.

Besides eating a lot, Heffer being called a cow is another running gag. Most characters would call him a "cow", then either his father or himself would correct them by calling Heffer a steer. Heffer's name is taken from the word "heifer".

The Nickelodeon UK page describes Heffer as a "devoted friend" who "loves life."

Heffer's lack of fear mostly stems from stupidity instead of genuine bravery. The Nickelodeon South East Asia website describes him as an "overgrown slob."

Despite being obese, he can drive; unlike Rocko he does not wear seat belts. This, in fact, caused severe damage to his father's car when he was driving to the store, and decided not to put the seat belt on because he was too big for its maximum length, and when a Chokey Chicken restaurant was being torn down a few hundred yards ahead of him, the plastic Chicken mascot came bouncing down the road and headed Heffer's way. He successfully stopped and avoided collision. However, his massive size along with the momentum of the sudden deceleration caused him to plow right through the front of the car.

Despite his size, he can be very nimble at times, most notably when he is roller-skating. At the local skating rink, he is known as "The King," and performs his own skating routine at the request of the patrons.

It is revealed in an episode that Heffer's biological father is still alive with a girl cow named Joyce living in a trailer in the Canoga Park section of the San Fernando Valley region of Los Angeles, California, United States. However, Heffer's father seems to have very little patience for his son, even to the point of dropping the short-tempered bombshell that "your mother's a car seat in Illinois." 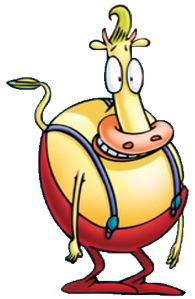 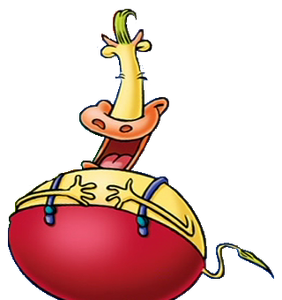 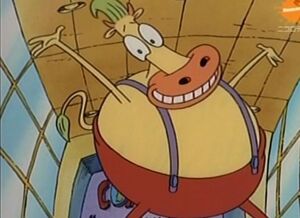 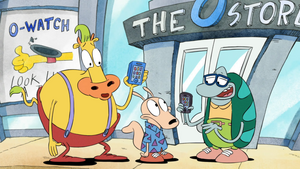 A shaved and elderly version of Heffer as the real scoutmaster in the final episode of Camp Lazlo. 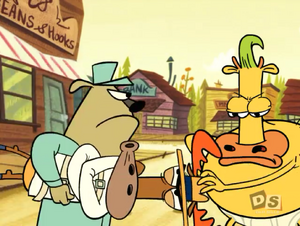 A normal version of Heffer (animated by Dan Sills) vs Scoutmaster Lumpus in the alternate ending of Camp Lazlo's final episode. 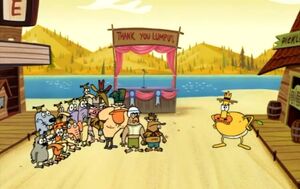 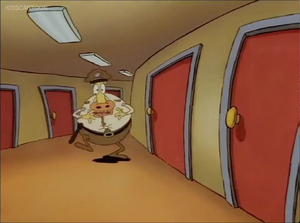 Heffer Wolfe quits his job as a Security Guard. 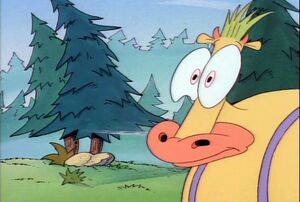 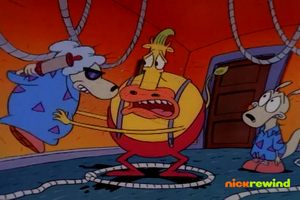 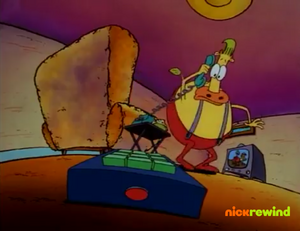 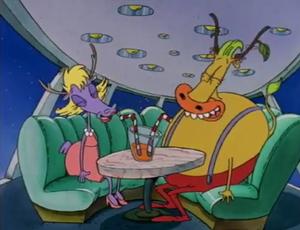 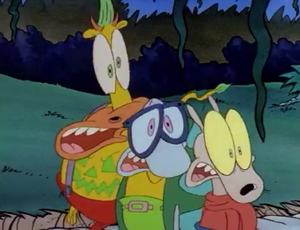 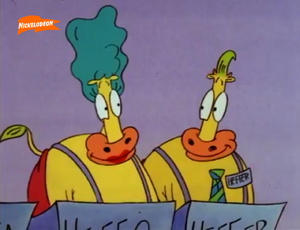 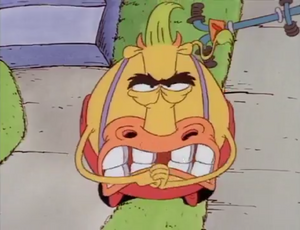 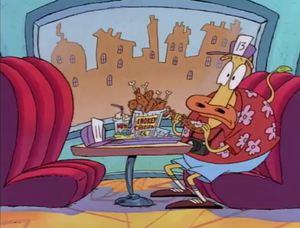 Retrieved from "https://hero.fandom.com/wiki/Heffer_Wolfe?oldid=2156597"
Community content is available under CC-BY-SA unless otherwise noted.