Unknown (Heidern is a codename)

General of the Soldiers of Fortune

Avenge his wife and daughter and kill Rugal Bernstein.

Rugal Bernstein, NESTS, Those From The Past

Military Hero
Heidern is a character in The King of Fighters vdieo game series, originally appearance as a playable character in The King of Fighters '94 in the Brazil Team (later known as the Ikari Team), along with Ralf Jones and Clark Still. He is the commander of the Ikari Warriors, and issues orders to his adopted daughter Leona and his best soldiers: Clark Still, Whip, and Ralf Jones. He is also known as the General of the Soldiers of Fortune.

In the eight years before The King of Fighters '94 tournament, a 34-year-old Heidern was promoted to his current position for his outstanding martial arts and strategic level. The event was held at a top secret base in Brazil, where his wife and daughter attended the ceremony. Rugal Bernstein grabbed Heidern's high score, attacked the base when he left, and killed 50 Secret Service personnel when he arrived. When Heidern rushed back to his position, Rugal stripped his right eye and thought he was not suitable to be part of his collection. Instead, Rugal kill Heidern's wife and children. Shame and loneliness, he developed his own fighting style and mercenary units, Ikari Warriors. Since then, he has pursued Rugal to revenge against the death of his family.

Sometime before The King of Fighters tournament, he found Leona to be the last survivor of the destroyed village. This girl is amnesiac, Heidern adopts her to take care of her. He initially banned her from attending any training, but she became tolerant because of her inclination to the matter. His refusal to give her a formal rating is a way for him to protect her from some danger on the battlefield.

Starting with the The King of Fighters '96, he assigned Leona to take a role in the tournaments while issuing orders outside the court. Since the Ikari Warriors attempted to destroy the NESTS team, he has continued to play an important role in one of the series of stories, NESTS Saga. He continues this role of the event around this mysterious group known as Those from the Past. When Leona experienced a Riot of the Blood after the 2003 tournament, he decided to pull her out of the next one and stay with her as she recovered. After hearing Ralf and Clark's personal assessment of Leona, he asked his adopted daughter to participate in the competition again. At the end of KOF XI, Ikari team successfully secured Magaki's body and intended to analyze it, but the cruise they were riding was invaded by Shroom and Rimello. The two took Magaki's body, and Shroom also stole Heidern's eye mask and began wearing it as an insult and proof of his ability. Heidern ordered the team to investigate role Those from the Past and Rose Bernstein have in the KOF XIII tournament.

Very calm and silent, Heidern's personality was built because of the trauma of losing his eye and his family to Rugal. Although he hides his emotions through a veil of professionalism, he cares deeply for all of his subordinates, especially for Leona.

Heidern is very strategic, especially when trying to stop a major threat. Apart from Ralf, Clark and Whip, he hires mercenaries and free agents to expedite work, as he is seen assigning missions to Vanessa, Seth, Ramon, Blue Mary and others.

Heidern is not above accepting help from others, even accepting the help and intel contribution of Adelheid Bernstein, the son of his enemy, the late Rugal Bernstein. 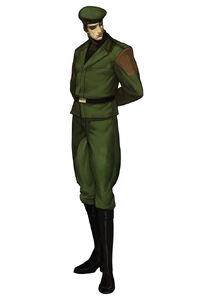 Retrieved from "https://hero.fandom.com/wiki/Heidern?oldid=1789213"
Community content is available under CC-BY-SA unless otherwise noted.