Help Moana and Maui restore the heart of Te Fiti.

Heihei is a supporting character of the 2016 Disney animated feature film Moana. He is a rooster that unintentionally joins Moana and Maui on their journey across the ocean.

He was voiced by Alan Tudyk, who also voiced K-2SO in Rogue One.

Heihei is one dumb rooster—the village idiot, in fact. When the clueless chicken accidentally stows away on Moana’s canoe, he lands a front-row seat for her epic journey. 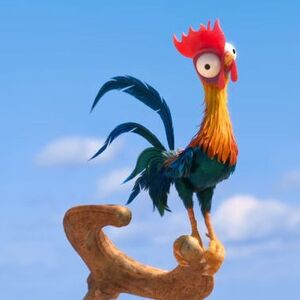 Heihei with Pua
Add a photo to this gallery

Retrieved from "https://hero.fandom.com/wiki/Heihei?oldid=1856088"
Community content is available under CC-BY-SA unless otherwise noted.