NOTE: This article is about the incarnation of Heimdall from the Marvel Cinematic film series. The mainstream version can be found here: Heimdall (Marvel).

Gatekeeper
The Watcher of Worlds
The Protector

Aid Thor in stopping Loki from destroying the Frost Giants.
Aid Thor in leaving Asgard to stop Malekith.
Aid Thor in saving the Asgardians from Hela and Ragnarok.
Send Hulk back to Earth to warn them of Thanos' plan (all succeeded).

He is an Asgardian who was gifted with the power of absolute senses, allowing him to nearly see what was happening across the nine realms. Due to his abilities, Heimdall became Asgard's gatekeeper and protector, tasked by King Odin to prevent threats from entering the realm. During his tenure as gatekeeper, he would assist his friend Thor in stopping his adoptive brother Loki, the Dark Elf Malekith, and Hela from destroying the realms. He would meet his end by the Mad Titan Thanos, but managed to send Hulk to Earth to warn them of Thanos' plans of wiping out half of the universe.

He was portrayed by Idris Elba, who also played John Luther in the titular BBC series, Stacker Pentecost in Pacific Rim, Roland Deschain in The Dark Tower, and Bloodsport in The Suicide Squad, and also voiced Truck in Call of Duty: Modern Warfare 3 and Knuckles the Echidna in Sonic the Hedgehog 2.

In Thor: God of Thunder, he was voiced by Phil LaMarr (who also voiced Samurai Jack in the titular series, Green Lantern in the DC Animated Universe, Static in Static Shock, Philly Phil in Class of 3000, Rick Grimes in The Walking Dead: Motion Comic, Kit Fisto in Star Wars: The Clone Wars, Bail Organa in Star Wars: The Clone Wars and Star Wars Rebels, and Kotal Kahn in the Mortal Kombat series), while in Thor: The Dark World - The Official Game, he was voiced by Dennis Carnegie.

Heimdall was presumably born on Asgard, and was blessed with absolute senses, which allowed him to see most things in the nine realms. Due to his power, Heimdall was given the position of gatekeeper, protecting Asgard by preventing threats from entering the realm at the Bifrost Bridge. He became acquainted with King Odin and his sons Thor and Loki, and participated in transporting Loki back to Asgard during the Norwest Airlines heist.

Heimdall was an Asgardian with near nigh-sensory senses, but was unable to see that Frost Giants have infiltrated Asgard. Though the Destroyer killed them, Heimdall was mortified to see that he missed the intrusion. The Gatekeeper allowed Thor, Loki, Sif, and the Warriors Three travel to Jotunheim, but warned them that if was a risk, he will not reopen the bridge. Odin entered the Observatory while they were gone, and ordered Heimdall to send them back as he dealt with Laufey.

Odin took away Thor's powers and sent him to Midgard, and was placed into Odinsleep, which unnerved Heimdall. While he was in sleep, Loki took place as the king of Asgard, and Heimdall was forced to be loyal to Loki. Heimdall noticed that Loki had returned from Jotunheim, and realized that his fear had come true (that he can't see anyone enter the land of the Frost Giants). Despite his concerns, he was ordered by Loki to temporarily to shut down the Bifrost Bridge.

Convinced of Loki's plans, Heimdall broke his oath and allowed Sif and the Warriors Three go to Midgard to find Thor. Enraged, Loki went to Heimdall, who was waiting for him in front of the Observatory. Loki released Heimdall from his title as gatekeeper, and Heimdall responded that he no longer had to obey. Despite his attempt to attack Loki, he was frozen by the Casket of Ancient Winters. Heimdall stayed frozen in place, and witnessed Loki let in the Frost Giants and King Laufey, and was unable to move until Thor called for his assistance. Heimdall defeated the Frost Giants that were behind him, and was able to place Hofund to re-open the Bifrost Bridge. Weakened, Heimdall was taken away by Sif and the Warriors Three for aid, as Thor confronted Loki.

Heimdall was re-entitled as gatekeeper upon Odin awakening, and Loki's defeat and apparent death. Despite the destruction of the Observatory, Heimdall could still use his senses and see Jane Foster still looking for Thor. As a result of the Bifrost's destruction, Asgardians were unable to travel across the nine realms, which caused them to fall into chaos. Odin was forced to use dark energy to send his son to capture Loki on Earth, and after obtaining the tesseract, Thor gave it to Heimdall to rebuild the bridge.

Heimdall informed Thor that he had lost track of Jane on Earth, much to Thor's confusion and urgency to return to her. When Asgard was attacked by Algrim, Heimdall sensed a Dark Elf sneaking pass him with invisibility. The gatekeeper destroyed the ship after disabling it's cloak, but soon discovered that Malekith and the Dark Elves had arrived. Heimdall then activated Asgard's defenses, but Algrim was able to destroy the royal palace's generator, which led to the death of Queen Frigga.

After attending her funeral, Heimdall was told by Odin to shut down the bifrost bridge and prevent anyone from entering or leaving the realm. Without a post, Heimdall consoled Thor, and agreed to the latter's plan to help him on his mission to hide Jane, as Malekith was after Foster since the Aether was embedded inside her. The gatekeeper tricked Odin into meeting him to allow Loki to help Thor and his allies escape Asgard, and Heimdall willingly went into custody after confessing of his actions. It's assumed that he was returned to his duties after Malekith was stopped.

When the Kree named Vin-Tak landed on Earth, Heimdall was able to see this and informed Odin of the occurance. The king then tasked Sif with traveling there to stop the Kree.

When Thor was enthralled by Scarlet Witch, he saw Heimdall forewarn him of the Norse God leading them to Hel. Thor was disturbed by Heimdall's white eyes, and was berated by the gatekeeper that he was a destroyer, leading them all to die. Thor would reunite with Dr. Erik Selvig to have a vision, where he learned of the Infinity Stones.

While these events were happening, Heimdall had been banished by Odin (who was Loki in disguise) for supposedly neglecting his duties. However, it's possible that Loki knew that Heimdall would see pass his disguise, and didn't want to lose the throne and had him exiled. He was replaced by Skurge, but disappeared before the trial, and presumably hid from the Asgardians.

Upon Odin's passing, Hela returned and traveled to Asgard where she claimed the throne while eliminating anyone who opposed her. Heimdall returned upon discovering this, and managed to obtain his sword before Hela could start her plan of conquering the nine realms. He then started to protect his fellow Asgardians from Hela and her army, and while doing so, communicated with Thor on what was happening. When Hela learned of Heimdall and the refugees' location, he decided to travel with them to the bifrost bridge so he could send them to safety.

When preparing to fight against Skurge and Fenris, Bruce Banner arrived and transformed into the Hulk to help them. When Thor, Loki and Valkyrie arrived to fight against Hela and her forces, Heimdall started to evacuate the Asgardians onto the Statesmen as Thor had Loki return Surtur's crown to him so he could commence Ragnarok. Afterward, Heimdall comforted Thor on the destruction of Asgard, reminding him that the realm wasn't a place, but it's people.

The Asgardains and Revengers were attacked by Thanos and the Black Order, who wanted to collect the Space Stone. Wounded and his sword Hofund broken, Heimdall witnessed Hulk attack Thanos until he was swiftly defeated by the Mad Titan. Knowing that Thanos would go across the galaxy and to Earth to collect the Infinity Stones, Heimdall called to his Allfathers to let his dark magic flow through him one last time. Heimdall used his magic to send Hulk to Earth so that he could warn them of the Mad Titan's goal, and was killed by Thanos with Corvus Glaive's weapon.

Thor grieved the lost of his ally, and when Rocket Raccoon asked the demigod if he had any best friends, he simply replied that he was stabbed through the heart. Heimdall was later avenged when Thor killed Thanos at his farm after failing to kill the Mad Titan in Wakanda, and Iron Man would do so when erasing a 2014 time-traveled Thanos and his army during the battle of Earth.

Heimdall was loyal Asgardian, having sworn an oath to the King of Asgard (as shown when Loki took the throne). He showed himself to great sense of honor that he gave Sif and the Warriors Three his blessings to travel to Midgard. Despite this, he showed himself to be capable of disobeying, as he helped Thor in The Dark World, but immediately surrendered when caught by Odin. 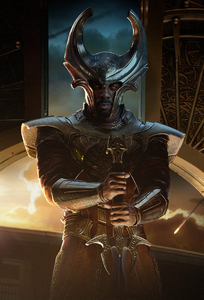 Heimdall with Thor, Hulk, Valkyrie, Korg, and the Asgardians.