Eating
Pretending to be a butterfly

He is a caterpillar with a German accent and a clown in P.T. Flea's circus troupe. He is gluttonous and frivolous throughout, and contemptuous of anyone he considers less intelligent than himself. At one point, he remarks that he dreams of being a beautiful butterfly. At the end of the film, he sprouts a pair of tiny wings, but remains flightless due to his obesity (and because he apparently didn't stay in the cocoon long enough)

He was voiced by the late Pixar storyboard artist, Joe Ranft.

Heimlich is shown to have a gluttonous appetite and is seen eating almost all the time, especially while helping the ants construct a model bird to scare Hopper and his gang. Although brave, he still shows fear when a real bird nearly eats him. Also, when Hopper shouts at the approaching circus wagon, he frightens Heimlich who says he thinks he's going to wet himself.

Heimlich is large caterpillar with a German accent who works as a clown in P.T. Flea's circus troupe. He is very gluttonous and always seems to be eating. Even during a performance, he offered to help finish one of the audience's candy corn. The fly refused, but then it turned out that he got the candy corn anyway. He then later calls the flies "Poo Poo Heads" when Francis is arguing with them.

At the beginning of the film, he says that he dreams of being a "beautiful butterfly." He also at one point turns gray when he sees the mural of him being killed in the battle against the grasshoppers. At the end of the film, he pops from his chrysalis, squeezes out (having only turned blue), and sprouts a pair of tiny wings, finally a butterfly, but still remains flightless (due to his obesity and apparently didn't stay in the cocoon long enough), and it takes the efforts of Francis, Manny, Flik, and a few other ants to get him up in the air. Whilst a caterpillar, Heimlich was carried by the rhinoceros beetle, Dim, for transport. 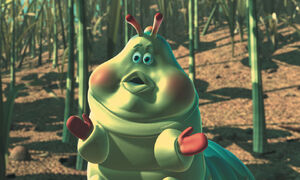 "Yoo-hoo! Mr. EarlyBird! How about a nice tasty worm on a stick?" 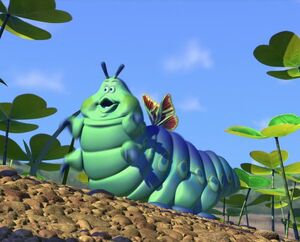 Heimlich metamorphosized into a caterpillar with teeny tiny butterfly wings