Rule the Tri-State Area (failed so many times, succeeded twice, formerly)
Fighting Perry the Platypus and spending time with him (succeeded)

Dr. Heinz Doofenshmirtz is the main antagonist, now a supporting character in the Disney Channel animated series Phineas and Ferb and the arch-nemesis of Perry the Platypus. Doofenschmirtz has actually become one of the most popular characters on Phineas and Ferb despite the fact that his sub-plot never coincides with the main character's. Even at the start of the series when the show recieved negative reviews, many people loved the character of Doofenschmirtz.

Though he is the main antagonist of the show, Doofenschmirtz is actually put in the situation to add comedic tensions. He has several quirks in the series, whenever Perry breaks into his home he says something sarcastic such as "Perry the Platypus how completely unexpected and by unexpected I mean completely expected!". On one occasion he actually made up a word to counteract this while meeting Perry, "Perry the Platypus how completely unpredictabl, and by unpredictable I mean… dictable." Some other noticed quirks is his tendency to put the inator suffix at the end of his evil creations.

Despite the fact that he is the main antagonist of the show, Doofenschmirtz rarely does anything evil and is actually quite moral at times. He helped Phineas and Ferb and the Resistance defend the Tri-State Area from his 2nd Dimmension Counterpart as well Danville from the Red Skull, MODOK, Venom and Whiplash. One of his most redeeming qualities is his genuine love for his daughter, Vanessa to the point where he travelled all over the world with Major Monogram and Perry to get her back. Aside from this, Doofenschmirtz is completely oblivious to most things despite the fact that he himself is a scientist. He has virtually no perception of Perry without his hat, even when his 2nd Dimmension counterpart made it completely clear to him and is incredibly ignorant to the fact that his daughter tries to reveal his evil nature to his ex-wife.

Despite being the source of all evil in the Tri-State Area, Doofenschmirtz can actually go from being a truly ruthless meglomaniac to an actually bumbling and jovial person. Though he does possess streaks of actual villainy for the best part he is actually incompetent, naive and overly dramatic. He also possesses a heavily Germanised accent and tends to speak over the top which he thinks makes him appear sinister and manical but in reality just goofy and eccentric. Doofenschmirtz gets easily envious of his successful brother, Roger who is the mayor of the Tri-State Area and has a tendency to always place the suffix "-inator" at the end of his creations however on one occasion he named his creation, Shrinkspheria as believed the inator was "done to death" and in one episode actually came to the conclusion that him placing "inator" on his evil creations was the cause of the his constant failure so he counteracted this by naming his invention "non-inator".

Over time, Doofenschmirtz has begun acting more out of love for routine rather than actual evil lust something which his nemesis, Parry the Platapus respects and follows. He was clearly hurt when his new nemesis, Peter the Panda sabotaged his inator while he was having a flashback and actually gave Perry's replacement (a rhino) a chance to foil him, claiming "this was more fun with Perry the Platypus" showing despite the fact he receives constant pain from the latter, showing on some levels he enjoys their dynamic routine. It's also revealed despite the face he constantly traps Perry the Platypus, they were designed so that he escape on time.

Doofenschmirtz is also hard to place. While he is goofy, eccentric and bumbling there are occasions when he is an actual mad scientist at heart; conniving, sneaky, a truly diabolical planner and hell-bent on the domination of the Tri-State Area. He also tends to act out of spite for his miserable life other than simple power lust. He was prepared to destroy the entire Tri-State Area's collection of gnomes out of petty vengeance for him being forced to be the garden gnome as a child and actually destroyed Christmas for the entire city of Danville simply becuase he was annoyed with carollers. He also doesn't set his megalomanical standards high, other than the Tri-City Area. Other than this he was genuinely disgusted by his apprentice, Rodrigo's ambition to conquer the world, claiming it was "left-boot crazy".

Despite his bumbling nature, Doofenschmirtz is actually a mechanical genius, able to create countless evil inventions as well his own AI, Norm whom he constantly abuses. There are rare moments when Doofenshcirtz does genuine evil deeds but normally does them for ridiculous reasons such as attempting to destroy the moon becuase he believed there would be "no more stupid camp songs about the moon" and on this regard he also doesn't think on the larger scale of things, being normally quite rash and impulsive; not thinking blowing up the moon would actually destroy the Earth, simply becuase he wanted to impress his professor. On another note he atempted to drill through the Earth and reach China, ignoring the fact there was magma at the centre of the Earth.

He is also poorly romantic, his marriage with ex-wife, Charlene fell apart completely as well she constantly sends him alimony cheques (which he uses to fund his evil innovations) and Charlene is completely oblivious to her ex-husband's evil and maniacal nature. They have a steady and tactile relationship, to this day. On one occasion he actually created a device that would eradicate love from Earth however on the same day he had a date whom he fell head over heals for becuase of their shared interest: evil. However near the end of their date, his anti-love ray ends up zapping her, making her feel nothing for him whatsoever. The only person Doofenschmirtzs shows any care for is his daughter, Vanessa.

Overall Doofenschmirtz remains an embittered, emotionally crippled little boy from the trauma of his childhood (which he uses as an excuse to fuel his evil actions). He was neglected by his parents, overshadowed by his more successful and talented brother and was made a social recluse. Some of Doofenschmirtz's notable backstories is when he won a balloon which he deemed Balloon-y and became his best friend until one day he floated away, forced to be the garden gnome when his family was forced to sell their collection, being forced to wear dresses by his parents as they expected Roger to be a girl and his beloved childhood toy being given to his brother after he just gave it to his mother.

Doofenschmirtz has a dynamic relationship with his nemesis, Perry the Platypus. Though it's been established they are hated rivals, they actually have a frenemy relationship. An example is when Doofenschmirtz replaced Perry with Peter the Panda and the platypus walked in on their battle he was clearly ashamed and attempted hide it like a husband would do if he was caught cheating. Perry himself was clearly depressed that he had been replaced and Doofenschmirtz gave a very heartfelt apology for doing so. Perry and Doofenschmirtz are on a friendly basis, capable of having formal tea together, picking each other up when they are down and even work together at times.

Doofenschmirtz is also a musical buff, normally breaking out in spontaneous song ignoring the fact he doesn't have the best singing voice. He also fawns over his favourite band, Love Handell, normally featuring them in his flashbacks and created his own jingle (which he never finished).

In spite of Doofenshmirtz's reputation as a villain, he will tend to play as the hero whenever it either benefits him the most or if he doesn't have a choice. Such examples are included: 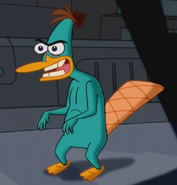 Add a photo to this gallery
Retrieved from "https://hero.fandom.com/wiki/Heinz_Doofenshmirtz?oldid=1247075"
Community content is available under CC-BY-SA unless otherwise noted.