Be the strongest and win countless battles on the battlefield, Find a powerful weapon
Have Soul Edge (formerly)

Mitsurugi is an ambitious samurai who has only one goal in mind: To seek out the strongest warrior and challenge him/her to a duel then become the strongest warrior in history. Although cocky in battle, be does however show honer in the code of the samurai, and as part of that honor, he does not kill his opponents he defeats.

He has a tendency to criticize his opponents if they pull fast ones in battle, or do not fight properly (as shown when he is ringed out).

Mitsurugi, then known only by his first name "Heishiro", was the fourth son born to a Japanese farmer from the village Bizen. After his homeland was ravaged by various hostile forces, Heishiro decided to take up arms and become a samurai. It was not until after his parents died that he finally earned his sword of honor as well as his recognizable title Mitsurugi.

As a veteran samurai, Mitsurugi proved himself to be both a powerful and honorable warrior in battle, as noted by other samurai such as Uesugi Kenshin and Oda Nobunaga; but deep down, Mitsurugi had a more personal desire: he wished to seek out the most powerful warrior possible and challenge them to the duel of the ages.

Over time, Mitsurugi parted ways with the samurai, and instead became a mercenary whenever a war broke out in Japan. Eventually, he heard stories about a newly introduced weapon called the rifle, which had allegedly took down the Takeda cavalry at the Battle of Nagashino. Realizing that the weapon could turn his series obsolete, he decided to take on the task and search for the legendary sword Soul Edge.

Mitsurugi's search for the so-called "Hero's Sword" proved to be fruitless, and eventually he more-or-less gave up the quest and began to take on odd jobs pass the time. Eventually, he returned back to Japan and challenged a man wielding the rifle Tanegashima in battle in an attempt to prove that he did not need the legendary sword. Unfortunately, the battle ended up going wrong, and Mitsurugi was humiliated in battle, complete with a gunshot wound that acted as a scar to his embarrassing defeat. Mitsurugi came to the conclusion that he needed the sword once more, and traveled to Europe in search of the Azure Knight, who allegedly wielded an unstoppable sword matching the description of Soul Edge.

Nightmare's whereabouts eventually disappeared and halted Mitsurugi's search for Soul Edge once more, but this did not deter the samurai, and he decided to return once more to Japan. There, he challenged a man named Teppou Hei, and killed him in a single strike.

Four years pass, and Mitsurugi eventually came across a lead into finding Soul Edge. After saving a man named Xiwei (present-day Xi'an) from a group of assassins, the man handed Mitsurugi a shard of the legendary sword as a reward for saving him. Mitsurugi was skeptical, but nonetheless accepted the gift. Suddenly, a crazeds servant of the Ming Empire barged into the castle, demanding the "Hero's Sword", before being slain. Mitsurugi was forced to leave afterwards, coming to the conclusion that a war was about to begin.

Mitsurugi then traveled across countless battlefields, defeating numerous foes (including ones carrying rifles, the weapon he considered to be his former nemesis). Eventually, he was attacked by a group of ninjas that were after the fragment he was gifted. Although he managed to defeat them one by one, these foes reminded him of the warrior Taki, who always intervened whenever he came close to finding the alleged "Hero's Sword". While unknown on whether these ninjas were affiliated with Taki or not, Mitsurugi surged it aside and became more concerned about what was going on back in Japan,and decided to return home.

By the time Mitsurugi returned to Japan, a mutiny occurred when the daimyo Oda Nobunaga was betrayed by Akechi Mitsuhide, who usurped his position. The Murakami clan, whom Mitsurugi was once affiliated with, decided to dissociate themselves with Japan, and instead turn to a life of piracy. When soldiers aligned with Nobunga's successor Toyotomi Hideyoshi prepared themselves to battle the Murakami clan, Mitsurugi took up arms to assist the clan in the battle against the daimyo's troops. Mitsurugi's skill as a accomplished warrior, combined with the Murakami's clever naval strategy defeated Hideyoshi's army, and Mitsurugi was deemed a hero.

The Murakami commander invited Mitsurugi, where he gave the samurai a reward in coin, but also told him about rumors of an alleged dark knight clad in azure armor terrorizing the European landscape. Believing it was none other than Nightmare, Mitsurugi set off on yer another quest in search of Soul Edge. Upon reaching land, Mitsurugi parted ways with the Murakami Clan and gave all of his money to a boatman before traveling west, determined that if he found Nightmare, he will also find Soul Edge.

Once again, Mitsurugi put aside his search for Soul Edge when his ambition to find a powerful opponent led him to challenged various foes across the land.

Mitsurugi was about to give up his search when he came across a group of assassins in search of the legendary sword. After defeating them, Mitsurugi took out the shard of the sword he had been carrying for awhile now, when suddenly, the fragment began to glow before suddenly levitating and shooting across the sky due west.

Renewing his interest in finding Soul Edge, Mitsurugi chased the fragment in the hopes it would lead him to Nightmare, whom he believed would be the worthy opponent he was in search of for so long.

Mitsurugi managed find himself in the ruins of Ostrheinsburg, where instead of finding Nightmare, he found a portal leading to a strange dimension. Upon entering the portal, Mitsurugi found himself face-to-face with the Hero King of legend Algol atop a gargantuan tower. The two warriors fought valiantly, but when Mitsurugi was about to defeat the hero king, he was sent back to his dimension.

Sometime after the battle, Mitsurugi returned to Japan after hearing word that war had broke out there once more. Upon returning, Mitsurugi missed a chance at battle as the war had ended shortly before he returned. Although Japan was victorious, many samurai (including Mitsurugi) were now left masterless and unemployed. Having no money left from his travels, Mitsurugi decided to retire from his life as a warrior and became a farmer.

17 years went by, and then a group of soldiers came through the land, whispering about the rumors of another legendary sword: Soul Calibur. Realizing that the Hero king that he fought so long ago had possibly returned, Mitsurugi took up his katana once more.

And from there, Mitsurugi began on his quest locate and battle Algol, in an attempt to finish the duel that had been abruptly stalled 17 years earlier.

In and alternate timeline, Mitsurugi is once again in search of not only the cursed sword Soul Edge, but also a worthy opponent once.

After defeating numerous warriors, Mitsurugi came across one that he deemed more formidable than the ones he battled before: a fellow samurai, he challenged the opposing samurai in battle and defeated him in battle, before being confronted by the Edge Master, who invited him back to the ruins of his temple.

During his stay with the Edge Master, Mitsurugi told the old warrior that he was in search of the legendary sword Soul Edge. However instead of being met with astonishment, the Edge Master showed only disappointment and concern. He warned the samurai that the sword was evil, but Mitsurugi shrugged off the warning, believing that he was only trying to delay his quest to find it.

After Mitsurugi left Edge Master's temple, he continued to fight numerous opponents, each growing more powerful along the way. Eventually, Mitsurugi desires to battle the Edge Master, but the old man refuses. Instead, he leads the samurai to a desolate area, before disappearing. Shortly afterwards, Mitsurugi is attacked by Taki.

Believing that Taki is also in search of the sword, Mitsurugi challenges the ninja to battle, despite Taki's warnings about the true nature of the sword. Although Mitsurugi manages to overpower Taki, it is a hallow victory, as Taki leaves Mitsurugi duped by the fact that Soul Edge is nowhere near where they are.

Mitsurugi finds a note left by the Edge Master, in it he discovers that the old warrior had purposely been hindering the samurai on his quest to find Soul Edge, but for a good reason: to protect himself from harm. Mitsurugi smirks, seeing as how he felt for the Edge Master's trick, but vows that the next time they meet, he will challenge him to a battle.

Mitsurugi plays a supporting role in the Libra of Souls campaign in which he acts as the primary tritagonist. After the protagonist parts ways with Maxi, they come across the samurai, who challenges them to a duel. The protagonist defeats Mitsurugi, who deems the them a formidable opponent, and agrees to travel with on their journey. Eventually, Mitsurugi is forced to part ways with the protagonist after becoming concerned about more personal affairs.

Mitsurugi later regroups with the protagonist, and once again challenges them to a battle, which he once again loses, he decides to travel with the protagonist once more after learning that they are on a quest to locate and kill Azwel before he unleashes the Ultimate Seed and presumably destroys the universe.

Eventually the two of them come across a strange ruin in the middle nowhere. There, they witness an astral portal opening and releasing a strange man, who initially acts hostile with Mitsurugi and the protagonist. The man manages to best Mitsurugi, but is defeat by the protagonist. After revealing himself to be Geralt of Rivia, the parts ways, with Mitsurugi behind him, demanding a rematch.

The protagonist eventually finds Arthur, and Mitsurugi challenges him to battle. While it is unknown who wins the battle, Mitsurugi does admit that the battle as very thrilling, and thanks the protagonist for finding Arthur, before parting ways with them for good. 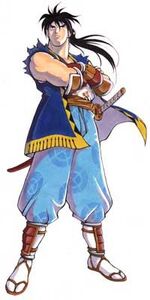 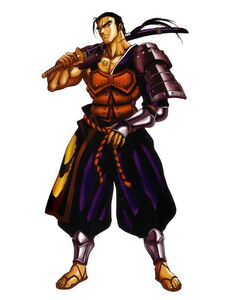 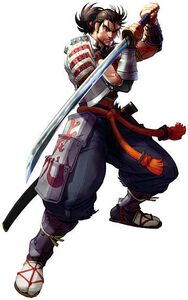 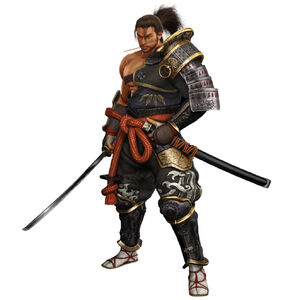 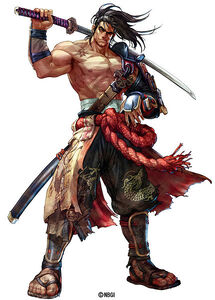 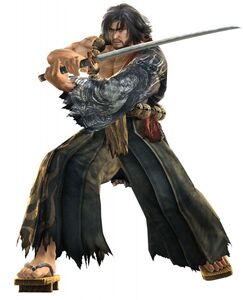 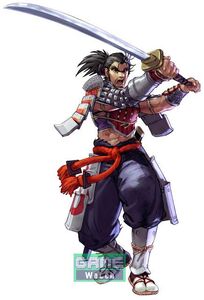 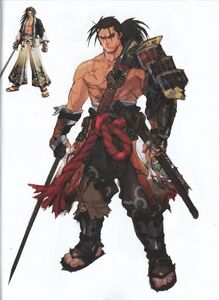 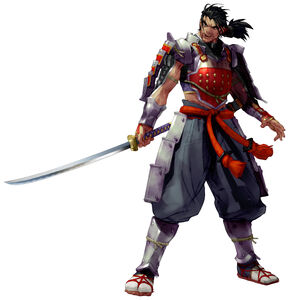 Retrieved from "https://hero.fandom.com/wiki/Heishiro_Mitsurugi?oldid=1858785"
Community content is available under CC-BY-SA unless otherwise noted.