Monster Slaying Warrior, Comic Relief, Good Hearted Bastard
Helen is one of the main protagonists of the manga/anime series Claymore. She is a Claymore, ranked 22nd in the Organization and a member of the Seven Ghosts, as well as Deneve's life-long best friend. She seems to have a large appetite for a Claymore and can often be seen eating an apple. She is also the only Claymore seen eating and drinking for pleasure.

She is voiced by Miki Nagasawa in the Japanese version of the anime and Jamie Marchi in the English version.

Helen has short hair, but unlike Clare's pageboy, Helen's is parted down the middle with one side tucked behind her ear. She wears black pieces of armor on her arms and legs to allow her to stretch her limbs. Helen is usually seen smiling, smirking or snickering. She is 175 cm tall, making her the same height as Miria and Deneve.

When Helen was in the Organization, Helen wore a regulation uniform, in addition to "extenders." These were highly durable, extremely flexible, portions of fabric that provided protection over her arms. These allowed her coverage while using her special attack. This is similar to the material of Alicia's black uniform.

Deserting the Organization after the Northern Campaign, she wears a black jumper, light shoulder plates, and high collar top. She is the most conservatively dressed of the Seven Ghosts, (along with Yuma).

Helen has a unique demeanour compared to the other Claymores. She can be bold, overbearing and brash. She is similar to Noel in these aspects. However, she is also one of the most optimistic and cheerful of the Claymores and tries to enjoy life as much as she possibly can, which explains her unusually large appetite. She makes many attempts to lighten up the "doom and gloom" attitude of her fellow warriors, despite the many grim situations they get themselves into, such as the Northern Campaign.

She shows much more raw emotion than the typical cold, distant Claymore. Despite her tendency to pick on lower-ranked warriors, she is capable of showing great loyalty to her friends as well as those who have earned her respect and will defend them faithfully. Though she is headstrong and often acts before she thinks, she is also able to give good advice when she told Deneve that Claymores were "only human."

However, despite her loyalty, Helen can also be somewhat of a bully who likes to poke fun at people's touchy sides. She is quick to judge, especially towards Claymores in terms of numerical rank, and one has to work hard to change her first impression. As soon as she learned of Clare's low rank, Helen was disdainful at the prospect of working with someone she deemed as weak and did not hesitate to ridicule Clare at every chance she got. Once Clare proved herself in the fight against an Awakened Being, Helen changed her attitude and respected Clare a lot more, eventually becoming friends with her, though she's still mystified that a high-ranking Claymore like Jean would choose to follow her around.

Helen's skills improved so greatly after the 7 year time skip that, while still suppressing her yoki, she could keep up and wound Isley multiple times, before he unleashed his massive yoki.

Helen's unique ability is gained after her half-awakening. She can stretch her arms to great lengths, helping her to reach targets normally out of range for other Claymores. It is possible that she can also extend her legs, though this has never been shown.

During her seven years hidden in the mountains of Alphonse, Helen has learned to suppress her yoki to remain hidden from the Organization.

During her time in Alphonse, she learned to emulate Jean's special attack: "Drill Sword". Unlike Jean, who required time to coil her arm fully and was limited to close range, Helen, due to her extendable arms, can use the Drill Sword almost instantaneously and can also utilize the attack at any range. Also, Jean released approximately 50% of her yoki, while Helen doesn't need to. Helen once referred to her technique as "Tornado Sword". As opposed to Jean, however, Helen's maximum number of "Rotations" was 55 as Jean's was set to 21. 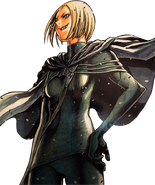 Add a photo to this gallery
Retrieved from "https://hero.fandom.com/wiki/Helen_(Claymore)?oldid=1623540"
Community content is available under CC-BY-SA unless otherwise noted.