Helen Wheels is a Plumber kid. She is the younger adopted sister of Pierce, as well as Manny's partner.

She looks like a regular Kineceleran with three fingers instead of claws and green eyes. She wears a black-green colored outfit.

In Omniverse, her eyes were changed to white. She now has two black lines on the end of her tail and her skin color is lighter with her helmet also being shorter. She now wears a standard Plumber Suit.

Young Helen looked similar to her teenager appearance but she had bigger head and eyes and lacked elbow spikes.

Helen's human form was only seen for a short time. She had flipped-up, spiky light blue hair and wore the Amalgam Kids' outfit. She also had light blue eyes.

Helen is smart, brave, kind, nifty, and level-headed, though at times she usually tries to act rational and wise, making her mostly a mirror image of Gwen Tennyson, as well as an older sister figure for younger Plumbers such as Cooper and Alan. She is shown to be devoted to Max, willing to help him when he was seemingly attacked by Ben.

Helen shares a love-hate relationship with Manny. While Manny is usually hot-headed, aggressive and enjoys using violent methods, Helen is usually more careful and less aggressive, causing occasional arguments. On the other hand, she stated that they worked better teaming together than with other Plumbers, and shows true concern when seeing him injured or in danger.

Being a Kineceleran hybrid, Helen possesses powers and appearance similar to XLR8: her feet end with wheel-like appendices, making her able to move like a roller skater and giving her incredible speed. How exactly fast she can go has not be revealed, but she's shown being able to move fast enough to do the same things as XLR8, such as racing up a wall or creating miniature tornadoes. According to Argit, Helen is the fastest Kineceleran he ever saw.

Helen has also learned how to use her speed to her own and her team's advantage beyond the obvious; during the climax of Above and Beyond, in conjunction with Alan, Helen helped to restrict Humungousaur's movements and range of vision by using the airflow produced by her super speed to fan Alan's flames.

In addition to her powers, Helen is shown to be quite skilled with computers and technology.

Helen's name is wordplay on the phrase "hell on wheels", which is used to describe a person who likes to drive fast and/or recklessly. 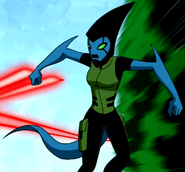