Crime-fighter
Member of Birds of Prey

Send the murderer his mother to justice.
To stop Harley Quinn from taking over New Gotham (all succeeded)

Helena Kyle, also known as The Huntress is the main protagonist of the 2002 live-action series Birds of Prey and a minor character in the crossover event Crisis on Infinite Earths.

Helana a vigilante in New Gotham. Helena is also the daughter of Bruce Wayne and the Selina Kyle. After her mother's death, Barbara Gordon became Helena's legal guardian and formed the Birds of Prey.

She is portrayed by Ashley Scott.

Helena Kyle was born and raised in the city of New Gotham. Her mother was the metahuman Selina Kyle, the legendary "queen of the criminal underworld" who went by the pseudonym Catwoman. Years ago, Catwoman had an affair with her greatest adversary, New Gotham's guardian, the Batman. Selina (presumably retired from crime), raised Helena on her own, and Batman was unaware that he had sired a child with her. Growing up, Helena became close friends with one of the Batman's protégés, Barbara Gordon. Helena never knew that Barbara was also the costumed crime-fighter known as Batgirl. When Helena was a teenager, another of Gotham's many metahumans, Clayface (disguised as the Joker), decided to avenge himself against the Batman by murdering those he loved. He learned of Batman's affair with Catwoman and fulfilled his need for vengeance by pushing her from the roof of a tall building. Helena watched in horror as her mother died before her eyes. Months later, Barbara Gordon petitioned the courts and became Helena's legal guardian. It was at this time that she learned that her father was not only the Batman, but also Bruce Wayne, one of the wealthiest men in the world.

Helena never truly recovered from her mother's death, and the revelation of her father's identity did not serve to bring the two closer together. Batman, still mourning the death of Selina, left New Gotham leaving behind instructions for his butler Alfred to watch over his daughter. Over the course of the next seven years, Helena began to develop her own unique metahuman abilities. She possessed enhanced strength, agility and reflexes which she inherited from her mother. She could leap from rooftop to rooftop with catlike grace, and even possessed a mysterious "sixth sense" that warned her of potential attacks. Like her parents, Helena decided to prowl the nights. She took her father's place as New Gotham's protector under the tutelage of Barbara who had now become the Oracle. Helena was now the Huntress. By this time, Barbara Gordon was no longer using the identity of Batgirl. Around the same time that the "Joker" murdered Selina Kyle, he also learned Batgirl's true identity. He came to her apartment and shot her through the spine, crippling her while cackling "Batgirl – past tense!" Since then, Barbara committed herself to fighting crime in New Gotham from behind a computer screen. Using the alias Oracle, she worked alongside the Huntress and the two became known as the Birds of Prey. Alfred Pennyworth split his time between upkeep at Wayne Manor and supporting Oracle and Huntress at their base of operations – the Gotham Clock Tower.

Although she gained some satisfaction prowling the streets as the Huntress, Helena still had deep-rooted psychological issues. She began taking anger management therapy from a local psychiatrist named Doctor Harleen Quinzel. Little did she know however, that Harleen was once a gun moll for the Joker and desired nothing less than the complete destruction of anything having to do with the Batman. Through her sessions with Helena, she learned about the Birds of Prey.

As the Huntress, Helena remained mostly in the shadows, taking down small-time criminals and anonymously leaving them on the front steps of the New Gotham police precinct. Around New Gotham she was developing her own reputation as some kind of "urban legend." Although there was a healthy metahuman population in New Gotham, most officers of the New Gotham PD placed little stock in this so-called urban legend. One detective however, Jesse Reese, believed the stories that he had heard and was determined to solve the mystery of this strange new hero. While investigating a string of high-profile suicides, he finally came face to face with the Huntress. The Huntress attempted to explain to him that they were both on the same side, serving the cause of justice, but Reese was reluctant to believe her. He tried to bring her in, but the Huntress always evaded capture. The two crossed paths on several cases, and over time, Reese began to trust her and value her commitment to fighting metahuman crime in New Gotham. He was one of the first people outside of the 'life' that she trusted with her secret identity. The duo had a romantic relationship only budding at the end of the series.

In New Gotham, pink hue completely engulfed the sky and all surrounding areas, as far as the eye can see. Helena is running from rooftop to rooftops while trying to speak with Barbara through her earpiece. She is desperately trying to get a hold of Oracle, who through the static communication insists she is sending all relative information.

A brilliant white light begins to consume the city, taking over a tall building. Helena is devastated to lose contact with her friend before she is incinerated by antimatter. After the Paragons and the Spectre created a new multiverse, Helena and her Earth were restored. 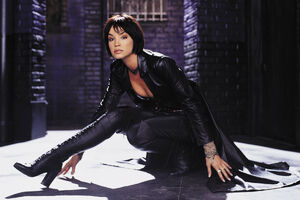 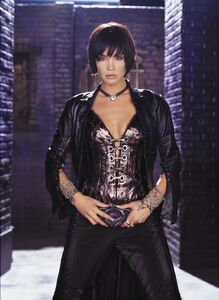 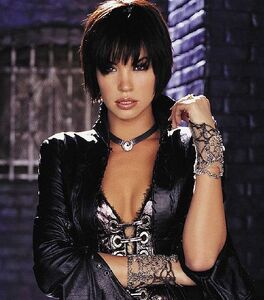 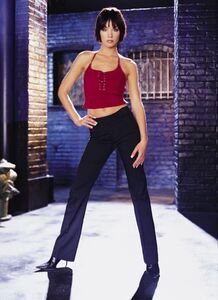 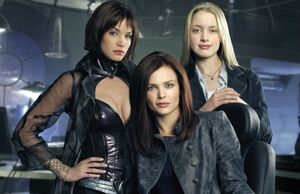 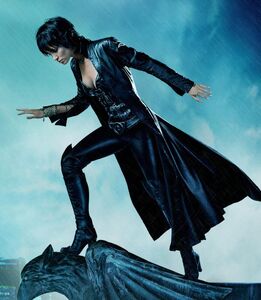