Bully her fourth-grade classmates who gets in her ways (formerly)
Get rid of Arnold and hide her true feelings of love for him (sometimes; formerly)
Ensure that Arnold would never be on her side (sometimes; formerly)
Prove that she is better than her sister Olga (formerly)
Prevent Lila, Ruth and the other girls from hanging around or relationship with Arnold (formerly; all ongoing until the sequel)
Overcome her hateful attitude towards Arnold while hiding her true feelings for him
Confess her feelings to Arnold (both sometimes and furtherly as well as succeeded or failed)
Help Arnold in every adventures (sometimes; succeeded)
Help Arnold and Gerald save their neighborhood from Scheck (Hey Arnold!: The Movie; succeeded)
Reunite with Arnold and help him find his parents (Hey Arnold!: The Jungle Movie; succeeded)

Helga Geraldine Pataki is the anti-heroic tritagonist (but sometimes antagonistic or anti-villain) of the hit Nickelodeon animated television series Hey Arnold! and the deuteragonist of the television film Hey Arnold!: The Jungle Movie. She is Arnold's arch-rival yet love interest, later girlfriend.

She is voiced by Francesca Marie Smith in the series and movies. She's formerly the protagonist bully until she was redeemed later in "The Jungle Movie", where her loyalty towards the football-headed boy in his mission to locate his missing parents opens his eyes to the depths of her feelings. She generally acts like she hates Arnold while she truly loves him which she often hides.

Appearance-wise, Helga is 50/50 between her parents. She has her mother's blonde hair, skin, and head shape. She has her father's unibrow, nose, and ears. She wears her hair in long pigtails without any visible hair ties. In the earlier episodes, her pigtails were longer and thinner, but as the character designs were refined, her pigtails became more short and thick.

In Hey Arnold!, she wears a pink dress with a red stripe over a white shirt and a pink bow on her hair, along with white shoes.

In Hey Arnold!: The Jungle Movie, she wears a similar dress, but without a shirt underneath. As an indication of her age, she also appears more well-developed. Her dress receives an upgrade, becoming more fitting on her shape and gaining a pink stripe under the red stripe, as well as red and white converse shoes, and her pigtails become a tad bit longer and more flowing.

Helga is a tomboyish girl, as evidenced by her interest in playing contact sports alongside her male classmates, blatant lack of femininity, and disregard, to near dislike, for stereotypical female behavior, as seen in the episode "Helga's Makeover". Despite her occasional disdain for more feminine things, on several occasions, she tries very much to make herself appear as an attractive female, with varying degrees of success.

Helga can be very cynical, violent, and a bully, bossing around her fourth-grade classmates with an iron fist, including her best friend, Phoebe Heyerdahl. However, Helga also has a much softer side, which becomes apparent only when she is alone. On instances, she has conformed and tried to protect her friend Phoebe. She dislikes for Arnold on occasions because of his dreamer personality while she mocks his head for being different from most others. She has been periodically been depicted as bully, usually going so far to develop as the anti-hero of the entire franchise.

Several times in the series, Helga has also gone to considerable lengths to make her secret love Arnold happy. Some such episodes are "Arnold's Hat", in which she spent literally hours digging through the city dump to find Arnold's lost hat, and "Arnold's Christmas" in which she gave up a highly coveted gift in order to facilitate the fulfilment of a holiday wish for him.

Helga is heavily emotional, and able to comprehend spectrum emotions such as love and hate. This emotional extremity is a running joke throughout the series, as Helga is often the first to go into hysterics in times of crisis.

Helga is also quite intelligent. In the episode "The Aptitude Test", in which the class takes a standardized exam, it is eventually revealed that Helga achieved a perfect score on the test and the most outstanding result since her perfectionist sister, Olga Pataki, took the test. The types of grades she receives on an average basis in school, however, are low; in the episode "Quantity Time", Helga tells her parents that she failed another math test at school.

Her bad grades are most likely caused by her lack of motivation, attention and academic concern. Mainly, Helga displays a remarkable gift for poetry, creating dramatic soliloquies expressing a situation or feeling with a generous use of vocabulary, especially for someone her age. These instances were more simple in the earlier episodes, but as the series progressed, grew in their intensity. Aside from poetry, Helga exhibits further aspects of cultural experience, being able to identify the work of Edward Hopper and make reference to George Orwell's 1984 in "Helga on the Couch".

Helga also possesses an almost shocking ability to memorize written works. Such examples of this include preparing for a vocabulary contest in "Spelling Bee", and successfully memorizing all the lines of Juliet for Romeo and Juliet in a single night in "School Play".

It is also insinuated throughout points in the series and also stated explicitly as an opinion by her older sister Olga Pataki, that Helga is highly perceptive and a good judge of character. Though her judgement of people is often overshadowed by her feelings, her gruff cynicism or pessimism, emotions and sometimes petty irritations, in the show she has perceived trustworthiness or the lack thereof in characters correctly, including even her own family members. Some such examples are "Olga Gets Engaged", in which she quickly realizes the man her sister is engaged to a is a charlatan, or in "Helga on the Couch" in which she realizes she can indeed trust her psychiatrist.

In this alternate-universe/non-canon film, Helga is shown to have an extensive video library of Arnold which she and Phoebe convince Gerald to use for the contest for the class field trip that Arnold hoped to win to search for his parents, which proves successful. During the trip, Helga attempts to express her true feelings to Arnold who was not in the right frame of mind to hear it at the time and left, abruptly leaving Helga heartbroken to the point she ripped up the picture of Arnold in her locket which she discards along with the fragments in the river. She briefly becomes angry at Arnold though after the class is captured by Lasombra and she sees Arnold crying while looking at a picture of his parents. She forgives him and reaches for her locket only to remember she discarded it but finds that it and Arnold's torn picture were recovered and repaired by Brainy. She convinces Gerald to help her free Arnold so they could reach the Green Eyes before Lasombra got there first. Together with Arnold and Gerald, they manage to find the Green Eyes. Helga also comes up with the idea to use her locket to replace the Corazon which was lost while they were struggling with Lasombra, which activates the mechanism to release the cure to the sleeping sickness curing the afflicted Green Eyes and Arnold's parents. While she was attempting to retrieve her locket Arnold thanked her for all she did and returns her feelings, resulting in them kissing, only to be interrupted by Gerald. At the end of the movie, while it is implied that she and Arnold are now a couple, she reverted to her old ways when Arnold tried to hold her hand on the way to school with Gerald and Phoebe but secretly liked that Arnold made that attempt, implying that she's only pretending to be her old mean self towards him in public to maintain her tough girl reputation at once as well as she learns to get along with him. 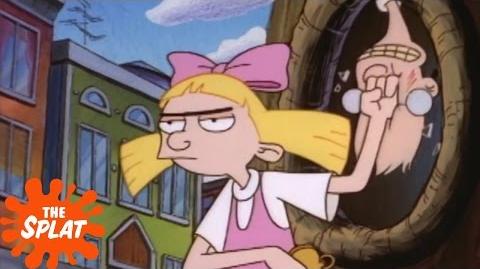 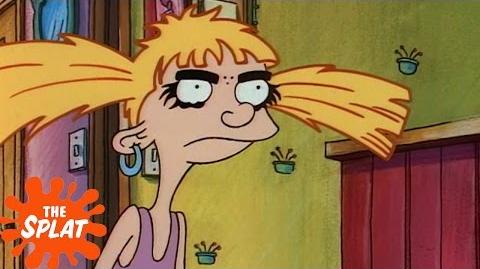 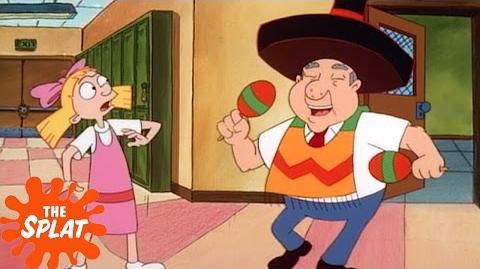 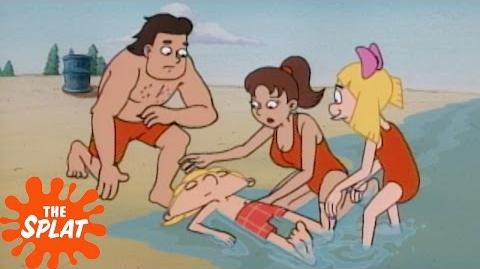 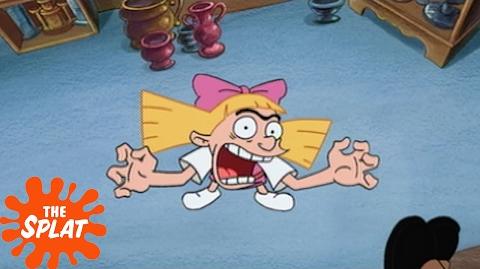 A Deep Analysis of Helga Pataki Hey Arnold! The Splat 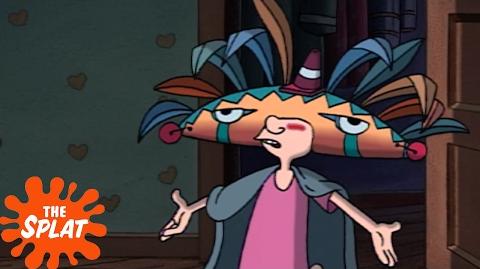 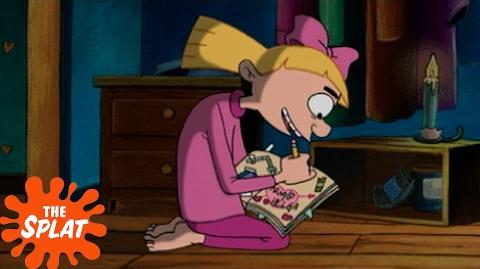