Fighting and killing monsters and demons.
Hanging out with Liz and his own friends.
Petting cats.
Eating pancakes, chocolate snacks, etc.
Smoking cigars.

Prove to humanity that he is not a bad person.
Become part of the society itself despite of his menacing look.
Gain Liz's love back (all succeeded).

Hellboy is the main character in the series with the same name, starring in many comics and novels as well as three live-action films - he is a defender of the human world against a variety of supernatural evils and has his origins near the end of WWII. Raised by a human, Hellboy considers himself more human than demon and for this reason defends them.

He is not without flaws and likes to think with his fists at times, of course being a demon he can afford to be reckless as he is naturally durable and extremely strong - especially in his massive right-arm, known as the Right Hand Of Doom, he is also prone to carrying a small arsenal of heavily-modified guns and other weapons that are designed to combat supernatural beings.

He is also fond of cats and keeps several as pets(in films) and has a passion for cigars - rarely seen without one, he tends to be at odds with his superiors who wish to keep the supernatural largely hidden from the mainstream world - to Hellboy such policies and procedures are nothing but a hinderence and his style of "diplomacy" is to shoot and ask questions later, not that he can't show restraint when necessary.

Hellboy is said to be both humanity's greatest ally and greatest threat as he has the power to destroy the world - although Hellboy has overcome his darkness their are continued doubts over whether or not he can ultimately stop the dark prophecy or not.

In the two live action films directed by Guillermo del Toro, the animated films, and the 2008 video game, he was portrayed by actor Ron Perlman, who also voiced Kurtis Stryker and Scorpion in Mortal Kombat: Defenders of the Realm, Conan the Barbarian in the 2007 titular video game, and played Felson in The Season of the Witch. In the flashback of The Golden Army, he was portrayed by Montse Ribé.

In the 2019 film, he is portrayed by David Harbour, who also plays Jim Hopper in Stranger Things.

In Injustice 2, he is voiced by Bruce Barker.

Hellboy, or "Anung Un Rama," as he was called, was conceived on October 5, 1617, the day his birth-mother Sarah Hughes was on her deathbed. In life, Sarah was a witch who gained her powers from being a consort of the demon Azzael, a duke of Hell who is Hellboy's "biological" father.

Taking Sarah's body to hell when she attempted to repent on her deathbed within a church in East Bromwich, England, Azzael burned her away so their child would be born, and chopped off the newborn's right hand to replace it with the "Right Hand of Doom," a relic tied to the Ogdru Jahad. When the other princes of Hell learned of his actions, Azzael sent his half-demon child away while he was stripped of his powers and imprisoned in ice

Taken by the United States armed forces to an Air Force base in New Mexico, Hellboy is raised by Professor Bruttenholm and the United States Army where the Bureau for Paranormal Research and Defense (BPRD), a private organization dedicated to combating occult threats, begins. However, it is not until he eats his first human meal (a meal of pancakes) that he is forever bound to the mortal world. In 1952, Hellboy was granted "honorary human" status by the United Nations and becomes a member of the BPRD as the "world's greatest paranormal investigator". As such, Hellboy interacts regularly with humans, primarily law enforcement officials, the military, and various "scholars of the weird", most of whom are not presented as overtly reacting to his strange appearance.

As an adult, having matured physically within years and aging slowly while having a teenaged mind, Hellboy becomes the primary agent for the BPRD, alongside other human and quasi-human agents that include Kate Corrigan, a professor of folklore at New York University; Abe Sapien, an amphibian humanoid (Ichthyo sapien); and Liz Sherman, a young female pyrokinetic. But things changed for Hellboy during the events of Seed of Destruction when he found Professor Bruttenholm after he disappeared in a expedition in the Artic, witnessing his adopted father killed by a frog monster. The search takes Hellboy, Abe and Liz to the Cavendish Hall mansion, which was a trap established by Rasputin to have Hellboy embrace his destiny with the assistance of Sadu-Hem. Luckily, Abe impaled Rasputin before his body was incinerated by Liz's firestorm alongside Sadu-Hem.

Soon after, during a visit to Bromwich Church (the place of his "birth"), Hellboy gets a glimpse of his conception 300 years ago and learns he had two human half siblings: a nun and a priest whose spirits haunt the church after they died attempting to stop Azzael from claiming Sarah. Here, it's revealed that he was not a pure demon like many people believed about his nature, but rather a hybrid birthed from a male demon father and human mother. His father was an archdemon named Azzael, and his mother was the former witch named Sarah Hughes. The flashback depicted that after the nun and the priest was killed by Azzael, Azzael claimed Sarah's soul as his for all of eternity, much to Hellboy's horror.

As Hellboy learned his nature from such experience, he send Abe a letter to tell him his story, and begged not to tell anyone else aside themselves know about his discovery.

Hellboy's journey of self discovery led him to Romania to investigate the theft of an ancient box containing the corpse of Vladimir Giurescu, a Napoleonic officer who was in fact a vampire before his assumed death at order of a fearful Adolf Hitler. The culprit of the theft is revealed to be Ilsa Haupstein, one of the surviving members of Project Ranga Rok who was revived from suspended animation and aids Giurescu’s in resurrecting him. Finding Castle Giurescu after splitting up with the other search groups, Hellboy learns that the source of Giurescu's rebirth is the ancient goddess Hecate. Though Hellboy destroyed Hecate's original body, he faces her again after Rasputin unintentionally provided her with Ilsa's iron-maiden enhanced body. Hecate swallows Hellboy, but he returns to his reality after he denounces the dark purpose he was born to perform.

Hellboy later learns that Liz is dying after losing her powers when she accidentally revived a homunculus while searching another location for Giurescu, finding Roger as he convinces the homunculus to save Liz's life.

The Right Hand of Doom

Gaining insight about his stone hand and being referenced as a harbinger of the Apocalyse, Hellboy is accompanied by Abe to hunt down the warlock Igor Bromhead in Box Full of Evil. But it turned out to be a trap conducted by Bromhead and the demon Ualac to capture Hellboy so that the latter can claim Hellboy's normally invisible Crown of the Apocalypse. But this act allows Hellboy to no longer be controlled by his true name as he kills Ualac's mortal body before the demon and the crown are taken to Hell by the demon Astaroth, who is later revealed to be Hellboy's paternal uncle.

After events of Conqueror Worm

Assisted by the ghost of Lobster Johnson, Roger, and Abe, a disillusioned Hellboy resigns from the Bureau before it later gains new agents in Johann Kraus, the spirit of a German medium kept in a containment suit; and Captain Ben Daimio, a special operations soldier that became an Olmec were-jaguar.

When he tries to find out the truth of his existence once and for all, Hellboy ends up being stranded on an island where he inadvertently resurrected an ancient mystic who gained knowledge of the secret history of the creation of Ogdru Jahad and the Right Hand of Doom.

Six years later, Hellboy's search takes him to England where he finds himself in the middle of a power vacuum caused by Bromhead incapacitating Hecate in Italy. Refusing to serve the witches as their king, Hellboy ends up in the dimension of Baba Yaga, a witch who he encountered in the past and happens to be an ally of Rasputin's. Managing to defeat Baba Yaga's champion Koshchei, Hellboy returns to his reality and is led to Bromhead after he became monstrous and in agony from his attempt to take Hecate's powers for his own. Hellboy gives Bromhead a merciful death before returning to England.

The Wild Hunt and Storm and The Storm and the Fury

Hellboy encounters Alice Monaghan, a young woman he saved as a baby from a fairy named Gruagach who has revived the lunatic sorceress Nimue to fill the void left by Hecate. During that time, Hellboy encounters the spirit of Morgana le Fay who reveals to Hellboy both the names of his parents and that Sarah Hughes was her descendant, which names Hellboy as the last living heir to Arthur Pendragon and the rightful king of England. But as he also learns from Astaroth that he is destined to kill Satan and become the new king of Hell, Hellboy is reluctant to wield Excalibur and the army of undead British nobility amassed to face Nimue's army. Therefore, enlisting Baba Yaga's assistance with his eye as payment for the injury he did to her in their first meeting, Hellboy decides face Nimue one-on-one.

But in the aftermath of his battle with Nimue, who was possessed by Ogrud Jahad at the time, Hellboy is killed by the witch in her final moments. As revealed in Hellboy in Hell, Hellboy ends up trapped in the Abyss as he begins a journey to return to the land of the living while learning the full story of his origins. 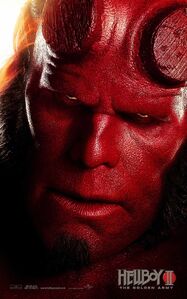 Ron Perlman as Hellboy in the second film from 2008 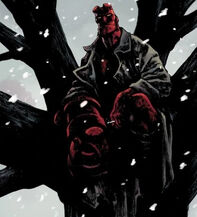 Another image of Ron Perlman as Hellboy 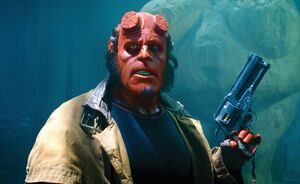 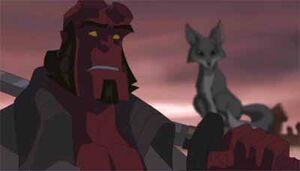 Hellboy in "The Sword of Storm" animated film 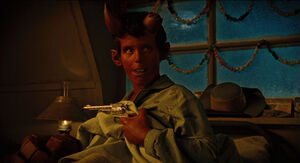 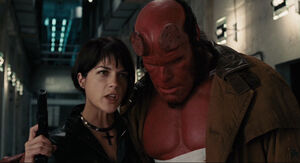 An healing Hellboy with Liz 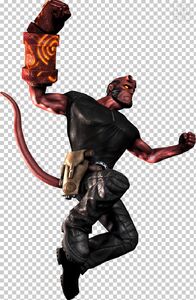 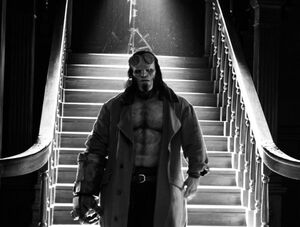 David Harbour as Hellboy in the new live-action film 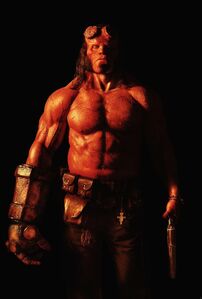 Retrieved from "https://hero.fandom.com/wiki/Hellboy?oldid=1502532"
Community content is available under CC-BY-SA unless otherwise noted.