Hellga is a character from Mini Fighter and a succubus priestess who uses a cross to smash her foes or cast magic on them.

Hellga is a female demon hybrid born between a demon mother and human father. When Hellga was born, her father passed away from a mysterious disease and lives with her mother together. Then, Human hunters killed Hellga's mother. This caused Hellga to be orphaned and now she became a priestess as she got older. She wishes to stop Delta-M and protect human beings. Hellga was raised by nobility, in a wealthy, elegant and seemingly-normal family. However, she has been overcome by an evil urge to bring forth the power of her bloodline. In spite of her beauty and grace, her dark power brings forth enormous energy and powerful magic skills and being faster and stronger than her predecessors, and has rage coursing through her veins. She joined Kang's group to avenge the death of Dr. Shade, the mentor of the heroes.

Physical Features: Hellga is a beautiful young succubus with long curled blonde hair, red eyes, and dark skin. Her ultimate form has pink hair instead of having blonde hair.

Her evolved wears a long white and red sleeveless dress with a yellow belt around her waist, white gloves, white heeled boots, a black circlet with a blue gem on her forehead, blue jewels hanging on her horns, and wears a necklace with a cross.

Hellga is merciless to anybody how dares opposes her. But, she also cares for humanity. She is a seductive and charming succubus who likes to seduce men. She can be a bit arrogant, but she is protective towards others. Many fear her because of her demonic appearance but she is friendly to others.

Hellga can summon giant crosses appearing from the ground and carries a giant cross to smack her foes. Also, she can summon bats as her ranged attack. Her powerful skill uses a powerful swing attack with her cross and uses dark magic to drain the soul of her enemies. 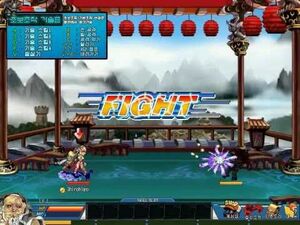 Hellga - Mini Fighter Season 2
Add a photo to this gallery

Retrieved from "https://hero.fandom.com/wiki/Hellga_(Mini_Fighter)?oldid=2210427"
Community content is available under CC-BY-SA unless otherwise noted.