Start his own Superhero career in Dystosia (succeeded).

Henry Prudence Hart aka Kid Danger is one of the two main protagonists (alongside Ray Manchester) of the Henry Danger franchise. He is the titular protagonist of Henry Danger, and a minor character in Danger Force. He goes under the superhero name of Kid Danger when he helped Captain Man/Ray Manchester fight crime. He's also best friends with Jasper Dunlop and Charlotte Page.

Following The Fate of Danger: Part 2 the final of Henry Danger, Henry, Jasper, and cyborg enhanced Charlotte fight crime together in Dystosia to fight crime with his new force field power he gained after saving Swellview and after the defeat his arch-nemesis Drex once and for all, while his younger sister Piper goes to College in Florida and his former mentor Ray and friend Schwoz train the Danger Force.

In the ending of Chapa's Crush, Henry returns to Swellview for currently unknown reasons. In Return of the Kid, Henry returned to Swellview to see his friend Ray and hide from a dangerous bounty hunter named Blackout. With the Danger Force help, Henry manage to defeat Blackout and return to Dystopia.

He was portrayed by Jace Norman.

It all began when Henry was searching for an after-school job. Not having any success, he finds an ad for a part-time position at a store called Junk N' Stuff. Little did Henry know his life was about to turn around when the store's mysterious owner showed him a back door with a secret passage to an underground location. The truth would all be revealed when after a brief interview with an employer named Ray, he revealed himself to Henry as the superhero Captain Man.

Following a subsequent superhero test of skills, Henry would learn Ray was looking for a sidekick, with the hope that someday he would become his successor, as he was now much older and past his prime. Henry would swear an oath, and officially become Captain Man's sidekick, Kid Danger. For a while, Henry as Kid Danger was enjoying being Captain Man's sidekick, and the word quickly spread all over Swellview. However, undecided about whether he wanted to continue being a sidekick when his civilian life started to come back to him, duty calls when Captain Man was kidnapped by a villain named The Toddler. Realizing how important the job of being a sidekick is, Kid Danger, saves Captain Man and defeats the Toddler, proving himself as he is what Captain Man had been searching for. For six years, Swellview now had two heroes.

Over the years he helps Captain Man fought various criminals like the Time Jerker, Dr. Minyak, Rob Moss, and Mole People. A few times people have known his identity like the Game Shakers, Phoebe Thunderman, and the Knight Squad. One time he learned that Captain Man had a sidekick before him name Drex. Drex soon became Henry's rival and eventually archenemy. Henry later gain the power of Hyper-motility to defeat Drex. He lost this power to Mastermind CEO Founder of Twitflash Rick Twitler who he sacrificed to save the internet. They meet Mole people who the gang tries to make peace with but Ray made an enemy with them instead. Drex later return and went back in time to prevent Ray from becoming indestructible. Drex also took his powers but the heroes manage to fix the past in time. Henry sent Drex 100 million years into the past. Later in the final 4 episodes, he learned that he couldn't graduate high school because he devoted his life as Kid Danger. He also reveals he didn't want to take over as Captain Man when Ray plans on retiring in 30-40 years from now. Henry quits his job after a huge argument with Ray but came back after he revealed his secret identity to his parents. After defeating Drex on the blimp it was heading to Swellview Baby Hospital. Ray tells Henry to leave but Henry activates his parachute to save Ray because Swellview needs Captain Man. While Charlotte and Jasper prevent the Man Caves from exploding he tells them to get out which they both made it out in time. Henry steers the blimp towards Mount. Swellview so the blimp wouldn't be sent a whole block on fire.

Following the events of Kid Danger's apparent sacrifice, he, sleep fighting Jasper, and cyborg enhanced Charlotte to go to a new city to fight crime along with his brand new superpower. His sister Piper goes to college in Florida and Schwoz and Ray train the Danger Force to be superheroes.

Though Henry didn't die, Vice Mayor Willard had two statues of him at his funeral. Willard was going to have one of Captain Man but he changed his mind. Mika, Miles, Bose, and Chapa received powers from the Omega Weapon explosion and decided to call themselves Danger Force in remembrance of Kid Danger.

In the spin-off Danger Force, he is mentioned various times so far. He later made a special minor appearance at the end in Chapa's Crush. He then makes a special major appearance in Return of the Kid. Henry has appeared in Swellview hanging out with Ray for 3-4 days, while the Danger Force spends doing dangerous missions alone. Finally when the Danger Force complain about them handling the missions and them getting injured. Henry and Ray decide to go on one. After defeating Jeff by using his Force-Field power to reflect the skunk spray, a Bounty Hunter named Blackout who literally sucks souls out of people comes looking for Henry. Henry Reveals he came to Swellview was to hide from Blackout. Henry calls the Danger Force for backup. The sidekicks and Henry team up and take down Blackout. Afterward Henry is preparing to return to Dystopia and got the Danger Force puppies just as he promise. Henry as well also got a present from Schwoz who put a baby turtle in his pocket. Henry also promised to come back and visit.

He's a nice kid with good friends. He works as Captain Man's sidekick when he's not helping him save the city he's seen making sandwiches for Captain Man. Henry is very ambitious, charming, and sometimes can be naive and a little cocky. He does not like having secrets kept from him, and always sticks up for himself. He is very possessive of his job as Kid Danger. He is superficial but has become less superficial over time. He is also a charmer with infectious enthusiasm when it comes to girls. He is outgoing, yet somewhat awkward. He is cheesy and goofy but in a fun and infectious way. He is very expressive and has a hard time hiding his true emotions. He is courageous, has a sharp-eye, has good instincts, and is a quick thinker. He likes to look neat, and he is aware that he is attractive, but is not arrogant about it. He wants to explore and go outside the box. Even though Henry has many flaws, he cares about his friends and family and has saved many people's' lives.

Relationships With Other Characters

Henry is Captain Man's sidekick. As far as Henry is concerned, this is a dream job. They are close friends, they care about each other. In "The secret beef" Ray says to Henry which he is like a nephew or a little brother for Ray. Henry can be a bit annoyed with Ray's immaturity and stupidity. Following the final Ray finally allowed Henry to leave Swellview realizing he needs to stop holding his friend back. They promised to visit each other during the holidays.

Charlotte is one of Henry's best friends. They've been great friends for many years. They care about each other and they work for Captain Man together since she found out Henry was Kid Danger after becoming suspicious of his many mysterious absences. During the series, fans have guessed they developed feelings for each other since they both know each other more than Jasper does. The two of them along with Jasper fight crime together in the final with Charlotte also is cyborg enhancements (As one of her right arm acts as a screen to tell them the current acts of crime and her eyes change color).

Jasper is one of Henry's best friends. They've been great friends for many years and he tries to help Jasper out. Henry reveals to Henry that he is Kid Danger. Jasper gets a job at Junk'n stuff where they work together. The two of them along with Charlotte fight crime together in the final. Henry was impressed that Jasper actually learned of a fight in his sleep and speak Spanish as he fought 3 of Drex's Cavemen while Jasper had trouble fighting them when he was awake at first.

Schwoz is one of Henry's good friends. Having instantly taken a liking to him since Too Much Game and even finding him funny. Schwoz respects Henry more than he does with Ray. He also invented various inventions to help Captain Man and Kid Danger, though at times he can be weird and funny, which makes Henry and Ray furious.

Piper is Henry's little sister. They are not the closest siblings by any means, but they get by. Piper loves Kid Danger but she doesn't know that he is his older brother. In Tears of the Jolly Beetle, Piper revealed that she thinks Kid Danger (Henry) is hot, meaning that she unknowingly has a crush on her own brother. In JAM Session, Henry comforted Piper about her anger issues and suggested that she go to JAM class. Since Seasons 4-5, they rarely argue nowadays because they improved their sibling relationship. Henry has also told Piper that he loves her multiple times in the later seasons but it is usually in an ironic way. Henry is rather protective of Piper's safety and has had to save her from dangerous situations several times as seen in Balloons of Doom, The Rock Box Dump, Danger Things, and many others, although Piper is unaware that it is her brother repeatedly saving her. Sometimes she helps Henry and Ray in a few missions. In Sister Twister, Piper discovers that Henry is Kid Danger and Henry stops Ray from erasing Piper's memory. After finding out that Henry is Kid Danger Piper became part of the Team.

Henry got along fine with each member from the start. Unlike Ray, he got on Chapa good side in Game of Phones, got along with Miles and Mika in Escape Room, and Is nice to Bose at The Beginning of the End. He recruited Mika and Miles to help him find Ray and he even let them help with the Omega Weapon. After the Omega Weapon exploded all five of them got Superpowers: Henry got Force-Field Barrier (Green), Chapa got Electrokinesis (Red), Bose got Telekinesis (Blue), Miles got Teleportation (Yellow), and Mika got Sonic Scream (White). It unknown if they know that he is Kid Danger. Henry made a special appearance in the Spin-off Danger Force. When one of Henry's Dystopia enemies arrives, Henry and the Danger Force take him down easily. In the end Henry convinced Ray to get each of them puppies for coming to save them. 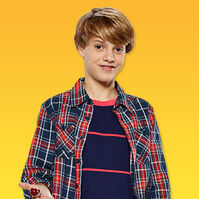 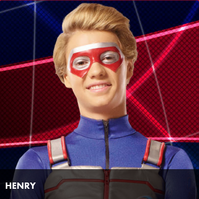 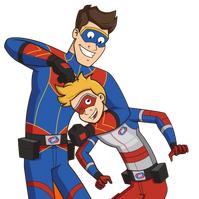 Henry super-fast reflexes in the cartoon

Henry and Ray using Paragliders to Glide through the sky 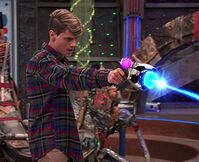 Henry and Jasper in Dystopia with new Gumballs tubes 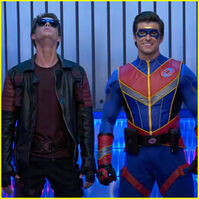 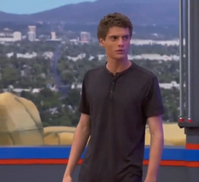