Stealing valuable items as a way to make money.

Break into the bank

Anti-Heroic Thief
Henry Stickmin is a resourceful criminal and the titular anti-heroic protagonist of the franchise of the same name. Henry begins the series as a villainous thief, but in many possible endings turns from his greedy ways and redeems himself. He is very unlucky yet lucky at the same time, oddly enough.

Henry is known to be very clumsy, which results in his hilarious failures, which is what most people love about him. However, he always seems to get into a lot of trouble. Being a "Pure Blooded Thief" and all, it's hard not to find himself in some sticky situations.

Henry is a very lucky but also unlucky person. Sometimes, he is dumb and thoughtless, which has led to his incarcerations. He is also very aggressive in fighting. He often imagines himself to be epic and acts in a grandiose manner, but this cockiness usually makes him fail. He is probably in need of money in some way because he always tries to steal it whenever he gets a chance. This will usually land him in trouble.

He has been in prison many times and he has a mobile phone full of attorneys. Henry very often uses his teleporter device. He usually fails with it, the only exceptions being when he tried to steal the diamond undetected, when he gets teleported to the roof of the museum, which made his theft easier; and when he angrily smashes it when in the Toppat Orbital station to get the Norwegian emerald, when he gets teleported all over the place before ending up in the vault. Other powers he is seen using include magic and bending abilities (metal-bending in Infiltrating the Airship and Earth-bending in Fleeing the Complex).

Despite his thieving nature, Henry is capable of doing right things and can also be a helpful person depending on the player's choice. Henry can choose to free Dave from The Toppat Clan's captivity, a guard who is ironically guilty for his prison outbreak. He can also help his cellmate Ellie in the complex. In Infiltrating the Airship, he can be a man of his word in both GSPI and RBH to Captain G to deliver the Toppat Leader to him or evidence of the Toppat Clan being criminals, who in return is clear of all charges of his crimes including being let go in the second ending, PBT. Also, in IRO ending of Fleeing the Complex, Henry gets help from Charles, a military pilot to get out of the Russian maximum-security prison called The Wall.

Henry also doesn't seem to talk much and mostly act rather than talk. He can talk in a couple of fails, however; the grenade belt in Escaping the Prison, the branch fail in Stealing the Diamond, and so on, though he never uses full sentences and speaks mostly with single words.

Although Henry is a human (in stickman standards), he possesses some supernatural powers. In Breaking the Bank, Henry ties the knot from the inside of bag, which is impossible. In Escaping the Prison, he somehow catches and returns a rifle round at extreme velocities, easily defeating captain Ed Roberts. He also has access to a variety of unconventional and absurd items. 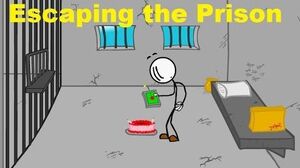 Escaping the Prison Breaking the Bank (no commentary) 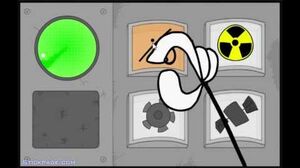 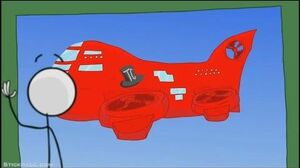 Infiltrating the Airship (no commentary) 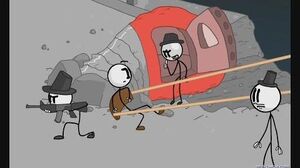 Fleeing the Complex (no commentary) 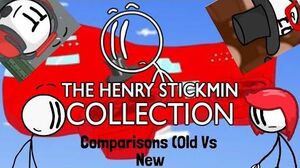