Queen of the Olympian Gods

Goddess of Marriage, Compassion, and Feminism

To reunite with her lost son
(suceeded)

Pain and Panic
The Titans

Hera is the wife of Zeus, the queen of the gods, and the mother of Hercules in the Disney animated movie Hercules. She is the goddess of marriage.

She was voiced by Samantha Eggar.

In the movie Hera is the doting mother of Hercules. Hera, along with Zeus is left devastated when Hercules is removed from Olympus and made mortal, thus making retrieving him not a possibility as mortals can not enter Mount Olympus. Hera has little else to do in the film other than attempting to fight the Titans at the films climax, though she is of little help and captured along with many of the others gods.

Hera is a recurring character for the series Disney's Hercules: the animated series. In the series Hera is still rarely used but has some greater roles than her movie debut. Hera rottenly tries to offer Hercules advice that Zeus about being himself when Zeus puts to much pressure on him and gives him some much needed parental levity to off set the sensationalism and machismo of her husband. At one point in the series Zeus is forced to admit that when he fought and beat the monster Typhon he was actually helped by Hera, who did not make it into the myth. In truth it appears Hera has helped her husband more than once through-out his adventures but forfeited the lime-lite to help him maintain his image as a one-man army. Hera temporarily left Zeus when she thought he was being insensitive and after being egged on by Hades however Hercules would reunite the two. Hera can wield her husband's lightning bolts just as skillfully as he can. In general Hera was the major nurturing influence in Hercules' life outside his mortal parents. 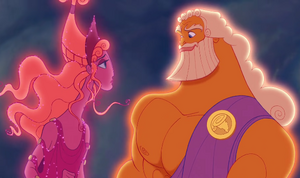 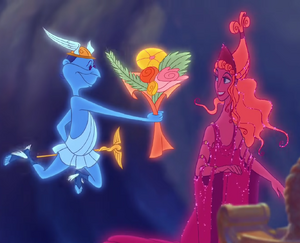 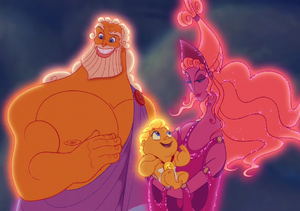