God of Travelers and messenger of the Gods

Speedster Deity
Hermes is the messenger of the Gods and a supporting character in Disney's Hercules and its animated series. Just like his mythological counterpart, he is the fastest of all the Greek deities and thus sends and receives messages to and from both mortals and gods alike.

He is voiced by Paul Shaffer.

Hermes is very bright and outgoing for such a deity, often to the point of being the god that's the most naive of Ancient Greek culture and more familiar with modern aspects instead. He often attempts to catch the attention of the female goddesses for his skills in speed and (coincidentally) music.

Of all the Greek deities, Hermes is the one that interacts with mortals most frequently, as he can be summoned without praying at a shrine or temple dedicated to him.

He is first seen flying through Mount Olympus delivering flowers for Hera as a present for the birth of her new son Hercules. However, when Hercules gets kidnapped by Hades' minions, he and the other gods are sent by Zeus to search for his missing son. The plan however fails, and Hercules is never heard from again until he becomes a young adult.

Towards the climax, Hades tricks Hercules and makes a deal with him to give up his strength in order to free Megara. Because of this, he locates Tartarus and frees the Titans to invade Mount Olympus and overthrow Zeus. Hermes, along with the other gods try to fend off the Titans, but are unsuccessful and are captured by Hades and his minions. However, thanks to a sacrifice by Meg, they are freed soon after by Hercules, who then sends the Titans to oblivion.

Later, after Hercules retrieves Meg's soul and is restored to full godhood, Hermes is seen congratulating Hercules and then declares a celebration alongside the Muses after Hercules decides to give up his immortality in order to live a life with Meg.

Hermes has a very minor role in the Olympus world, where he and Apollo are freed from Hades' shackles by Hercules and Pegasus right before Sora, Donald, Goofy, and Hercules fight the Titans. 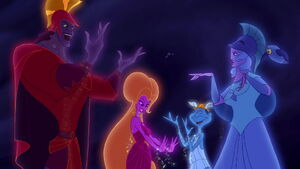 Hermes and the other gods being freed by Hercules