< Hero
View source
watch 02:56
Raise a Floppa - The Loop
Do you like this video?
Play Sound

Defeat the evil fiend Baramos, Defeat the archifiend Zoma after his reveal (all succeeded)

Warrior, Adventurer, Leader
The Hero/Heroine is the protagonist of Dragon Quest III and a legendary hero in the series. Despite not having a name in his/her game of origin, he is generally referred to as Erdrick (ロト, Roto), a title bestowed to him/her.

Despite only making an appearance in one game (not counting appearances in spinoffs and such), the legacy of this hero would live on in the "Erdrick Triology", consisting on Dragon Quest III, Dragon Quest I and Dragon Quest II, in this chronological order. This Hero is also notable for being the first whose gender can be chosen by the player.

Both Heroes are of average height and build, and they have spiky, dark brown hair. Around their forehead is a silver circlet inlaid with a green gem. They wear a long blue tunic over a yellow long-sleeved shirt and pants, a pair of knee-length leather boots, leather gloves, and a long purple cloak around their necks. They wear a brown leather belt around their waist, and a scabbard strapped to their back. A notable difference between them is in their heights: the female counterpart is slightly shorter than the male Hero. Her hair also sticks up less and she wears a pair of green earrings.

The Hero wields a simple sword and a grey heater shield with an insignia of a dragon's head and two crossed swords on the front. The hero's outfit is slightly different in the Famicom illustrations, having a gold circlet with a blue gem around their forehead, and a dark blue cloak around their neck. They are seen carrying a cutlass and a round version of the Hero's shield. There were also no illustrations of the Heroine until the Super Famicom remake: in certain illustrations, the Heroine's outfit is more feminized, making her blue tunic a strapless mini skirt, and giving her knee-length yellow stockings instead of pants, as well as elbow length yellow sleeves.

The Heroes are often praised and celebrated for their courage and heroism, being pillars of goodness and bravery, taking on impossible tasks and coming out on top through many hardships and tribulations.

On their sixteenth birthday, the Hero is summoned and given by the King of Aliahan the challenge to rid the world of the evil archfiend Baramos , who threatens to destroy the world and had begun to exert his vile influence upon the monsters of each continent to drive them mad and violent. This was a task once given by their father Ortega, who failed it, seemingly perishing in a volcano during his fight with the monster. The Hero then recruits up to three traveling companions and sets out to defeat the demon while making his or her way through the world and saving several locations from doom.

A major portion of the adventure is roaming around the world to acquire the last two of the three keys needed to open doors throughout the game. The world in question is very reminiscent of our own in the distant past; many areas are modeled after different cultures like Romaria (Rome), Isis (Egypt), Jipang (Japan) and Persistence (Native Americans) and are located in areas of the map roughly equivalent to their inspirations. During the party's travels, they will hear tale of six mystical orbs said to contain incredible power, and that these will be necessary in overcoming Baramos.

After saving a young couple of the town of Baharata from the rogue Robbin' 'Ood (roughly based on the thief Robin Hood), Erdrick receives a Black Pepper, which he trades for a sailing ship at Portoga (Portugal). With this ship, the hero acquires the Ultimate Key and searches for the six mystical orbs which are used to revive the legendary bird Ramia. The bird then takes the hero to Baramos' castle, where he finally confronts the fiend. After a ferocious battle, Erdrick emerges victorious. However, the Hero's celebration is cut off as Zoma , Baramos's master and the game's true villain, reveals his existence. He attacks and opens a pit to the Dark World, which the Hero jumps into. In the dark world (which is, in fact, Alefgard, a land featured n the previous Dragon Quest games), the hero acquires the Sunstone, the Staff of Rain and the Seal of Rubiss. These items are then exchanged for the Rainbow Drop item, which creates a bridge leading to Zoma's castle for the final battle. After the archfiend is slain, the king of the dark world will give the highest honor to the player and the namesake of this protagonist: the title of Erdrick.

Their influence in the series is very notable: in games that follow the events of Dragon Quest III, Erdrick's equipment is adquirable in Dragon Quest I and II and is arguably the most powerful equipment in the games it makes an appearance. The set, named the Erdrick Equipment, consists of their sword, shield, armour and helmet. On top of that, it's revealed that the heroes from the first and two games are his descendants.

While Erdrick themselves do not make an appearance in this game, it is possible to replicate their outfit by receiving pieces from defeating either Baramos or Zoma, who appear as Legacy Bosses in the game. An accolade is conferred to the player after wearing all of the pieces of this outfit.

The set consists of:

In this game’s true ending, the beginning of Dragon Quest III is shown, with Erdrick appearing at the end to be awoken by their mother before setting off for Aliahan castle.

The male counterpart of Erdrick makes an appearance in the Nintendo crossover fighting game Super Smash Bros. Ultimate as one of the four heroes representing the Dragon Quest universe. He, alongside fellow heroes Luminary, Solo and Eight were revealed at the E3 Nintendo Direct alongside Banjo and Kazooie on June 11th, 2019, releasing on July 30th, 2019 as part of Challenger Pack 2. They are the second third-party representative from Square Enix following Cloud Strife from Final Fantasy VII. The Heroes

are classified as Fighter #72, being the second DLC characters included in the Fighter Pass after Joker from Persona 5. In their reveal trailer, "Heroic Encounter", Erdrick, Solo and Eight appear to aid the Luminary after the former is defeated and seemingly cornered by a bunch of puppet fighters controlled by the evil deity Dharkon. Ultimate is also the first game with official voice acting for Erdrick: he is voiced by Nobuyuki Hiyama, who is notable for his roles as Guy Shishioh from The King of Braves GaoGaiGar, Hiei from Yu Yu Hakusho and Adult Link in Ocarina of Time, Smash 64, and Melee. In his release trailer, Sakurai mentioned that out of the four Heroes, his recording session was completed the fastest due to his extensive experience. 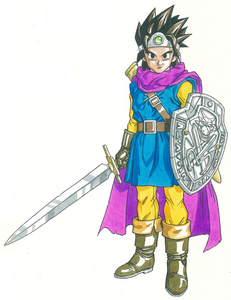 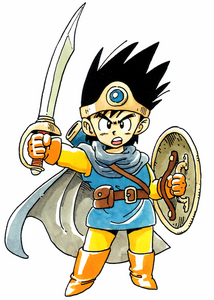 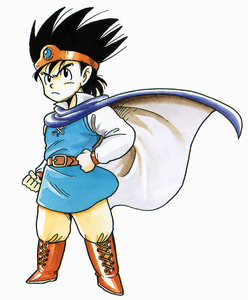 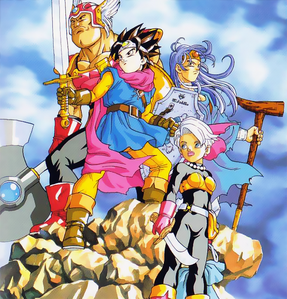 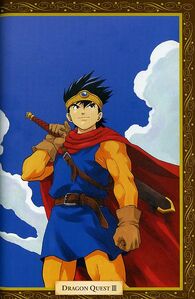 All of the Heroes' renders in Super Smash Bros. Ultimate 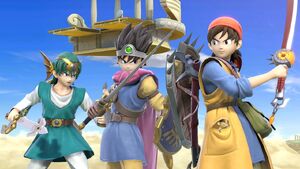 Erdrick alongside Solo and Eight in Super Smash Bros. Ultimate 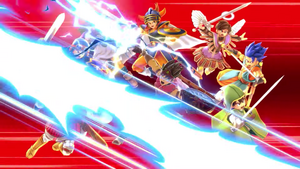