To get back to the North Pole Square with Hero Girl and Billy (succeeded).

To get the first gift (succeeded).

Chris, better known as the Hero Boy, is the main protagonist of The Polar Express. He always tries help children to get on the Polar Express Train to get to the North Pole. He is portrayed by Tom Hanks, who only did his adult narrative voice and motion-capture, but his on-screen voice is done by Daryl Sabara, who also plays Juni Cortez in the Spy Kids Franchise. He is modeled after Josh Hutcherson, who also played Jesse Aarons in Bridge to Terabithia and Walter in Zathura. (Another movie based on a book by Chris Van Allsburg)

At first, Hero Boy did not want to come aboard the train as he found it too crazy to believe that a train was outside his house, but he ends up running aboard the train before it picks up speed. On the train he encounters multiple events with the Hero Girl a Hobo/Ghost, and the Conductor. Throughout the whole ride to the North Pole, he questions whether any of the events were real or if it was all just a dream. That theme occurs throughout the whole film and it is eventually left up to the audience to decide if it was a dream or not.

At the North Pole, he, the Hero Girl, and Billy (unknowingly followed by Know-It-All) end up accidentally exploring most of the area due to the observation car becoming a runaway. This including Santa's Workshop. After he and Hero Girl chase Billy and his new found gift in the workshop, they end up in Santa's Bag with the Know-It-All kid who had followed them around the whole time (but was unseen). After that, Santa Claus arrives, but the Hero Boy cannot see him, nor can hear "the most beautiful sounding bells in the world" according to the Hero Girl. When a bells falls off a reindeer and lands at his feet, he still can not hear it until he says to himself, "I believe." After that, Santa walks up to him and gives him the first gift of Christmas: the sleigh bell that landed at the boy's feet just then.

When he got back on the train, he discovered, because of the hole in his pocket, the sleigh bell was gone, yet the next Christmas morning, Sarah, the Hero Boy's sister, finds a present which contains the sleigh bell and a note from Santa Claus himself, telling the Hero Boy he had dropped it on his sleigh the night before. The boy's parents could not hear it but the boy and sister did believe, which was the only way to hear it. The boy as a grown-up narrates the end saying even as he grew up he could still hear the bell, but most of his friends, including Sarah, could not. This ending leads the audience to believe the whole story was not a dream, but it is up to them to decide.

The boy sleeping in his bed.

Hero Boy waking up at the sound of sleigh bells.

Hero Boy getting up out of bed.

Hero Boy looking out through his window.

Hero Boy checking if there are presents under the Christmas tree, if the stockings are full, and if the glass of milk and cookies have been eaten.

Hero Boy seeing that Santa Claus has not come.

Hero Boy realizing it's just his father with his little sister, Sarah.

Once he returns to his room, Hero Boy peeks through a keyhole to spy on his sister and parents.

Hero Boy in deep thought after watching his parents tuck his sister into bed.

Hero Boy looking through his newspaper and magazine articles on people being unmasked as Santa Claus.

Hero Boy looking through a book on information on the North Pole.

Hero Boy reads that there are signs of living creatures at the North Pole.

Hero Boy pretending to be asleep when his parents come to check on him.

Hero Boy hearing his father comment on the "end of the magic."

Hero Boy being kissed good night by his mother.

After his parents leave, Hero Boy thinks of what his father had said.

Hero Boy wakes up at the sound of sleigh bells.

Hero Boy slowly gets out of bed. 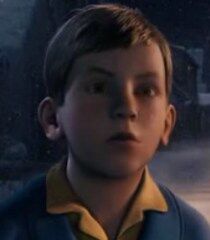 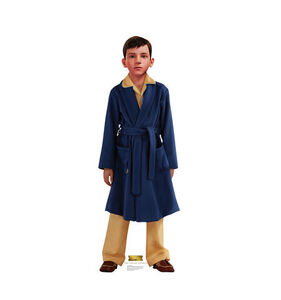 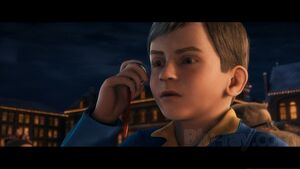