To get back to the North Pole Square with Hero Boy and Billy (succeeded).

Kid Hero
Hero Girl is the deuteragonist of the 2004 animated film, The Polar Express. She's a young girl who is widely recognized by her looped braided pigtails, pink pajamas, and pale brown complexion. She appears to be between eight to ten years old and is rather mature for her age.

She is voiced and mo-capped by Nona Gaye while her singing voice is provided by Meagan Moore.

Hero Girl befriends Hero Boy and Billy and leads them on their adventures on the Polar Express and North Pole. She seems unsure of herself at first, but gains confidence towards the end of the film and becomes a leader. She is the first to befriend Billy the Lonely Boy, bringing him hot chocolate and singing "When Christmas Comes to Town" with him. Hero Girl is shown to know the true meaning of Christmas, for she could hear Santa's bells at the end of the movie. When they re-board the train, the Conductor finishes punching into her ticket the word, "LEAD."

On the Polar Express

Hero Girl first appears when Know-It-All asks Hero Boy about the type of train they are on, responding to the question by saying it is a magic train going to the North Pole. She also watches the Christmas display in front of Herpolsheimer's with the other children and expresses how beautiful she thinks it is. Later, when Hero Boy gets in trouble for pulling the emergency brake, Hero Girl stands up for him and explains that he was just trying to help Billy get on the train, so the Conductor lets him off with a reminder of the train's tight schedule.

After that, the waiters begin serving hot chocolate to the children. Hero Girl hides a cup under her seat to give to Billy later and is given another cup afterwards, which she drinks herself. When the waiters leave, she goes to the observation car to give the cup she saved for Billy, but not without the Conductor assisting her. However, Hero Boy finds her ticket, not punched, left on her seat. He goes to return it to her, but while trying to cross over to the other car, the wind blows it away. It gets stuck to a window, but as Hero Boy opens the window to try to retrieve it, it gets blown away again. It lands in the woods and is blown away one more time when a pack of wolves run by. An eagle catches it and flies back to its nest to feed it to its baby, but the baby spits it out. It lands in the snow and rolls down the hill, creating a big snow ball. The snowball breaks after hitting a rock and the ticket lands on the pilot of the locomotive, then gets blown underneath the train, back into the passenger car, and sucked onto the radiator.

Later, the Conductor realizes he forgot to punch Hero Girl's ticket, but since she cannot find it, the Conductor takes her on top of the train and they walk across the cars. Know-it-All thinks she is going to get thrown off, also pointing out that the train will slow down, but not stop, giving Hero Boy the idea to stop the train again. However, he finds Hero Girl's ticket before doing so, grabs it and goes after Hero Girl and the Conductor. While walking on top of the train, he meets the Hobo, who helps him get to the locomotive right before the train enters Flat Top Tunnel. There, he finds out that Hero Girl was made to drive the train while Smokey and Steamer fix the locomotive's headlamp.

Suddenly, Smokey and Steamer see something ahead on the track call out to Hero Girl to stop the train. Hero Girl claims to knows which is the brake, but loses her confidence when Hero Boy asks if she is sure, since he thinks a different lever looks more like a brake. He eventually goes with Hero Girl and stops the train right before it crashes into a herd of caribou. After the track is cleared and the train is on its way again, Hero Boy notices that the train is going too fast. Hero Girl tries calling out to Smokey and Steamer to slow down, but they were too busy trying to fix the jammed throttle to listen, so the Conductor uses the ropes from Hero Boy's robe to fasten him and Hero Girl to the safety bar in preparation for Glacier Gulch.

After Glacier Gulch, the train speeds onto the Ice Lake and tilts after hitting an iceberg, causing Hero Girl to nearly slide off. The Conductor and Hero Boy grab her, but they are unable to pull her to safety. Luckily, the Hobo shows up and helps, but disappears before anyone but Hero Boy could see him. While Smokey, Steamer, and the Conductor try to get the train back on the tracks, the wind blows Hero Girl's ticket out of Hero Boy's slipper. Hero Boy and Hero Girl manage to grab it right before the train gets back on the rails. The Conductor, after overhearing Hero Girl thank Hero Boy for finding her ticket, punches "LE" out of it, the same thing Know-It-All got.

The Conductor leads Hero Boy and Hero Girl back to the passenger car, going through the abandoned toy car along the way. While there, Hero Girl expresses how sad she finds the sight of toys that were treated so horribly. Next, she and Hero Boy notice Billy looking out from the back of the train and singing "When Christmas Comes to Town," which Hero Girl joins in.

At the North Pole

When the train arrives at the North Pole Square and everyone gets off, Hero Boy and Hero Girl notice Billy staying behind. Hero Girl tells the Conductor, who says he is not required to come, but they go back to try convincing him to come anyway. However, Hero Boy accidentally steps on a lever which uncouples the car, causing it to roll away down a hill. It stops on a turntable at the end of the tracks and the children get off and try to find their way back to the Square by following the sound of the silver bells, which only Hero Girl and Billy can hear.

Along the way, they pass through the Communications Room where a few elves leave on the pneumatic to go to the Square. The children decide to use the pneumatic too, but they end up in the Sorting Room where they find one last present, meant for Billy, on the conveyor belt. Billy grabs onto the present and Hero Boy and Hero Girl follow. They go down a slide, into a black hole and onto a big pile of presents. Billy is tempted to open his present, but Hero Girl finds a note on it that reads, "Do not open until Christmas." Suddenly, the presents get enclosed in a big bag and carried to the Square by zeppelins. Hero Girl also helps Billy get free from Know-it-All, who mistook his leg for a present. After the bag is landed on Santa's sleigh, the children are rescued by the elves. Hero Girl is the second one to slide down the bag.

Before Santa announces who will receive the first gift of Christmas, he speaks with the children, complimenting Hero Girl for her confidence and Christmas spirit. Hero Girl, along with the other children, also watches Hero Boy being given the first gift and Santa Claus fly away in his sleigh to deliver the presents.

For the return trip, Hero Girl's ticket is punched again with the resulting word being "LEAD" (leed), which she initially reads it as the metal lead (led) before being corrected by the Conductor. She is also one of the children wanting to see Hero Boy's silver bell, only to find out he lost it.

When the train stops at Billy's house, Hero Girl gives Billy a hug and wishes him a merry Christmas. She also notices Billy showing her and Hero Boy that his present has arrived. Before Hero Boy exits the train to go home, she and Know-it-All say goodbye to him, still feeling sorry about the bell.

The Polar Express: The Video Game

When Scrooge steals all the children's tickets, Hero Girl and Hero Boy decide that Hero Boy goes to help everyone find them while Hero Girl stays behind to distract the Conductor. Soon, everyone's tickets were found, which made Scrooge angry, so he steals Hero Girl's ticket and sticks it to the air vent, leading to Hero Girl being taken to the engine room to drive the locomotive. Hero Boy finds the ticket, goes after her and makes it to the engine room with the Hobo's help. However, he forgets to return the ticket to her until after the caribou clear the track. When he does, they return to the passenger cars, but on the way, they encounter Scrooge again. Hero Boy defeats him by throwing snowballs at his chest. After that, the Conductor shows up and invites the children for refreshments in the dining car. Since Hero Boy was taking over for a missing waiter, Hero Girl saves him a refreshments, then she and the Conductor go to give some hot chocolate to Billy.

Later, Hero Girl, Hero Boy and Billy become stuck in the runaway observation car. The children use the brake wheel to tilt the car and avoid hitting various obstacles along the tracks. Soon, the car stops and the children get off to find a way back. They witness the elves using the pneumatic and decide to ride it as well, but they have to hit the switches that open the correct gates. The pneumatic stops at the Wrapping Room where Billy catches sight of a present that might be for him and follows it. He loses Hero Girl and Hero Boy, however, but they manage to reunite with him after finding their way through the tunnels and conveyor belts. Next, they find themselves at the bottom of the big present pile. They think there might be a way out at the top of the pile, so they climb up it. Then, the presents are enclosed in a bag, which is carried to the Square by a pair of zeppelins. The children are taken on board by the Elf Captain, who is glad to see them as he needs someone to drive the zeppelins while he helps the other elves. Hero Boy offers to help. When the Captain returns, the children go back to the bag, which they are rescued from by the elves after it is landed on Santa's sleigh. 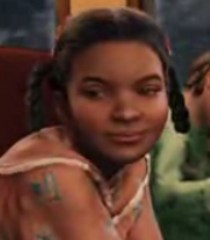