The Heroes Wiki is an off-shot of the "Villains Wiki" and is designed to be a comprehensive database of heroes from all media - ranging from cartoon shows of old to epic dramas, video-games and movies.. Heroes are an ancient traditional spanning across almost all cultures and capturing the imaginations of young and old - this wiki seeks to pay homage to those childhood fantasies as well as characters who continue to inspire us well into our adult life...

The Heroes Wiki is an off-shot of the "Villains Wiki" and is designed to be a comprehensive database of heroes from all media - ranging from cartoon shows of old to epic dramas, movies and video-games. Heroes are an ancient traditional spanning across almost all cultures and capturing the imaginations of young and old - this wiki seeks to pay homage to those childhood fantasies as well as characters who continue to inspire us well into our adult life.

Kratos (Greek: Κράτος), also known as The Ghost of Sparta and Fárbauti (by the Jötnar), is the titular main protagonist of the God of War video game franchise. He is a Spartan warrior that is a demigod that would become the slayer of Gods, ending the Greek pantheon. Though he eventually transforms into a more villainous character as his thirst for vengeance consumes him and causes him to destroy the world, initially Kratos is more of a gray character, acting as a sort of anti-hero who fights against corrupt gods and their forces but in a very brutal and violent manner. Kratos is (or was) a destructive, ruthless, violent, fierce, and brutal warrior who is focused mainly on his own goals, and turning what guilt he has into anger. Whenever he is wronged, he becomes obsessed with revenge and will destroy who or whatever he has to so as to get his vengeance. At first, Kratos wanted revenge on Ares for the war god making him kill his family, then Zeus for trying to kill him, and finally, his vendetta extends to all the gods. He tends to blame others for his actions, such as Ares or Zeus, until the end, when Kratos accepted the consequences of what he'd done and killed himself with the Blade of Olympus. He has even contemplated killing himself at some points out of his inability to cope with the constant memories of his crimes. But for all his faults, Kratos truly loved his family, the only time he is happy being when he got to see Calliope again. He also cared about Deimos and his mother, Callisto, regretted killing Athena and came to care about Pandora, like she was his daughter. In the fourth game, Kratos sees the errors of his way after destroying Olympus and becomes a much wiser, stoic character who now raises his son Atreus and ensures that he will become a better god than either him or the corrupt gods that wronged him, and now only attacks in self-defense. He does not see the point in killing a weakened enemy and he is shown to be much more polite towards those who ally with him and displays enough increased sensitivity to know how not to make an enemy out of others. He even tries to be the voice of reason when Atreus finds out he is a god and lets it go to his head. Though he finds Brok and Sindri annoying, Kratos is never rude or ill-natured around them and even trusts them to work on his gear. In addition, while he admitted that he doesn't like it when Sindri talks about his brother, he was nevertheless absolutely disapproving and reprimanding of Atreus when he coldly told Sindri to shut up about it, even going as far as to look almost apologetic to the Dwarf. He was also clearly not amused when Atreus asked Sindri on why Brok is blue-colored while he isn't. He was even more merciful enough to be willing to spare a weakened Modi and was greatly shocked and angered when Atreus killed him in retribution for the latter's insults towards Faye. Likewise, for Baldur, Kratos offered him multiple chances to step aside and only fought him when threatened. He ultimately offered Baldur a chance to escape when he was defeated and even tried reasoning with him, saying that vengeance is not a path to be walked by as people would not find peace, recounting his own experience with it. He was voiced by Terrence C. Carson (who also voiced Mace Windu in many Star Wars video games), was voiced as child in GOW: Ghost of Sparta by Antony Del Rio, and is currently being voiced by Christopher Judge (who also famously played Teal'c in the Stargate serias) of 2018s God of War (IV) and God of War: Ragnarok. ---- To Vote for next month's Hero For Headline, go to Heroes Wiki:HFH

If you see this, your JavaScript might be disabled or DiscordIntegrator plugin isn't working. If the latter, please contact a wiki administrator.

Before contributing, please read our rules and abide by them. NO REAL WORLD EXAMPLES - in order to keep our wiki as neutral as possible we will no longer be allowing the creation of "Real World" articles, unlike fiction the real-world is rarely black and white in terms of morality and one man's "hero" can be another man's "villain" (no matter how noble they may appear). As such we have decided to stop the practice of adding real-world articles to this wiki and are now catering exclusively to fiction, folklore and theological figures. NO FAN-FICTION - We do not allow fan-fiction on this wiki. Original content is to be kept on your user page. Only notable "fiction" (NOT OF ONES OWN MAKING) is allowed. If something is not found on KnowYourMeme.com or does not have videos on Youtube not made by the original author then it will be deleted on sight. You can create this kind of stuff on the Heroes Fanon Wiki. Plagiarism - Any article added to this wiki must be of your own making. Articles found to be taken from other sites without permission will be deleted without warning. 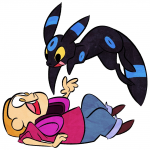