Hestia (ヘスティア) is a Goddess and head of the Hestia Familia, the love interest of Bell Cranel, and the deuteragonist in Is It Wrong To Try to Pick Up Girls in a Dungeon?.

She is voiced in Japanese by Minase Inori who also voices Nagisa Aizawa and in English by Luci Christian.

Hestia is a beautiful, petite Goddess with a youthful appearance. She has blue eyes and black hair tied into two twin tails which reach down to her mid thighs. Her hair is tied with hair accessories that feature blue and white petals along with bell shaped ornaments. She has a small frame (4' 7"), which further emphasizes her breasts, hence the nickname "Loli Big-boobs". Her usual attire is a white mini dress with a blue ribbon around her neck and one tied under her breasts around her arms, and a pair of white gloves. She is usually barefoot, but occasionally wears a pair of white flip-flops.

Hestia is an energetic and kind Goddess. She also dreams of being in a relationship with Bell and sees Ais and the other girls as her love rivals. Despite this, she does acknowledge the children of the lower world. Hestia is also a hard worker, working two jobs just to pay off her debt for the Hestia Knife. However, she also has somewhat of a lazy side as she stayed with Hephaestus until she was forced out and later took a while to find work. 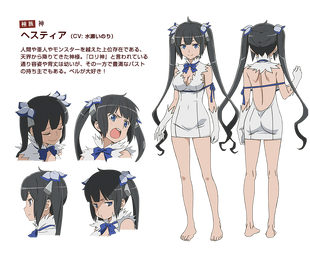 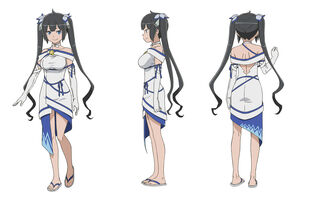 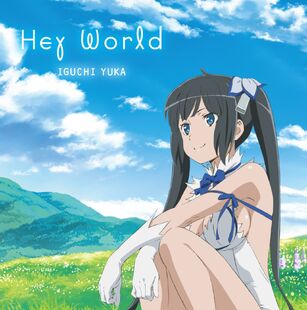 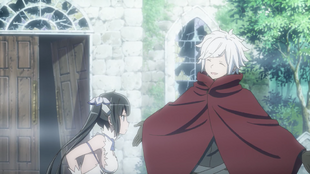 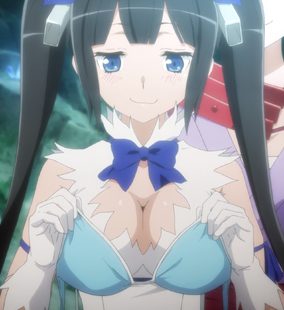 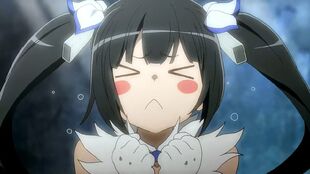 Add a photo to this gallery
Retrieved from "https://hero.fandom.com/wiki/Hestia_(DanMachi)?oldid=1904764"
Community content is available under CC-BY-SA unless otherwise noted.