Goddess of the hearth

Goddess of household
Goddess of sacrificial fire
Housekeeper of Olympus

Hestia is the goddess of hearth and home of ancient Greek mythology. She is the eldest of the Olympian gods and one of the few Olympians never to indulge in petty or selfish behavior. Worship of Hestia was required in every single temple of ancient Greece for she was beloved by all her family and no god or goddess would acknowledge prayers or offerings at their temples unless praise was given to Hestia first. In addition to having a shrine in every major temple Hestia had a main temple in every town throughout Greece tended to by the Vestal Virgins, her devotees. Though hedonism was extremely common in Ancient Greece, they also valued virtue and purity and so Hestia was highly venerated.

In Hercules: The Animated Series, she was voiced by the late Betty White.

Hestia was the first child born to he Titans Kronos and Rhea. Her father Kronos, had heard it prophesied that one of his children would overthrow him as he had done to his father and so to make sure the prophesy never came true Kronos ate his children as Rhea gave birth to them. Hestia was the first of her siblings to be swallowed whole by their father, over time Rhea became pregnant again and again and each baby met the same fate as Hestia. Finally Rhea was able to save one of her children, the youngest one Zeus, by replacing young Zeus with a rock in swaddling. Zeus would be raised in secret by his grandmother Gaea until he was old enough to take his vengeance on Kronos. When Zeus was old enough to depose his father, he returned and confronted him. Zeus freed his siblings from Kronos's stomach (some accounts say by cutting it open, others say by poisoning him until he vomited them up); whichever the case was, Hestia was the last of Zeus's siblings to be freed. Once freed, Hestia joined Zeus with her fellow siblings in defeating Kronos, after the initial defeat Kronos called the Titans to his aid and so the battle for dominance began with the Gods versus the Titans. Details about each god and goddess's role in the Titanomachy are sketchy and not all together a solid story but Hestia, Poseidon, Hades, Demeter, Hera and Zeus all fought as one against the much stronger individual Titans and eventually won.

Goddess of the Hearth

Hestia's aid in the great battle against the Titans was both the first and last time she would ever resort to violence. Hestia took a vow of virginity shortly after the battle and Zeus was so impressed by Hestia's responsibility and will-power at the prospect of eternal virginity that he gave her the duty of watching over Olympus. Zeus gave his siblings their own realms to rule, Poseidon god of the sea was given the vast oceans to rule, Hades god of wealth received the Underworld, Demeter goddess of flora was given the wilderness and Zeus took his youngest sister Hera goddess of marriage as his wife, to rule over the heavens and earth with him. Hestia had no real authority nor desired any and continued to simply maintain Olympus as Zeus's headquarters. Zeus established twelve positions of power by his side as vassals on Olympus, Hades was the only one not to take up one of the twelve seats, Poseidon accepted patronage as one of the Twelve Olympians subject to Zeus but still maintained control over the oceans as his own power (this would cause many conflicts between him and Zeus) unlike their brothers though Hestia and her sisters submitted as vassals to Zeus though without condition.

Zeus had many children and they all filled in positions of power one by one as the Twelve Olympians. Zeus eventually sired the god of wine, Dionysus; Dionysus had been orphaned on earth when his mortal mother gazed upon Zeus's true form and burst into flames and he was raised by nymphs until he was old enough to reveal himself to his father to claim his heritage. Dionysus marched to Olympus with his troop of nymphs behind him and arrived in a burst of music and gaiety. Zeus welcomed Dionysus to Olympus but Hera, who was not fond of her illegitimately conceived step-son, pointed out that the Twelve Thrones of Olympus had been filled and there was nothing left for Dionysus to claim. The music died down and Dionysus became dismayed as Zeus confirmed that he could not just add a new position of power just because Dionysus had arrived. Much to everyone's surprise without warning Hestia silently left her throne and presented it to Dionysus. Dionysus gladly took the seat of power and though Hestia had given up her position as major deity, held hand in hand with Zeus, she was from that point on admired by all her siblings and their children for her selflessness.

Hestia never left the halls of Olympus and far as she was concerned she never needed to, instead  she spent her days cleaning, cooking and maintaining security for the home of the gods. At the center of the halls of Olympus was a great hearth called the Flames of Olympus, the Flames were a symbol of security and purity granting heat, light and cooking. Because fire was valuable at the beginning of societies and the temples of Hestia all maintained 24/7 lit hearths Hestia became considered one of the most important and sacred gods in every City-State. As time passed improved architecture and learning lead to having fire becoming less important however the elder values of society had ingrained reverence for the Hestia's priestess and the fires they kept burning in Hestia's honor.

It was said that Hestia had the power to create flames so hot that the Titan's themselves, who were elemental embodiments, burned, melted and crumbled before Hestia's power. The precise limitations and details of Hestia's powers are unknown, however she was considered on par with Zeus and the rest of her siblings and was venerated as the oldest of the gods so she may well have had the most raw power of all her siblings. Because of Hestia's choice to never employ her abilities for violence after the Titanomachy her powers can never be accurately gauged against those of her more famous siblings. Hestia focused her powers on controlling and taming fire rather than using it as a weapon, she used it to warm Olympus and all homes that had hearths, every lit fireplace or stove was said to be a small piece of her power. Hestia had a variety of skills the ancient Greeks considered appropriate to women such as cooking and cleaning, these skills were what came to define the stereotypical skills of women. Odd enough though Hestia was a symbol of a raw power like fire she was seen as a healer where her flames would heal the sick or weak, this is likely based on the early discovery that fire could be used to cauterize wounds and stop infections so Hestia was given a position as the medic of Olympus.

Hestia cooked Ambrosia the food of the gods which was so miraculous a mere bite was said to be able to bring the dead back to life or make a mortal temporally immortal. To drink, Hestia brewed the gods Nectar, a drink sweeter than honey and more refreshing than spring water, it was said that if any mortal took taste of Nectar they were instantly refreshed, invigorated and became mystically adept. Zeus gave Hestia the keys to Olympus, whether these keys were literal or not is subject to debate but what this meant was that the gates, doors windows and very walls of Olympus were at Hestia's command even above Zeus. More miraculous than any of her other abilities or all of her fellow gods put together was Hestia's charisma. Hestia was empathetic to all her siblings and their children, she consoled, healed, cheered, advised and supported every single god and goddess in the Greek pantheon and is the only god to get along with every other god. For example Ares and Athena fought like cat and dog all day everyday, the one thing they had in common, other than Zeus as a father, was their love for their aunt Hestia.

Ambrosia/Nectar: Hestia cooked the food of the gods that granted and renewed immortality and divine power.

Divine Healing: Hestia could instantly mend and purify wounds even those inflicted by other gods. Hestia tended to injured gods that were wounded in scuffles with each-other.

Pyrokinesis: Hestia had omnipotent control of all fire everywhere. In the Titanomchy she could create flames so hot the Titans themselves were burned.

Sanctuary: Hestia's influence protected any mortal that entered one of her temples from the wrath of the gods, and none of the gods could fight in her presence on Olympus.

Star Control: Hestia was the one who hung constellations in the sky for Zeus by moving the stars.

Teleportation: Hestia could call back any Olympian on earth to the halls of Olympus. This was usually done when the god in question was either lost or too weak to make the journey themselves.

Hestia was a complete pacifist and because she stayed at home all day and simply maintained house-work she was not involved in many myths or adventures like the others gods. Hestia was mainly used as a paragon of what a Greek woman should strive to be, kind, quiet and supportive of her family. Hestia's reserved and demure demeanor may have allowed her to get overshadowed by her more wild and adventurous relatives but it is also what bequeathed her their unconditional love. The gods' love of Hestia was how the ancient Greeks provided leverage for showing her reverence. Because Hestia was completely non-violent her-self one didn't have to worry about angering her by disrespecting her, what one had to worry about was angering all the other gods at once by disrespecting her. 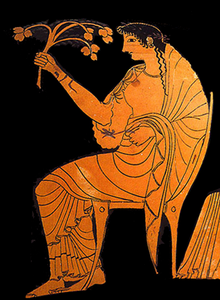 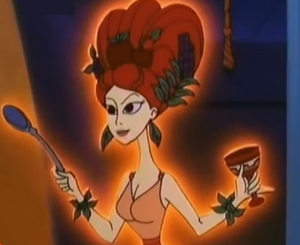