Get back his maracas and the 900 Korok Seeds while expanding Link's inventory.

Save Hyrule from the Great Calamity.

Hestu is a supporting character in The Legend of Zelda: Breath of the Wild. He is the resident of Korok Forest and the only Korok who is taller than the usually smaller Koroks and is even taller than Link. He has a strong passion for music and dancing when it suits him. He can be absent-minded at times, which results in him having a habit of getting lost and often a target of the Koroks’ pranks. He returns in Hyrule Warriors: Age of Calamity.

Link's first encounter with a Korok has the latter thinking he was Hestu, whom he had been waiting for to return the Korok Seed and gives it to Link in case he found him.

Link later meets Hestu, who was missing his maracas, and he admits that no one has ever saw him in one hundred years and then asks him for help in finding his special possession. Even after Link returns them, they are completely devoid of Korok Seeds and decides to increase Link's weapon inventory in exchange for any sufficient Korok Seeds that he finds from the Koroks across Hyrule. He travels to many different places and often attempts to recall the directions that the Great Deku Tree gave him. After upgrading Link's inventory a couple more times, Hestu realizes that he needs to return home.

He is later surprised to learn that he had been subjected to the pranks of the Koroks. He is able to return home and remains there for the rest of the game, but continues to expand Link's inventory in return for the seeds he finds. If Link finds all 900 Korok Seeds, Hestu bestows Link with Hestu's Gift, which is an achievement for 100% percentage for finding all of his seeds.

Link, Princess Zelda, and the four Champions walk through Korok Forest after Revali takes out the dangerous monsters that surround it with Divine Beast Vah Medoh. Hestu moves around them in an effort to get their attention, but even with some of them looking in his direction, they don't acknowledge his presence until Princess Zelda notices him. Hestu offers to escort them to the Great Deku Tree since the latter knows of the sword that seals the darkness, but admits that he tends to forget the directions. It was there that Hestu decides to join the heroes in the battle against the monsters infesting his home and rid it of the Malice that is spreading through it, now confident he could fight it with the help of Zelda, Link, and the Champions. After an encounter with Astor, Link is able to acquire the Master Sword and uses it to save Zelda from the former's Hollow copies of the Champions. Hestu is unlocked as a playable fighter. He is later seen among the united coalition of Hyrule's various races as they prepare to take back Hyrule Castle from Calamity Ganon under Zelda's command, shaking his maracas in victory as the troops let out their war cry. 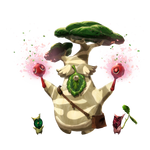 Hestu gets sassed at by Revali.