Scooby-Doo and the Witch's Ghost

The Hex Girls are a fictional female eco-goth rock band who appear in the long-running American animated series, Scooby-Doo. They first appeared on the direct-to-DVD movie Scooby-Doo and the Witch's Ghost in 1999. After that, they appeared in Scooby-Doo and the Legend of the Vampire in 2003, and made a guest appearance on the What's New Scooby-Doo? series episode "The Vampire Strikes Back". In 2010, they appeared (redesigned) in the Scooby-Doo! Mystery Incorporated episode "In Fear of the Phantom" and "Dance of the Undead", after being on hiatus for 7 years.

Thorn - lead singer and guitarist. She is sultry and her voice seems to seduce audiences. Her real name is Sally McKnight. She is quite shy when not on stage, and claims that she is "1/16 Wiccan on [her] mother's side" (although Wicca is a religion, not a hereditary biological condition). She has long black hair with red highlights, teal (sometimes green) eyes, and wears a black and red dress in The Witch's Ghost, but a red and purple dress in The Legend of the Vampire. Her guitar shares several characteristics of models made by Dean Guitars (the "V" headstock) and B.C. Rich (the eccentric body style, in this case the outline of a bat). She is shown to take a liking to the gang's Great Dane, Scooby Doo due to her looking at him cutley when he looked scared when showing him her fake vampire teeth and when Velma is offering him Scooby Snacks. In Scooby Doo Mystery Incorporated she still has her signature black hair with red highlights. Her eyes are green (The only hex girl in Mystery Incorporated with colored eyes) She now wears a black dress with a red belt, a shirt with white puffy sleves underneath. Also red socks that come up to her shins and black strapped shoes.

Dusk - drummer and back-up singer. Of the three girls, Dusk reveals herself to be the fiercest, as well as the most rebellious of the band, and does not like to speak much about herself, and compared to Thorn and Luna, Dusk does not speak much in general. She also tends to show that she is tough, but on rare occasions she displays strong feelings of love and friendship towards her friends (especially the gang's Great Dane, Scooby-Doo, as shown when she kisses him on the cheek). She was smiling after Scooby was licking her face. She has blonde hair (usually in pigtails) and wears a dark green dress. In the What's New, Scooby Doo episode "The Vampire Strikes Back," it was revealed she was leaving the Hex Girls to go solo (although this was probably just a rumor that was published in the magazine that Daphne was reading, because throughout the episode there are no more references to that subject). When she appears in Scooby Doo Mystery Incorporated her hair is in two thicker pigtails with red highlights. Her outfit consists of a red shredded top and leggings, black buckled boots and a black and white striped romper. Unlike Thorn, whose real name is Sally McKnight, Dusk’s real name is unknown.

Luna - keyboardist and back-up singer. Of the three, she is considered the calm, wisest one. It was her father, a dentist, who outfitted the band with their trademark fangs. Luna was fond of the gang's Great Dane, Scooby, when allowing him to try on her fang teeth. She appears to be of African descent, and has bright, dyed-red hair, black eyes and wears a purple dress. She is protective of her keyboard and prefers no one but herself touches it. Not much else is known about her. Her parents used to listen to glam rock albums. Her real name is unknown. When she appears in Scooby Doo Mystery Incorporated her hair is spikier, thinner and a light shade of pink. Her outfit consist of black pants, hoop earrings, a red and white shirt with puffy sleeves and red boots.

Crush - In Mystery Incorporated, Daphne had a brief spot on the band as "Crush" (although this was mostly to be bait for the Phantom). She sang the song she co-wrote with Thorn called "Trap of Love". 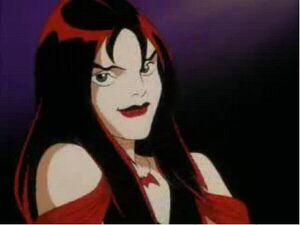 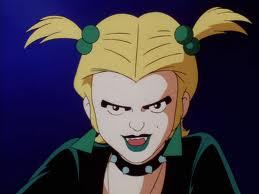 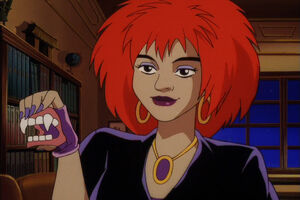 In Scooby-Doo and the Witch's Ghost, Thorn and the girls are first seen as suspects of the mystery that is going on in their hometown, Oakhaven. After seeing them perform, the gang decides to follow them and see if they have anything to do with the mystery they are trying to unveil. Fred and Daphne even suspect that they are real witches, after seeing Thorn performing a strange ritual. Later, it is revealed that what they saw was just a trick that Thorn had come up to sooth their vocals, and they even explain that they are actually Wiccans. They accompany the rest of the group in the search for Sarah Ravencroft's diary (which is actually a Witch's Spellbook), and later on, Thorn is the one who is able to trap her and Ben back in the book, by using it to cast a spell on them. To pay for the damage caused in the battle, the Hex Girls, along with Scooby and the gang perform for the town's folks. In the film they sing two songs called "I'm A Hex Girl" (written by Bodie Chandler and Glenn Leopold) and "Earth, Wind, Fire And Air".

In Scooby-Doo and the Legend of the Vampire, Scooby and the gang find out that Thorn, Luna and Dusk are to open the Vampire Rock Music Festival in Australia. When they are about to start to sing their act, the giant Yowie Yahoo and his three vampire minions capture them, and it is up to the Scooby gang to find them. It is later revealed that they had been offered by the Wildwind a Great Barrier Reef Scuba Diving tour if they quit from the festival, to which they refused, so the members of the Wildwind group let them to get out of that mess on their own. They eventually are able to come back to the place where the festival is being held, just in time to see the Mystery inc. solve the mystery. They also join Scooby and the gang in their performance in the end of the movie. In this film they sing 2 songs: "I'm a Hex Girl" and "We do Voodoo"

In "The Vampire Strikes Back", the girls are in the Fortescu Castle in Transylvania, trying to shoot a videoclip on their latest success, when a vampire attacks them. The attack scares Dusk and she tries to convince the others to get out of there before they end up dead, but Thorn and Luna want to stay and try to shoot the videoclip. This creates an atmosphere of instability among the group. When Scooby and the Mystery Inc. arrive at the castle, they need to solve the mystery, while trying to prevent the girls from breaking up. In the end, Thorn, Dusk and Luna are able to wrap up the shooting, while enjoying the company of Scooby and the gang.

In the episode "In Fear of the Phantom", their appearances have been altered. These alterations range from minor to radical. Thorn is the least changed with her hair retaining its classic, red and black style. However, her outfit now incorporates white and has a shorter skirt. Luna's outfit is a flowing gown with more of a Victorian influence, and she is darker in skin tone. Her hair is longer, slightly spikier and now white instead of orange. Dusk's appearance is by far the most changed. Her pig-tails are bigger, have red highlights and are adorned with goggles. Her whole outfit has been completely redesigned with a punk rock feel which is mostly red with some black and white stripes. In this continuity, when the gang meets the girls, they are already world famous. Velma, herself, is one of their biggest fans. During a concert in Crystal Cove, the girls are attacked, and Thorn is almost seriously injured. Daphne gets captured while acting as a stand-in for Thorn. However, she is soon rediscovered, angry after overhearing that Fred wished he "didn't care about her". Afterward, she temporarily joins the band under the name "Crush". To help Daphne get over Fred, Thorn co-writes "Trap of Love". After performing said song, the Phantom attempts to abduct Crush but instead takes a dummy , triggering Fred's trap. The Phantom turns out to be the Hex Girls' songwriter, Daniel Prezette, formally known as "Fantzee Pantz". He harbored jealousy of the Hex Girls' success and anger over being replaced by them - vowing revenge. With Prezette in jail and there being no more need for Daphne, she unceremoniously retires from the band.

The Hex Girls reprise "Hex Girl" and "Earth, Wind, Fire, and Air", though the latter was sung by Daphne posing as Thorn (meaning that it was Grey DeLisle singing lead vocals instead of Jennifer Hale).