Hexadecimal, the self-proclaimed "Queen of Chaos", is a virus operating out of Lost Angles. She is Megabyte's sister, serving as the chaos to his order. Her origin is revealed in the fourth season.

She is voiced by Shirley Millner.

Hexadecimal is a benign virus and Megabyte's sister who lives in the ruins of Mainframe's former twin city, now known as Lost Angles.

Essentially chaos incarnate, using the title of The Queen Of Chaos, with unpredictable mood swings and a flair for art and drama. Starts out rather villainous, but mellows out under Bob's influence, and in fact joins the heroes as a Sixth Ranger during season 4. 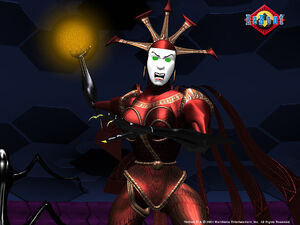 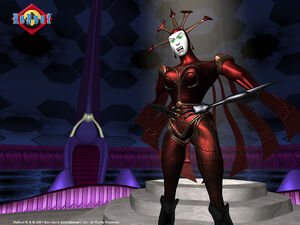 Add a photo to this gallery
Retrieved from "https://hero.fandom.com/wiki/Hexadecimal?oldid=1957505"
Community content is available under CC-BY-SA unless otherwise noted.