Hanging out in the Loser Lounge (formerly).

Help Gene through his journey and prevent him from being deleted by Smiler (succeeded).

Hi-5 is the deuteragonist of the critically panned 2017 animated movie The Emoji Movie.

He is a high-fived (✋🏻) emoji (hence his name) and is one of the misfits emojis who lived in the Loser Lounges, where no emojis can't fit anymore. He travels with Gene to help him make him a real meh.

He was voiced by James Corden who also voiced Biggie from Trolls.

Hi-5 is an orange hand with his face on the palm. From the position of the fingers, he is a right hand. His thumb and pinky function as his arms, with the former being left and the latter being right. He also dons a blue bandage on his pointer, resembling a bandana worn on the head. Like most other emojis, he has two thin legs with toeless feet.

Hi-5 seems to be carefree and outgoing throughout most of the film, most especially when with Gene and Jailbreak.

At the first few moments, he was arrogant, desiring to become one of Alex's favorite emojis again after he was dumped by the latter. But, once he met Gene, his ways change, even deciding that having a friend is more important than being a favorite, indicating that he gave up on what he wanted in the first place. 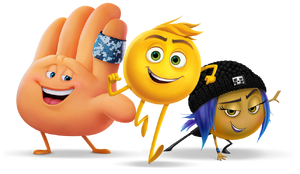 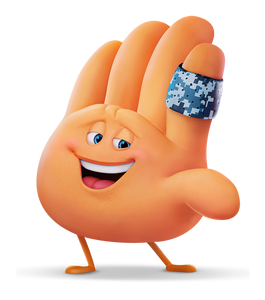 Retrieved from "https://hero.fandom.com/wiki/Hi-5?oldid=1902863"
Community content is available under CC-BY-SA unless otherwise noted.