An evil team always has a bad member, a least jaded player, a white sheep. Hi-Test is that weakest link. Among Soundwave's group of Mini-Con subordinates, Hi-Test doesn't succeed as the others do. It's not that he's dumb, it's just he lacks the heart for skullduggery his teammates have. Sadly for him, Soundwave is not having it. Sometimes, he works with a much better boss who understands his caring heart: Optimus Prime.

Hi-Test was one of a group of Mini-Cons captured and reprogrammed against their will by a group of Decepticons led by Cyclonus (who then wiped all memory of themselves from the Mini-Cons data banks) to assist Soundwave in gathering weapons to escape the Shadowzone. Hi-Test surreptitiously observed Strongarm and Nightra patrolling a forest road. He attempted to steal Strongarm's Decepticon Hunter only to disturb some birds, prompting Nightra to run and Strongarm to follow. Hi-Test later opened a GroundBridge portal to report back to Soundwave, who berated him for his failure. Frightened, Hi-Test fled, with Soundwave threatening to offline him at the first opportunity.

Hi-Test took to following Bumblebee's team for a while afterwards. He finally revealed himself after knocking Laserbeak away during an fight with Optimus Prime before linking himself up with Optimus to upgrade him. With the additional power provided, Optimus successfully defeated Laserbeak and destroyed Soundwave's beacon generator. After explaining himself through Optimus, he was encouraged to make the Shadowzone his home as no one would hunt him there, disappearing through another GroundBridge portal. 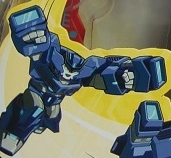 Hi-Test thanks Optimus Prime, Bumblebee, and other Autobots for freeing him from Soundwave's oppressive rule after helping them defeat the faceless Decepticon.

Retrieved from "https://hero.fandom.com/wiki/Hi-Test?oldid=1600800"
Community content is available under CC-BY-SA unless otherwise noted.