Hibiki Kohaku is a character in Chronophantasma who appears mainly in Kagura Mutsuki's story scenarios, providing support and back-up for him from a nearby distance. He is a playable character in Central Fiction.

Servant of the Mutsuki Family and captain of the Novus Orbis Librarium.

As the servant of one of the Duodecim families, he is well acquainted with their members, such as Jin Kisaragi.

The Kohaku family is one of the Mutsuki branch families. They are trained for silent assassinations and so are rarely mentioned in historical books. As a member of this family, Hibiki was also trained in the assassination and stealth arts, proving it multiple times by appearing undetected behind backs of characters like Jin or Tager.

Hibiki is described as "a pretty boy with a poison tongue". His attitude towards the normally laid-back Kagura is often critical, being quick to belittle or insult him. However, in reality, this covers up his actual admiration for the Black Knight. He also has a strict personality, such as making Kagura pay for the damages he caused in the Headquarters when he fought against Arakune, and making Kagura pay the electricity bill through his personal bank account for when Kokonoe used 80% of the headquarter's electric power output to repair Iron Tager. He is also known to be an excellent cook, where even Rachel Alucard had highly praised his cooking.

One of his mottoes is: "A man with confidence shall not lose; only doubt will bring defeat".

Hibiki is a teenage male of Asian descent with small, delicate, and feminine features, earning him the moniker of "Pretty Boy". He has black hair in a styled bowl cut that reaches his cheekbones, and he stands only a few inches shorter than Kagura. He wears a standard NOL uniform, with a tight-fitting jacket. The uniform consists of a small red tie over the standard blue jacket with yellow rims and black shoulder pads, accompanied by white gloves.

In Central Fiction, he wears a different outfit which consists of a standard "jolting sapphire"-colored poncho-like jacket with an underneath military collar shirt, black leggings, and blue military boots.

As a captain of the NOL, it can be assumed that Hibiki is efficient in fighting.

He is extremely capable of moving without being detected, managing to move behind Jin's back without being noticed until he was too close. His abilities are recognized by Jin, complimenting him on his stealth; Jin also mentioned an unknown ability possessed by Hibiki, which is implied to put him at Jin's pace and level.

Hibiki's Drive is Double Chase, which allows him to make a duplicate of himself and teleport to his duplicate's current position. His Overdrive, Schwarz Reis, accelerates his Drive. His fighting style focuses on agile ninja-like movements and clean-cutting motions with his swords.

An interesting thing to note about his weapon is that their hilts/grips have detachable, expendable and reload-able blades. With this in mind, said blades are also used as skillfully-thrown projectiles. 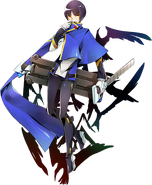 Retrieved from "https://hero.fandom.com/wiki/Hibiki_Kohaku?oldid=1694784"
Community content is available under CC-BY-SA unless otherwise noted.