Honorable Warrior
Hideyoshi Toyotomi (Japanese: 豊臣 秀吉) is a character in the Samurai Warriors series. He is the most famous peasant-samurai in Japan and Nene's husband.

Hideyoshi often appears in Nobunaga as a special force, responsible for implementing various strategies of the Nobunaga himself. This included scouting at Okehazama, responsible for all planning and construction of Inabayama Castle, and responsible for the fire attack at Ise-Nagashima and the strengthening of Nobunaga in various other scenarios. Some scenes include his army who ruled his own after the death of his master, confronted Mitsuhide Akechi in Yamazaki, executed Goemon Ishikawa in the capital and participated in the Sanada episode, causing Hanzō Hattori to go to Ōsaka to complete him. He even played a guest appearance in the lower path of Masamune Date because Masamune extended a cross to him.

For his story of expansion, Hideyoshi began as a simple general under Nobunaga, first as a vassal in Inabayama Castle. Providing a plan for Nobunaga, he was ridiculed by other Oda vassals and ridiculed by Oichi, but Nobunaga allowed him to build a castle in Sunomata and signal when Mino Trio raged inside the castle. Once Mino is under the rule of Nobunaga under the defeat of Yobitaga, the Oda army will continue to conquer Echizen. At the moment he faced the victory of Asakura, Azai suddenly betrayed Nobunaga and forced the invaders to retreat. When their lords fled, Hideyoshi volunteered to prepare for the defender. When Magoichi asked him why, Hideyoshi admitted that he hoped to be promoted under Nobunaga so that he could one day do something great for the people.

He asked Magoichi to help him achieve his vision and the mercenary agreed. After they defeated the forces of Nagamasa and Yoshikage together, they safely retreated back to the capital together. Years later, Nobunaga decided to smash the Red Anji thugs and the Seca traitors and headed to Sakai, where Magoichi waited for them. Hideyoshi wants to see the land of peace that his master wants, but not at the expense of the lives of so many people. When the mercenary tried to attack the Nobunaga, Hideyoshi was given the task of stopping him. Hideyoshi fails, Nobunaga will be shot and chaos spread throughout the battlefield. Then it became a hunt for Magoichi's head and a complete elimination of each rebel. After the battle, Hideyoshi met his beating friend and told him that he was giving up his original dream.

Several of his allies began to notice that he began to be like a letterhead. Even with his threatening partings, the sniper refused to give up Hideyoshi and tried to stop him from becoming a tyrant. After Honnōji killed Mitsuhide, Hideyoshi immediately resumed the attack on Mōri. With ambition, he suddenly got along with them peacefully and quickly returned to Azuchi Castle to kill Nobunaga. Killing Magoichi, many Oda officers and Nobunaga mark the end of his dream of universal happiness. Hideyoshi stopped attacking at Sakai, he insisted on letting his friends surrender to prevent the Holocaust. After his failure, Magoichi gave up Hideyoshi's wish and joined his friend's side again. When Nobunaga was killed in the Instinct Temple, Hideyoshi hurriedly intercepted Mitsuhide's army in Yamazaki.

His troops appeared before the arrival of Mitsuhide, so they used time to defeat Toshimitsu Saitō and declared Mount Tenno. Avenging his lord, Hideyoshi unified the land and became the supreme ruler. However, Ieyasu despises him and rebels at Komaki-Nagakute. With the help of Magoichi and Keiji, Hideyoshi defeated his opponent. He asked Ieyasu to surrender and the land was calm. 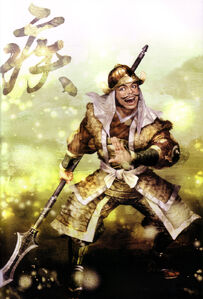 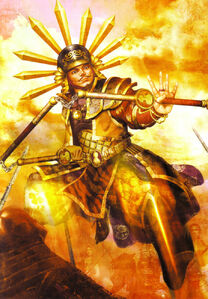 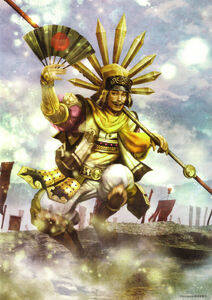 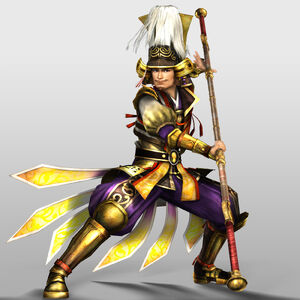 Hideyoshi in Samurai Warriors 4.
Add a photo to this gallery

Retrieved from "https://hero.fandom.com/wiki/Hideyoshi_Toyotomi_(Koei)?oldid=1750316"
Community content is available under CC-BY-SA unless otherwise noted.