Highfather, real name Izaya, and sometimes known as Izaya the Inheritor, is the benevolent ruler of New Genesis, the father of Mister Miracle and adoptive father of Orion and hero in the New Gods comics and later DC.

Darkseid used Izaya in a plot to seize control of Apokolips. During a raid by his uncle Steppenwolf, Darkseid murdered both Izaya and his wife. Darkseid only stunned Izaya since he will seek revenge on Steppenwolf which will make Darkseid rise to power. In order to make Apokolips and New Genesis be at peace, Izaya and Darkseid exchanged their infant sons. Darkseid raised Scott Free while Izaya raised Orion. Izaya managed to make Orion (who was a savage back then) become well behaved and made him one of the most finest warriors of New Genesis. Scott Free (Mister Miracle) escaped Apokolips which broke the trade agreement between the two planets and it was planned by Darkseid.

During the Genesis limited series, Highfather was killed in battle with Ares, the god of war. A hero from Earth named Takion took over New Genesis as a ruler and is a living conduit of the Source. Izaya's spirit served as a member of the Quintessence, a council of powerful cosmic entities that observe anything that occurs in the universe. High Father appeared in Seven Soldiers: Mister Miracle as the leader of the New Genesis survivors living on Earth as homeless people since their world got destroyed. The events of that miniseries is a vision of possible events leaving High Father and the people of New Genesis' faith unknown. However, he was shown in Final Crisis sketchbook, indicating that he will return. In Final Crisis #7, Highfather was next to the heroes Barda and Mister Miracle in front of the recreated planet of New Genesis.

High Father appeared in the Superman: The Animated Series episode "Legacy Part II" and made a cameo in "Legacy". The High Father made the planet Earth under his protection after Darkseid tried to take it over while searching for the Anti-Life Equation. He also appeared in the Justice League episode "Twilight".

The High Father was referenced in Smallville as someone who raised Orion and obsessed with spreading the light.

Highfather in Superman: The Animated Series. 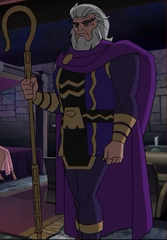 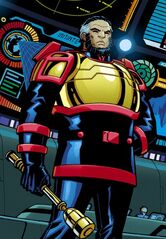 Highfather.
Add a photo to this gallery

Retrieved from "https://hero.fandom.com/wiki/Highfather?oldid=2100004"
Community content is available under CC-BY-SA unless otherwise noted.