Playing with her dog Hikari

Hikaru Shidou is a fictional character from the anime/manga series Magic Knight Rayearth created by Clamp. She is one of the three protagonist of the series and represents the element of Fire.

Hikaru usually wears her school uniform, which consists of a red long sleeve blouse, a collar and a white ribbon with a black skirt with a line of red at the bottom and white petticoat. After she is summoned to Cephiro, she wears white armor with rubies adorned in it. After her armor reachs the last stage, she wears a very short red, white, and gold armor-like dress with a red cape and matching tiara-like headpiece. Hikaru is very short, with light red braided hair and fiery red eyes.

A pure, honest and a simple girl. Although she is vertically challenged, she can jump very well. She is good at using swords because of her training with Kendo when she was still young. Hikaru is very short that's why she is often mistaken as an elementary student instead of being a junior high school girl she really is. Inspite of her simplicity and innocence, she is the bravest, strongest, and most mature among the other magic knights. Her first weapon was a sword and soons upgrades to a sword of Escudo that turns to flames if someone other than herself touches it. Her magical element is Fire.

Hikaru Shidou is the Magic Knight of Fire. She is 14 years old and is currently on 8th Grade. Hikaru has a long red hair that matches her red eyes. As seen on the anime series, she usually puts her hair into braids. She is also the youngest daughter of her family, who runs a kendo dojo. She has three older adoring brothers; Satoru, Masaru, and Kakeru, thus explaining her tomboyish personality. Neither the manga or anime version mentions any reference to her parents beyond that they exist. However, one of the manga omakes mentions that her father left on a training journey when she was five because she had beaten him in a kendo match.

Hikaru posesses the strongest heart of the Magic Knights summoned by princess Emeraude to save Cephiro. She is often the one encouraging the other Magic Knights to look at the bright sides. Her best friends and fellow Knights are Umi Ryuuzaki and Fuu Hououji. She is headstrong, determined, and somewhat childish, regularly doted upon by other characters both in the manga and the anime version. Hikaru is very enthusiastic, thus she is the first one to accept her duties as a Magic Knight. She is more emotional in the anime, she blames herself for the death of Princess Emeraude and the guilt starts to eat at her conscience. Hikaru is very innocent and loves everyone equally. This is proven when Lantis asked her about love confessions on Earth in the manga and she said she wanted to marry both him and Eagle; Vision of Autozam. Her relationships with them differ in the anime.

Hikaru has a somewhat uncanny ability to understand animal language, and Cephiro's fauna. She has a strong friendship with Mokona, and Clef's pet Fyula.

The character Nova, is a part of Hikaru's soul and becomes a crucial part of the second half of the story in the anime. Nova appears to be her reflection and somehow, they happen to look exactly the same except for Nova's long elven-like ears and Pinkish, undbraided hair.

Powers and Abilities Hikaru specializes in Fire magic. Her spells include: 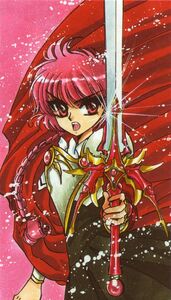 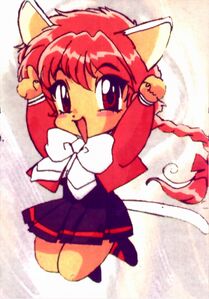 Neko Hikaru
Add a photo to this gallery

Retrieved from "https://hero.fandom.com/wiki/Hikaru_Shidou?oldid=1671929"
Community content is available under CC-BY-SA unless otherwise noted.