To defeat Team Plasma and become the champion (succeeded).

Hilda (Japanese: トウコ Tōko), also known as White, is the female player character in Pokémon Black and White. Her male counterpart is Hilbert.

Hilda is a tall, slender girl with long dark brown hair and blue eyes. Her top hair is covered by her hat, this being why it's unknown what her hairstyle is. In the Adventures Manga, her counterpart, White, was shown without her hat once.

Hilda wears a white tank shirt that reaches her waist underneath a black waistcoat and a pair of denim shorts with white tear details on them. She also wears black wristbands with a small pink stripe on them with matching black ankle boots, pink laces and soles, and a pair of black socks underneath. Hilda also carries a pink messenger bag around.

Hilda is a young girl who lives in Nuvema Town, along with her childhood friends, Cheren and Bianca. She will receive a starter Pokémon and a Pokédex from Professor Juniper. Hilda sets off on her Pokémon journey to become the Champion. She meets a man named N along the way, who wishes to separate humans and Pokémon. In order to achieve his goals, he and Hilda battle several times during the course of the game. Hilda also battles Team Plasma at various stages of her journey. At the Pokémon League, her challenge is interrupted when N's Castle rises from the ground. After defeating N in a final battle, she battles and defeats Ghetsis, who is subsequently arrested afterward. Hilda then becomes the Champion.

If she is not chosen as the player, Hilda appears as the player's partner in the Battle Subway when choosing to ride the Multi-Train. Two of the following Pokémon are picked from the corresponding list, depending on what Hilbert, the player, wants her to base her team on. If the player chooses "A balance between the two," Hilda's Pokémon are chosen from either list.

In Pokémon Black 2 and White 2, Hilda went searching for N in a faraway region and did not come home yet. Her mother mistakes the player for her. 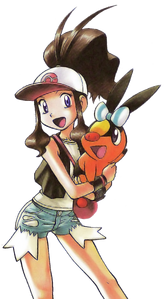