Take care of Johnny Garland and become a super-heroine

Hildegard Valentine, often simply called Hilda, is a heroine in the video game Shadow Hearts From the New World. Hilda is a vampire mage and sister to Keith and Joachim Valentine, heroes from previous installments of the series. Hilda's primary function in battle changes depending on her form, which alters based on what sort of blood type she feeds on. Along with her stats her personality changes from form to form but no matter what the form she is always both courageous if extremely air-headed.

Hilda is first encountered in the game Shadow Hearts: Covenant, appearing to challenge her brother Joachim, one of the game's main party members, for accidentally destroying the sword of their brother Keith, a main party member from the previous game Shadow Hearts. Hilda appears in a capacity similar that Joachim himself had appeared to fight Keith in Shadow Hearts, and like Joachim, Hilda appears only in bat form but eventually reveals her humanoid form in the next game. In Shadow Hearts: Covenant Hilda was simply called Pink Bat and came to fight Joachim to make him pay for shaming the family by breaking their sacred family blade which Keith had inherited. Joachim must beat Hilda in only a few turns or suffer a massive counter attack by Hilda which will kill him in a single turn. When Joachim beats her, Hilda flies off content that her brother was strong enough be excused from being physically disciplined but still left to report Joachim's location to Keith, who arrives later, if only to catch up with his friend Yuri.

Shadow Hearts: From the New World

In Shadow Hearts: From the New World Hilda is encountered along with Roger Bacon, a constant friend of Yuri, Joachim and Keith. Roger had been taking a flight in his experimental jet, the Bacon Jet, and using it to see see America, a trip which Hilda had expressed a desire to join to see the sights. Unfortunately Roger's jet suffered a critical malfunction and crashed in New-Mexico, furthermore the jet was mistaken for an alien space-craft by local officials. With the assumption that the Bacon Jet was a U.F.O. the U.S. military quarantined the area, confiscated the wreckage and imprisoned Roger and Hilda, believing the strange old creature and talking bat were aliens. Hilda, both out of frustrations with the situation and due several days' worth of hunger eventually sates her thirst by sucking Roger's blood which causes Roger to temporarily lose consciousness and Hilda to transform in to her Curvy form.

When the game's main protagonist Johnny Garland, follows-up on a tip that the villain Professor Gilbert had an alternative laboratory in Area 51 he finds Roger and Hilda in a cage during his infiltration of the base. Johnny and his friends agree to help get the two out, believing their story about not being aliens and certain the two meant no one any harm. In gratitude Hilda agrees to help Johnny and the others look for any sign of Gilbert and then help them escape the base. Johnny and his friends quickly find that Hilda is not a normal human being as she had both super-strength and was endear people with naught but a kind smile and sweet voice. Even with Hilda's help getting through the base eventually the group encounters a massive automation guarding their way out. The gigantic robot was intimidating, Hilda reveals that when she get's scared she gets hungry and that she had barely gotten any blood from Roger and what little there was tasted bitter, with Hilda certain Johnny would die by the automation's hands Hilda threw caution to the wind and decided she wanted to drink Johnny's blood before he died. Hilda quickly lounged at Johnny's neck to drain his blood. Even as Johnny objected and began to panic at being attacked by a vampire Hilda had transformed to her slim form. Hilda said that Johnny's blood was much sweet, sweet enough that she was able to revert to her normal form, in which she could use magic with ease then announced she would save Johnny and his friends from the fearsome creation.

With Hilda's help the team was able to defeat the robotic boss and escape the base. Though they had run into a dead-end looking for Gilbert they had found to valuable team-mates, Roger and Hilda. Roger needed to stay to work on repairing his jet but told them once it was fixed he would give them a ride to repay them, what Roger did not mention was he knew the answers to many of the questions Johnny was actually tracking Gilbert down to be answered but decided to reveal those to Johnny after his repairs were finished. Hilda was not content to stay with Roger while he repaired the machine and wanted to repay Johnny properly for saving her. Hilda fancied herself a super heroine and wanted to make a name for her self fighting evil similar to Frank Goldfinger and so she insisted on being able to accompany the party on their quest to get answers from the evil Gilbert. From that point on Hilda joins the team as a permanent party member.

In her Pink Bat form Hilda is extraordinarily fast and strong but somewhat weak health-wise and completely unable to use magic. In her Curvy form, Hilda is strong, if somewhat slower and able to take great amounts of damage without falling, she can cast magic in this form though it has less than impressive effects. In Hilda's Slim form she is reasonably fast and can use magic to extraordinary effects but her strength and health both drop considerably. Hilda alternates between her forms by drinking blood from foes, depending on whether the blood is positive or negative she either goes further into her Curvy transformation or further into her Slim transformation, with her Pink Bat form being the buffer zone between the two. If Hilda drinks enough of a certain blood type and goes deep into either form she can transform into a super version of that form becoming stronger, the super form is only temporary though and will fade in just a few battles after which she will shift to the other end of the next transformation cycle. Like Keith and Joachim, Hilda's Blood Suck ability not only harms her opponent but heals her, Keith has stated this is a not a natural vampire ability but in truth an arcane ritual passed down through the Valentine family. Hilda knows a hand-full of the family's Dark Rituals along with her Blood Suck, making her more competent in them than Joachim but still dwarfed by Keith's knowledge of the family rites.

As Hilda's forms switch so too does her temperament. In Hilda's Pink Bat form she becomes high-strung and easily angered. As Curvy Hilda she becomes sweet and demure. As Slim Hilda she is cocky and has a need self-adulation. No matter what form she has, Hilda is always a bit naive, if not outright dim-witted. Hilda likes to be considered a hero and is a fan of superhero comics. Super-Hero comics are not the only comics Hilda likes though and she enjoys reading gay-fiction. Finding gay-romance comic-books will elevate Hilda's mood, giving her powers a boost. Like her brother Joachim, Hilda tends to let her attention wander but still has an underlying need to play the part of a hero. Despite her similarities to Joachim, Hilda actually tries to be more like her brother Keith though by being dignified and stylish. Keith can be encountered late in the game, at the time weakened after a fight with Joachim. Hilda makes-up her mind to teach Joachim a lesson again for raising a hand to the family's heir and challenges Joachim at his own game. Beating Joachim will both teach him the meaning of humility and earn Hilda her ultimately weapon, a Key-Blade. 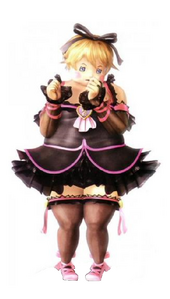 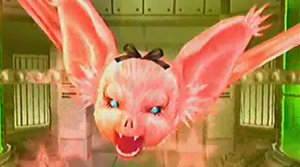 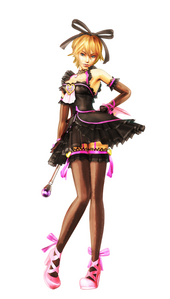