Keep Watanuki out of trouble i.e. from her unnatural bad luck

Scapegoat
Himawari Kunogi is a major character of the manga/anime series xxxHolic. She is a friend and schoolmate of Kimihiro Watanuki and Shizuka Doumeki and the object of Watanuki's affection.

She is voiced by Shizuka Itō in the Japanese version of the anime and Cherami Leigh in the English version.

Himawari appears as a beautiful young girl with a slender figure. She wears her uniform most of the time and is rarely seen with another clothing, except for kimonos. When she is not wearing her uniform, she usually chooses to wear one-piece dresses of a single color in its different shades. She has a long curly hair which ends under her waist tied in two pigtails since she was a child.

As the series progresses, Himawari continues to grow and develops a more shapely body and still uses the same choice for clothing. She changes her signature pigtails and instead let goes her hair to cover the scars on her back.

She always smiles and keeps a positive attitude to the point that when she watches Watanuki and Doumeki fighting, she thinks they are playing together. Later on the series, it´s revealed that she always keeps her smile even when she is saying something really disturbing to hide the fact that everyone who becomes her company or aquaintance ends in disaster. While she often demonstrates an innocent personality, she is more mature than Watanuki and understands his feelings about her since they met, and when Doumeki or Watanuki says something complicated, she clarifies it. 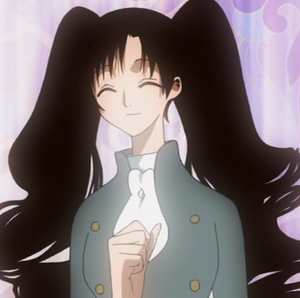