Insisting that her magic is real.

To escape from the Academy for Gifted Juveniles (succeeded).

Friend of a Villain

After she successfully participated in the 53rd Killing Game, Himiko's memories and past were fabricated by Team Danganronpa as follows:

Prior to being the bearer of the Ultimate Magician's title, Himiko was the self-proclaimed Ultimate Mage, as she constantly insisted that her parlor tricks were real magic. She also claims that she was the youngest person ever chosen by the world magic lovers' society, the Magic Castle, also known as the Hall of Magicians, as the Magician of the Year. However, she says she has been prevented from receiving her reward because of a conspiracy to hide the existence of magic.

While she isn't recognized as a mage, Himiko was awash in clients from all over the world who wanted to hire her as a magician.

According to Himiko, she also suffered from bullying in the past, most likely due to her different type of behavior and communication.

Himiko was an apprentice of a skilled magician whom she dubbed as her master, the one that she addressed as the Greatest Mage, in order words, the "Archmage." She was training under him until she even surpassed him as a talented magician, starting to receive an overwhelming number of fans. However, she realized that it was only her popularity that keeps increasing in number, not her master. This fact frustrated her as she stated that she would never surpass him as a magician.

Himiko has pale skin, reddish-brown eyes, and chin-length red hair. Her most notable trait is her black "witch hat", with a red strip around the middle of it, a small pin on the cloth. She also has a quite short stature and round face, giving her quite a young appearance. The right corners of her upper lips are slightly curled up, and her eyes are lazily lidded, reflecting how easily tired she gets.

She also wears brown medieval boots with white ribbons tied around her ankles, dark brown tights, and a pleated bubble red skirt. Around her shoulders is a black blazer with grey accents, with a grey blouse underneath a brown sweater vest. On the pocket of her blazer is an insignia of her previous high school, and gold buttons adorn her blazer.

Some of her hair is hidden underneath the witch hat she wears on her head. She also wears a hairpin on the right side of her bangs, which resembles a blue gem. The same similar gems appear as cufflinks on her sleeves.

In the prologue, Himiko wears a white sailor blouse with green lining and a red bow, a grey cardigan, a pleated blue skirt, white socks, and black loafers.

Regarding her talent, Himiko considers her parlor tricks to be real magic. This is why she prefers to be called a mage instead of a magician. However, she is only seen doing rather ordinary things like hand techniques and making doves appear. She gets annoyed if people tell her magic isn't real, causing her to repeat that it is over and over again. During various situations, she tends to claim that she could use her magic to fix the problem, but she says she doesn't have enough MP. She also tends to take the credit in multiple situations, claiming it all happened thanks to her magic. Fitting her mage theme, she also uses a very notable outdated way of speaking, though this is not included in the English version. While all of this can make her appear self-centered, she has actually explained that one of the biggest reasons why she likes being a "mage" is to make her audience happy and smile, especially children.

While she has a "to the max" side as a magician, Himiko also has a very lazy side and finds putting in the maximum effort to be too much trouble. She constantly calls things tiresome and appears disinterested in things other than magic, refusing to do several things because it's "such a pain". She also struggles to communicate her feelings to others, claiming that talking wears her out and generally appears to be spaced out. While she is occasionally anxious to the point of severe trembling and stuttering, there are also moments when she just appears mildly annoyed during horrible situations and doesn't seem to fully realize what is happening. She is also notably childish, taking pride in things like brushing her teeth or going to the bathroom by herself, and constantly talks about her magic or other completely irrelevant topics during inappropriate moments. At one point, the other students agree that she would be incapable of creating a very complex plan, as Maki points out that she is "a bit slow". Because of all of this, she has difficulties connecting with others, and her overall behavior seems to suggest that she may have some form of disorder. Even though it often cannot be seen from the outside, she does feel strongly on the inside and suffers from terrible fear during the killing game. 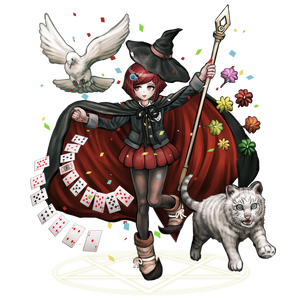 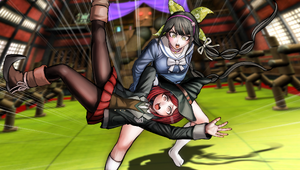