Help Ken change the world so humans and ghouls can coexist peacefully.

Protect Ken and Touka (both succeeded).

Kureo Mado (her arch-enemy and victim who killed her parents)

Hinami Fueguchi is a supporting protagonist of Tokyo Ghoul. She is an orphan ghoul whose parents were both tragically killed by Ghoul Investigators. The CCG currently holds insufficient information about Hinami, and therefore has not succeeded in eliminating her.

Before, she and her mother sought help from the owner of the Antique Cafe to acquire food. Hinami is a shy and childish girl with a very gentle heart. She is also eager for knowledge and fond of reading in order to learn. She cares deeply for Touka and Kaneki as if they were her older siblings, constantly expressing sadness and worry for the two's unhappiness.

Even during her childhood, Hinami is stronger than ordinary ghouls. Typically, ghouls only inherit the Kagune from one parent, but Hinami inherited both the Koukaku Kagune from her mother and the Rinkaku Kagune from her father. With the Koukaku on her shoulder blades and the Rinkaku emerging from the waist, she has surpassed her parents to be strong enough to fend for herself. She has a great sense of smell that can detect enemies even in heavy rain. She could tell that there is something off with Kaneki's smell, while average ghouls might consider him a normal ghoul at first. Her sense of hearing is also great, being able to overhear inside a building that it makes sounds hard to get out.

She is voiced by Sumire Morohoshi in the Japanese version of the anime, and by Lara Woodhull in the English version.

A young girl with resemblance to her late mother, Hinami has short straight brown hair, brown eyes, and often wears a hairband decorated with two four-leaf clovers, a common motif for her.

She was identified as the 'daughter ghoul' when she was wearing her butterfly dress and coat. Now she currently disguises herself while moving around the 20th ward.

After the timeskip, Hinami's hair is arranged into a bobcut with her fringe parted towards the right side of her face. She first appears in the opening montage wearing a long, black, hooded cloak. Later on, she wears a plain white shirt, along with a dark-colored long skirt.

Hinami is a shy and childish girl with a very gentle heart. She is also eager for knowledge and fond of reading in order to learn. She cares deeply for Touka and Kaneki, constantly expressing sadness and worry for the two's unhappiness.

After the timeskip, Hinami's demeanor has become much more calm, collected and somewhat distant. Her experiences since Kaneki's disappearance and the CCG's new agenda has caused her to lose much of her previous cheerful stance and instead take on a jaded, realistic outlook on life.

Since joining Aogiri Tree, Hinami's persona has become more solidified, for she is no longer terrified of smelling or seeing death, as shown through her interactions with Torso and Ayato.

Hinami had loving relationships with both her parents, and missed them dearly after their deaths. Her mother Ryouko taught her to live in the human world and educated her in literacy. After Hinami was orphaned, she confined herself in sorrow for days, but decided to live on in respect to her mother's last wish.

Hinami sees her as an older sister and loves her, willing fight back against whoever harms Touka despite her own pacifistic nature. In return, Touka is fiercely protective of Hinami. After the death of her parents, Hinami lived with Touka until she joined Kaneki's group of ghouls.

After the two bonded over reading, Hinami and Kaneki quickly developed a close sibling-like relationship. In later chapters, she expresses worry to both Tsukiyama and Takatsuki Sen over his sad and stoic demeanor, desiring his happiness. She is one of the few able to make Kaneki genuinely smile after his torture at the hands of Aogiri. Even years after Kaneki's disappearance, Hinami still thinks of and misses him.

When Tsukiyama joins Kaneki's group, Hinami is wary of him at first, aware of his past attempts to eat Kaneki. However, when he takes her outside against her curfew and conspires with her to make Kaneki feel better, Hinami begins to trust and enjoy his company. When encountering Nishiki and Touka, she defends Tsukiyama against their accusations. Because of the flowers he regularly brings to the group's hideout, she affectionately refers to him as "flower man."

She has long been a fan of Takatsuki's works, enjoying them despite their advanced level. When the two meet in person, there is an immediate connection between them. Takatsuki later seeks her out, and offers her advice and assistance in the future. Hinami was unaware of her new friend's true identity as the "one-eyed owl" Eto, but during and after the timeskip both serve as members of Aogiri.

Banjou is one of Hinami's caretakers and companions in Kaneki's group, and she enjoys his company. The two watch horror movies together, even though he is easily frightened.

The two work closely together as members of Aogiri, and seem to have a comfortable relationship.

She has acted as his primary contact for Aogiri, delivering messages to him and retrieving the data he prepared for them. They seem to be comfortable with each other, and after he officially joins the organization, he seems to spend time in her company. Saeki is in awe of her unique abilities and admires her.

Hinami also has a great sense of smell that can detect enemies even in heavy rain. She could sense the difference in Kaneki's smell upon their first meeting, while others might initially assume him to be a normal ghoul. Her sense of hearing is also above average, being able to eavesdrop inside a building from outside. However, she is still a pacifistic ghoul with little incentive or desire to fight. 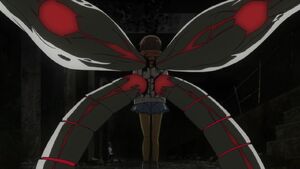 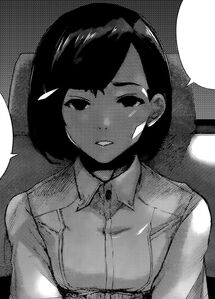 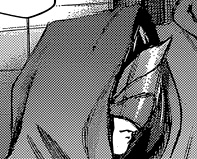 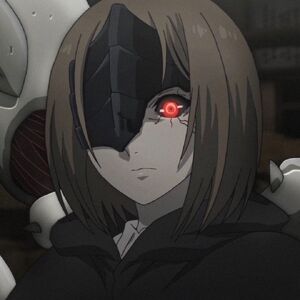