Start a Wiki
Hinata Himezuru is one of the characters in XBlaze Code: Embryo.

A half-finished Embryo that was created by the Takamagahara to power the T-system; after having survived the Wadatsumi Mass Vanish Incident, an unknown person wiped out all records of her being the Embryo, and planted her in an orphanage where she met Yuki Himezuru and Touya Kagari. When Yuki became old enough, she left the orphanage and adopted the two children. Hinata became like family to Yuki, and Tōya, as well a close friend and love interest to Akira Kamewari. Unconsciously, she was using phenomenon intervention to reset the world every so often, putting the world in a constant time-loop which few had noticed. She is a student in class 2B of Hakuou North Academy.

Hinata accidentally woke up Tōya Kagari while waiting for Akira Kamewari. She reminded him that he had work in the day and that it was past-four in the afternoon. After a short moment, Akira finally arrived and talked to Tōya about the information he had compiled on the local serial killer, confusing the young girl until they explained the killings to her, shocking Hinata. Eventually, Tōya left for work, and Hinata talked to Akira about him until she had leave to get the shopping.

She waited until Tōya had arrived back at the residence, introducing him to Es who had arrived slightly earlier. She expressed happiness at the fact that Es had saved Tōya, and after talking a bit, the door rang. Hinata went to answer, meeting Mei Amanohokosaka and Sōichirō Unomaru for the first time. When the latter requested tea, she realized that they had none, and rushed to the shops to buy more. She allowed Es to stay the night with them.

The following day, Hinata delivered the news to Tōya that Es had to leave under mission orders. She then walked with him to school, meeting up with Akira along the way. The three of them arrived and walked into class, only to find that Es had enrolled into their own school. After school, she, Es, and Tōya walked back home, but was left behind as the latter two rushed in Akira's direction. They returned a little while later with Akira in tow, standing idly by as Tōya berated him. Hinata then walked home with Es, and Tōya.

When she did return home, she was wrestled by Yuki, surprising her with her favorite meal - steak. She then began to run a bath for her sister after they had finished the meal, but was disheartened when she was told that Es and Tōya would be going out. In the morning, Hinata stood by Yuki's decision to let Kuon Glamred Stroheim stay with them, letting both Es and Tōya understand the circumstances; she then dragged away the former to let Kuon and the latter have a private talk about the situation at hand. At school, she sat by as Kuon was introduced to the class, posing as an 'exchange student'. A little later in the day, Hinata had lunch with Akira, Es, Kuon, and Tōya, having prepared shiitake mushrooms for the latter three, to Kuon's distaste. At night, Hinata quickly put Es in the bath after she returned from a fight with Ripper - Tōya soon followed suit.

Post-school the next day, Hinata went shopping with Es and Tōya for the dinner of the night since Yuki would be eating with them. At the house, Hinata prepared a magnificent feast for everyone; afterwards, she was invited to go swimming with them all at the local pool. She revealed that she is unable to swim, prompting her to be taught for a short time.

Hinata was introduced to Elise von Klagen of the Magic Guild. The mage was invited into the Himezuru residence to await Kuon's return; when she did eventually turn up, Hinata agreed with everyone else present to have Kuon stay with them instead of return to Ishana. Elise's claims of love for Kuon moved Hinata, and she extended an offer for the young mage to stay with them, something that was gladly accepted.

Having been pestered by Akira for some time, Hinata gave in and went shopping with him. While shopping, they bumped into Kuon, Elise, Es, and Tōya. Thanks to Kuon having caught on to Akira's feelings for the young girl, she and the other two girls dragged Tōya away. Hearing an explosion in the distance some time later, Hinata and Akira rushed to the source, seeing that the cause was Acht of the Ten Sages, who was in the middle of a stand-off with the group they met earlier. Despite the danger present, Hinata shouted out to them to be careful, until Acht suddenly stopped and disappeared without a trace; Hinata then received a text from Akira, saying he had to leave due to family matters.

Acht captured Hinata, knocking her out and holding her hostage until Es and Tōya arrived much later. Having been rescued by the duo with the assistance of Kuon, Mei, and Elise - Hinata, surprisingly, had no injuries and was put to bed to rest. She was unaware of Akira's transformation into a Drive Union and the events that had just occurred. Es came to Hinata and Yuki for advice on how to come back into Tōya's favor later on in the night.

Ripper kidnapped Hinata, taking her hostage onto an unfinished building, and hanging her by a chain over the edge. Her phone was stolen and Ripper called Tōya, doing a mocking impersonation before beckoning him to find them. Even though Tōya and Kuon had managed to find Hinata, there was naught that could be done, and Ripper cut the chain that held her, sending her hurtling off the edge. Thankfully, Es arrived just in time and saved her. The supposed death of Hinata caused Tōya' Original Grimoire to go berserk, but the realization that she was alive calmed him down. Obliging with Mei's orders, Es took Hinata back to her home so that she could rest.

Having had enough rest, Hinata waited for everyone to return, immediately sending Es off to get a bath when she arrived from the sewers, and telling Tōya to wait. Afterwards, Hinata went to the shops to get some more pudding after Es asked for some. When she arrived, she fed everyone present, was told about Akira's medical progress, and saw them off as they went on their way to the Restricted Ward. By herself, Hinata secretly wished that Akira, Elise, and Yuki were with her so she could have company; the doorbell rang, and she went to answer it, believing that someone had left something behind.

As she opened the door, Hinata was kidnapped and taken to the Restricted Ward where Sōichirō inserted her into the T-system to power it. She wasn't alone as Es and Tōya attempted to save her, yet they were cast aside as Sechs appeared, wiping out everyone else in the room before striking down Hinata, casting her into the Boundary. As she fell into the Boundary, Es joined her, and the two conversed. Es managed to physically imagine the young woman and Hinata transferred the Embryo to her; with her new power, Es transported Hinata back into her room, leaving her with no recollection of the previous events. Back home, Hinata and Tōya went to visit Akira in hospital. Because he couldn't move his hands, Hinata spoon-fed Akira some pudding, to his secret pleasure.

Hinata appears to be a cheerful, kind, and polite person. She cares for everyone she meets, and treats everyone equally. Within minutes of meeting someone, she treats them as if she had known them for years. Although somewhat of a ditz, many characters find themselves comforted when around Hinata, finding her presence to be a calming one. Even as a small child, she was remarkably caring, crying at the mere thought of not being with Tōya Kagari and Yuki Himezuru. Because Yuki's job demands her to absent from the household, Hinata has taken over the motherly role of the family, being a central part of it.

Hinata is a young girl with a round face. She has brown eyes and her hair is light brown styled in a bob cut. She wears lime green glasses and always wears a cheery blossom clip on the left side of her hair. Hinata's main outfit is a lime green, sleeved leather jacket with a fur collar. Underneath it, she wears a light orange turtleneck, a long white skirt, a pair of pink socks and wears matching lime green leather boots.

At school, she wears a navy seifuku with a school emblem on her red scarf.

While at the pool, Hinata wore a striped green bikini, with the chest piece held together by a bow, while the straps wrap around the back of the neck. The bottom piece is a flowing striped green skirt.

As the Embryo, Hinata discarded her glasses as her eyes turned an azure blue. Her legs are wrapped by a grey metallic sheet that reaches to the top of her hips, while the same kind of sheet wrapped around her forearms. While her torso is mainly naked, small sheets of metal partially cover her breasts. Her usually straight hair was frayed.

In Lost: Memories, Hinata wore a long light green dress with white frills and a white collar accompanied by a light brown bow. Over this, she wore a slightly darker green cardigan that was decorated with tiny adornments on the ends of the sleeves. Hinata also wore simple green boots with white cravats adorning the tongue. 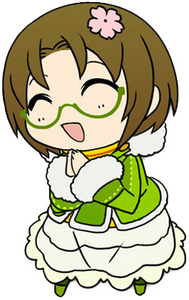 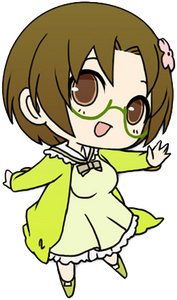 Add a photo to this gallery
Retrieved from "https://hero.fandom.com/wiki/Hinata_Himezuru?oldid=1720627"
Community content is available under CC-BY-SA unless otherwise noted.