Tending her pegasus, to train to protect Corrin

getting along with Corrin

Princess Hinoka (ヒノカ) is a major playable character from Fire Emblem Fates on the Birthright and Revelation routes. Hinoka is one of the princesses of the country, commanding the loyalty of Azama and Setsuna as her personal retainers.

Hinoka is the second child of the four in the Hoshidan royal family. She is the younger sister of Ryoma, the older sister of Takumi and Sakura, the step-sister of Corrin, and the adoptive sister of Azura. She was very much attached to her step-sibling, Corrin. However, Hinoka lost them when they were kidnapped as a young child and raised in Nohr. Furious at her inability to prevent the kidnapping, Hinoka thereafter began training as a sky knight around the age of seven. Her natural inclination to be rash and hotblooded often made training difficult for her, a fact only worsened by pegasi only accepting riders whose hearts are calm and not ruled by passion. As a result, she had trouble training her steed over the years, often running into accidents due to not being able to properly handle it. One of these accidents allowed her to meet Azama, who tended to her injuries and helped her to return home. Forming the impression that Azama was a kind and benevolent monk, Hinoka later hired him to serve as one of her personal retainers.

According to Hinoka, she had, over the years, attempted to infiltrate Nohr and rescue the Avatar on multiple occasions, although each attempt was halted by Ryoma and Mikoto.

At the end of Chapter 6, depending on the side the Avatar chooses, Hinoka's involvement in the plot will be altered.

Hinoka makes her first appearance in Chapter 4, where she defends Sakura from a Faceless horde. Fortunately, Ryoma, who had learnt of their plight beforehand, rushes into the scene and manages to quench the Faceless horde alongside the Avatar, Rinkah and Kaze. Upon learning of the Avatar's identity, Hinoka, overcome by joy, buries her face into their chest and sobs.

Later in Chapter 5, tragedy strikes as the cursed blade of Ganglari that the Avatar owns explodes, destroying the town and killing Mikoto. With war inevitable between Hoshido and Nohr, Hinoka accompanies her siblings to the Plains of Hoshido in Chapter 6, where the two armies meet in battle.

The Avatar decides to stay with Hoshido as they cannot stand the atrocities that King Garon orchestrated against Hoshido and fights with their birth family to help repel Nohr, much to Hinoka's joy.

Hinoka subsequently reappears in Chapter 8, where she, along with Azama and Setsuna, embark on a mission to join up with Ryoma and Takumi's forces. While attempting to pass through the region that the Wind Tribe Village is situated in, the group runs headlong into the conflict that arises between the Wind Tribe and the Avatar's forces. The group is introduced at this juncture in a rather comical fashion, with Setsuna absentmindedly getting ensnared by quicksand and Hinoka attempting to help her while exasperatedly chastising Azama for his lighthearted, sardonic regard of the situation. Hinoka joins up with the Avatar after exchanging information with them, thereafter accompanying them to locate their missing brothers.

In Chapter 9, Hinoka, Sakura and the Avatar are invited into the palace of Izumo by Izana. When Izana lures the Avatar and Sakura into a trap, Hinoka, along with Kaze and Saizo, manage to save them after she comes to the realisation that Izana's eccentric mannerisms are antithetical to his royal status. However, her theory is proven wrong when they meet the real Izana, who acts in exactly the way Zola has portrayed him.

Afterwards, in Chapter 10, Hinoka and the Avatar's army are reunited with Takumi, who unexpectedly emerges while they are in the midst of engaging the ninja of Mokushu in battle. Much to their immense horror, Takumi, in a hostile reverie, launches attacks on his allies. Fortunately, Azura manages to intervene by serenading a song to calm Takumi's mind and guide him back to his senses.

The battles waged against Garon both in Chapter 27 and the Endgame see Hinoka successfully helping the Avatar slay Garon with their army. Upon returning to Castle Shirasagi in Hoshido, Ryoma is crowned Hoshido's new king in a ceremony also attended by the surviving Nohrian royals as Hinoka and her siblings proudly watch on. Some time after Ryoma's coronation, Hinoka carries the Avatar on her pegasus steed to the newly rebuilt town square of Castle Shirasagi. Here, she, alongside her siblings, prays and convenes to a new statue of Mikoto that has been erected in her honor.

The Avatar decides to return to their adopted family, shocking Hinoka and her siblings. Despite their pleas to have them reconsider, the Avatar remains resolved to return. Left with no other choice Hinoka and the others are forced to fight against the Avatar, but soon retreat due to the power the Nohrian siblings wield.

Hinoka later appears in Chapter 11, where she, alongside her retainers, Kaze, and Rinkah, seek to protect the Rainbow Sage from being kidnapped by the incoming forces of Nohr. The Avatar and their army eventually succeed in ascending the peak of Mount Sagesse, whereupon they enter the Sevenfold Sanctuary with the intention of seeking the Sage. Hinoka prepares her forces to defend the stronghold, but after a long battle, the Avatar eventually defeats her. When she gives the order to retreat and leave the dead behind, Rinkah informs her that not a single soldier in the Sanctuary had been killed. Much to Hinoka's surprise, the Avatar had ordered their troops to avoid killing anyone. She is thereafter allowed to escape without any further opposition from the Avatar's forces.

Hinoka makes her next appearance in Chapter 18, where she, alongside her siblings, encounters the Avatar and their siblings in Izumo. Immediately launching into a heated exchange of hostilities with Xander, both crown princes attempt to engage in a duel, only to be stopped by Izana, the duke of Izumo. Izana then proceeds to confiscate the weapons of both parties before leaving the scene. He later reemerges with two soldiers and apprehends Ryoma, thereupon unveiling himself to be but a guise used by the deceptive Zola to kidnap the Hoshidan royals. Trapped in an execution room with her siblings, Hinoka is later rescued by the Avatar's army, spearheaded by Xander's refusal to support Zola. Following the end of the ensuing battle, Hinoka and siblings join the Avatar and the Nohrians in a feast, during which they, despite their enmity, maintain peace in reverence of the laws of Izumo.

Hinoka is absent until the onset of Chapter 24, where she leads the defence of Castle Shirasagi. Alongside Azama, Setsuna and a sizable army under her command, Hinoka stages a valiant effort to protect the castle, using a Dragon Vein in an attempt to overwhelm the Nohrians with her fliers. She is, however, defeated by the might of the Avatar's army. After the battle, Hinoka unhesitatingly steps before the Avatar and demands that they take her life but spare those of her soldiers. The Avatar instead decides to spare her life, telling her to hide until they finish with their plan to place King Garon on the throne of Hoshido to reveal his true form. He also tells her that Sakura is safe as a prisoner of war. However, they demand that they take her bloodied naginata as proof to King Garon of her supposed execution.

After the Avatar and their Nohrian allies end the war, Hinoka appears with Sakura to attend Xander's coronation as the successor to the throne of Nohr. Due to Ryoma's death, Hinoka becomes the new queen of Hoshido.

Due to having formed a deep emotional attachment with both families, the Avatar refuses to pick a side to align themselves with. Despite the Avatar's desperate protests, Xander and Ryoma cross blades with each other in an attempt to sway them into choosing a side. In a bid to prevent both armies from battling each other and retreat from the Plains of Hoshido, the Avatar decides to take down both Xander and Ryoma. Hinoka and her siblings aid Ryoma in battling against the Avatar but are unable to prevent them from succeeding. The Avatar is thereafter branded a traitor and forced to flee.

In Chapter 16, Hinoka decides to leave Castle Shirasagi to join the Avatar's cause, despite not knowing what it is, bringing Setsuna and Azama in tow. Much to her surprise, Ryoma and Scarlet also decides to join their cause. As they bid farewell to Yukimura, he tells them that he will do his best to defend the castle, though they cannot complain should any damage be sustained to their rooms. Hinoka makes haste to the Bottomless Canyon where they join the Avatar and their army, already in battle against Hans.

Though born a princess, Hinoka's personality is nothing typical of one. Serious, determined, and unsophisticated, Hinoka has the spirit of a natural warrior and valiantly charges into battle with utter fearlessness and courage. This spirit of Hinoka's is strongly complemented by her passionate sense of patriotism, one that compels her to personally take up arms in order to defend her homeland and its people from coming under harm. In this regard, she has the tendency to charge headlong into battle with wild abandon, often disregarding her personal safety and the objections of others as she does so.

Ryoma and Hinoka note that in the past, she was much more shy and even a crybaby. However, the Avatar's kidnapping proved to be a turning point both in her lifestyle and her personality. Their kidnapping is a source of much guilt and regret in her as she was unable to rescue them. Hinoka became devoted into becoming a warrior in order to gain the strength to rescue them. She is known to overwork herself to the point of exhaustion as shown in her support with Hinata.

As a side effect, this caused her to be unintentionally neglectful to Takumi and Sakura, as well as Azura, not spending a lot of time with them, with her supports being possibly the first real bonding time she's ever had with them.

Despite that, she cares deeply for them, with her supports with Subaki telling that, in the midst of a heavy storm where pegasi couldn't fly, she charged into a forest to look for Sakura with complete disregard for her own safety.

It is through Hinoka's adamant desire to protect others that a softer side to her personality is simultaneously revealed; she is, at the core, selflessly compassionate, where she values the lives of others more than she does her own, no matter what their social class may be. This is especially evident in her supports with Azama, where, in spite of his protests, Hinoka desperately attempts to salvage the life of a fatally wounded soldier, unreservedly demanding him to lend his healing assistance to her.

She is the most caring person in the army, knowing plenty of soldiers by name and being very considerate to them. Her birthday is August 18. 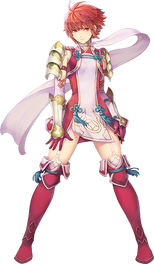 Portrait of Hinoka in Fire Emblem Heroes, illustrated by HACCAN
Add a photo to this gallery

Hinoka at the Fire Emblem Wiki

Retrieved from "https://hero.fandom.com/wiki/Hinoka?oldid=1962706"
Community content is available under CC-BY-SA unless otherwise noted.