The Ball Snatcher
The Castrator

To kill Kamakiri for his father's death
To defeat Monsoon (failed)

He is voiced by Kenji Nomura who also voices Iron Tager, Yammy Llargo & Arbormon as adult and Akiyo Kanada as young.

He has pale golden fur, reddish brown ears, dark muzzle markings, and blue eyes. He has a slashed right eye and he got it from Kamakiri when a young Hiro tried to save his father.

In the series, Hiro was originally a loner. He is very brave but a bit short-tempered. He enjoys fighting, and once mentioned a bit comically that he might be a masochist.

His only goal in life was to become big and strong in order to kill and defeat Kamakiri, the dog who murdered his father. He lived alone for a long time and didn't really care about others.

He is known for castrating his opponents, because "only a real male needs to have balls between his legs". Though he is quite rough to other males, he seems to be kind towards females and tends to save those he sees in trouble.

He is interested in Gin due to his reputation, though he also mentions that he doesn't judge others based on rumors. Because of what happened to his father, he hates people who fight many against one.

He is eventually greatly moved when he realizes the loyalty, courage and rightfulness of the Ōu army with the example of John and realizes he wouldn't be alone anymore. He starts to turn more social and even comical at the times. After he leaves the revenge behind, he focuses on building a better future and living with his friends and family.

Hiro often lets Mole ride on his back and doesn't seem to be bothered by this. Actually, he seems to like helping the little guy.

When Hiro was a puppy, he and his father, Yukimasa, were attacked by the Irish Wolfhound, Kamakiri. Hiro tried to save his father but fails to and he gets a slashed eye. His father was then killed and Hiro swore to get revenge.

In the beginning of Hougen arc, Hiro appears suddenly and without warning in the story. He saves the female Akita mix Reika by using his castration special attack (which painfully rips off the testicles of his opponent). He also appears in time when Gin, John, and Akame are in trouble with the Great Dane, Hougen, and his pack. As he fights bravely, he allows the Kishu to escape (so that Akame could send an emergency message) but unfortunately, he is taken as a prisoner together with Gin and John by Hougen.

After a while, Hiro and John escape with the help of Hook, Sasuke, Lefty, Tomi, and Roshi, as well as freeing Reika who was also taken as a prisoner. Hiro warns John not to fight Hougen because of his wounds, but John would not listen. Hiro leaves John with Reika to search for Weed. He joins him and decides to help him find more dogs to defeat Hougen and his soldiers.

Finally, Hiro gets his chance to get revenge when the group face his father’s killer, Kamakiri. Hiro fights him for a long time and when it seemed like Kamakiri would win, Hiro jumps up and rips off his testicles, leaving Kamakiri severely wounded and in pain in the mountains. Hiro has now avenged his father’s death.

After the final battle, Hiro falls in love with Reika and together they have four sons.

In Hokkaido arc, he volunteers himself into Weed's reinforcement to fight Victor and his pack in order to save Gin and the Ohu Soldiers who are in trouble. After Weed recruits several hundred pet dogs to join the fight, his group travel for several days and miles to the battlegrounds. However, the pets begin to lag behind since they aren't used to running for so long.

Hiro grows impatient with them at first, but under Weed's orders he stays with them to guide them as Weed and the others run ahead. As they get close, Aram and his small unit appear and attack them. Since Hiro is the largest dog present, he is mistaken to be the leader and is attacked by Aram. Although the shepherd manages to scratch each side of Hiro's head and dodge all his attacks, a well aimed head butt from Weed to Aram provides Hiro a chance to attack him, but before he can kill him, Weed orders Hiro to let the Russian Army dog go. Reluctantly he does so and continues with Weed to help the Ou Army.

After the fight is over, Hiro is among those who attack the remaining Russian Army on the beach. Hiro successfully kills a few Russian dogs and bears witness to the death of Victor himself.

After some peace and quiet, Hiro and some others move to Japanese Alps, where hybrid bears are causing trouble. Hiro fights the bears with his friends, but is wounded by one of them and ordered to stay behind until he recovers. As he does so, GB is badly injured as well and begs Hiro to take him to Weed. Initially, Hiro refuses until Sasuke agrees to take him instead. Hiro decides to attack the bears again, and is nearly killed after being thrown off the cliff, but survives the fall and climbs back up, only to discover GB was killed and Weed is missing.

A long search ensues until the Ou army give up and come to the conclusion Weed and Jerome are both dead, so they continue their journey alone. A few days later, however, Weed and Jerome return to the group, and are met with a warm welcome.

Nicknamed "The Ball Snatcher" as he usually defends himself by castrating his enemies. He helped John and Reika escape from Hougen's clutches. He later joins Weed's group.

He seeks vengeance on Kamakiri for murdering his father and slashing his right eye. He finally defeated Kamakiri by ripping his fangs out and castrating him and avenged his father.

Hiro is among those captured and locked in a shed by Kurohabaki Jinemon. He is later saved and released into the mountains with his wife and children.

Hiro is ambushed by Monsoon and his kin, who slash him across his head and shoulder. The wound is not serious and he is able to take a heavily wounded George to safety but is once again ambushed by bears who block his path. Hiro puts George down and attacks the bear in front of him, biting its head. George and Rocket help keep the bear still whilst Hiro tears away at the head, killing the bear. Hiro then carries George up the hill to Gin and the others. Hiro orders his children to be strong before he runs to help Gin who has acted as a decoy to lure the bears away. Hiro finds Gin at the edge of a cliff surrounded by Monsoon and his kin. He charges towards them, but is crushed under Monsoon's large paw.

Monsoon lifts up his paw, tearing his claws out of Hiro's back, flinging the injured dog to the floor. Gin questions why Hiro disobeyed his orders and attacks the bears himself, but his blindness hinders him and results in him getting wounded. As Monsoon is about to kill Gin, Hiro manages to get up and leaps towards Gin, shielding his body and taking the strike once again.

The blow sends both him and Gin over the edge of the cliff and into the water raging below. Monsoon takes a moment to see his victory and throws down a load of boulders into the gorge before roaring in victory.

Further down the stream, a young boy is fishing with his dad when his fishing hook snags something. He pulls it out to find the body of Hiro still holding firmly onto Gin, who has fallen unconscious. The boy's father recognizes Gin because of his brindle fur, and knows he was once Daisuke's dog. Hiro's body is later buried by Daisuke, who offers flowers and incense for the heroic dog. 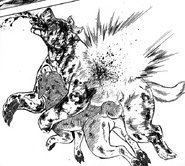 Retrieved from "https://hero.fandom.com/wiki/Hiro_(Ginga_Legend_Weed)?oldid=1777740"
Community content is available under CC-BY-SA unless otherwise noted.