Hiro is speculated to be the fourth strongest blader in the series, behind Kai, Tyson and Brooklyn. Hiro first appeared as his alter ego, Jin of the Gale , when Ray was in the woods. He battled Ray and had beaten him easily. When Tyson and Daichi were at the tournament, he showed up again, telling Tyson that he needs to rebuild his team because if he doesn't the Bladebreakers will be gone forever. When Tyson won his match against Kotaro, Hiro told Tyson that 'Beyblading isn't about winning. It's about how you play the game.' When Kai and Daichi started their fight, Hiro was watching Kai, waiting to see what he was about to do. After the veteran had taken down Daichi easily by releasing Dranzer, Mr. Dickenson made an announcement that Hiro was the new coach for the G-Revolutions. When Tyson and Hiro had reunited, Kai turned away. During Daichi and Kai's rematch, Kai's new Dranzer Gigs hit Daichi's Strata Dragoon Vurst in the air. As a result, Dranzer soared in the direction of Hiro, surprising both Hilary and Kenny. It then collided in the wall very close to Hiro's face. When Dranzer returned to Kai's hand, he glared at Hiro, showing his anger for not being able to fight Tyson. When Kai was battling Brooklyn, Hiro insulted Kai's skills as a Beyblader, telling him that he won't be able to match up to Brooklyn's talent. Later, Tyson was shocked to find out that his brother had joined the BEGA league. Later, after the world was saved from Brooklyn's destruction, Hiro helped restablish the BBA and end BEGA. Hiro's Beyblade that was seen in the anime is Metal Driger. 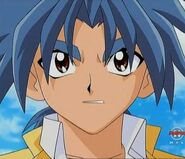 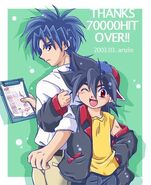 Hiro and His Brother Tyson
Add a photo to this gallery
Retrieved from "https://hero.fandom.com/wiki/Hiro_Granger?oldid=1691370"
Community content is available under CC-BY-SA unless otherwise noted.