Soldier of the Walls (under Survey Corps after training as a cadet; formerly)

Queen of Paradis Island and the Walls

Hanging out with Ymir (past).

Historia: keep her promise to Ymir by living life as her true self.
Defeat Rod Reiss, so she can become the real queen of the Walls and save the Eldians within the Walls (succeeded).
Help her father to reclaim the Reiss family's power and eat Eren to gain the Founding Titan (abandoned).
Reunite with Ymir (failed).
Christa (all former goals): Die an heroic death and be remembered as a good person.
Become like her ancestor Ymir Fritz (failed).
Follow Ymir wherever she goes.

Historia Reiss (originally introduced as Krista Lenz) is a major protagonist of the anime/manga series Attack on Titan. Initially introduced as a kind girl who likes helping others, she is eventually revealed to be the illegitimate daughter of the nobleman Rod Reiss and the last remaining member of the Reiss royal family.

She is a recurring supporting character of the story and one of the two main protagonists of the Uprising Arc, along with Levi Ackerman. Eren Yeager regains his role as the protagonist in the succeeding arc.

After Kenny kills her mother and attempted to kill her when she still a child due her noble status, Rod Reiss (her father) intercepted their efforts by offering an alternative arrangement: that if, she were to disappear from the Reiss household, assume a new name and identity before enlisting as a soldier, that would mean they would not need to kill her. The soldiers agreed with this, and Rod Reiss then gave her the new name and identity of "Krista Lenz".

As Krista Lenz, She is a very useful and kind girl, who enjoys helping other people. She is highly charismatic, often making people see her as a goddess. She also seems to be somewhat shy and doesn't know how to react in certain situations. However, as noted in later chapters, her desire to perform good acts partly stems from a desire to gain honor through them. She seems to want this honor and glory because of her dark past. But changes on the journey. Ymir notes that Historia's urge to show kindness to others stems not only from a desire to gain their esteem, but also that of the people around her: to be seen as a good person.

After being abandoned by Ymir, who leave her along with Reiner and Bertolt, Historia become very pessimistic, revealing her true name and her true personality, and claim no longer to be "Krista Lenz" that people always know to be so kind and shy, while herself is a vacant person. Although Eren Yeager tells her that she seems more genuine and "less creepy" now, she continues to regard herself as lacking any true nature or identity. During uprising arc, Historia slowly got her process in the story and slowly gain her own strength and her own identity. When her father tries to manipulate her by making her the next "Founding Titan" and eat Eren Yeager, she decides against his will and frees Eren and bravely kills him.

When she become a queen, she gains a more calm, mature, and charismatic nature. Like her Krista persona, she still has kind side, especially towards orphans inside the wall.

After the arrival of the Colossal Titan and breaching Wall Maria, Historia had began her training in the military. Upon graduation she had placed 10th, a rank under Sasha Braus (this was due to Ymir giving her the spot).

After the breaching of Wall Rose, Historia wasn't seen going into battle until attempting to help Armin overcome his dread of supposedly losing his friend. She helped Mikasa and the other trainees retake the supply room while the rogue titan kept the other Titans distracted. She didn't make an appearance again until when she had shown her Three Dimensional Maneuver Gear as the Military Police was looking for the one that killed the two captured titans.

Despite Historia's fears in facing the titans again after going through the same thing as Jean and the others, she stayed put and became a member of the Scouting Legion. There, she helped save Reiner, Armin, and Jean by supplying a horse after they were stranded from an encounter with the Female Titan.

She was seen up on the trees baiting the titans and preventing them from entering the forest as the Scouting Legion attempted to capture the Female Titan. After this she wasn't seen again until the Ape Titan attacked with the other titans.

When Pastor Nick revealed that to the members of the Scouting Legion that Historia may know about the walls having titans inside them because of her family, and that she went under an assumed name after being caught in the middle of her relatives' dispute. It wasn't long until Eren and the others realized that she was often around Ymir.

When she remembers being with Ymir when they were helping Daz in her hometown. She was confronted for living under an assumed name after being caught in the middle of a serious dispute between her relatives. Before transforming into a titan to fight the other titans attacking them, Ymir made Historia promise her to go back into living under her real name.

After Historia and the rest of the trainees watch Ymir fighting against the group of Titans nearly falling off the tower when Ymir transformed, to which Reiner questioned her is she knew about it but tells she didn't know herself despite being so close to her and refuses to believe it at first. When the Trainees question who's side Ymir is on, Krista remembers some events of her and along with the other watching Ymir's attempt to fight the other Titans and came to the conclusion that she is fighting to protect everyone. She begins to cheer for Ymir telling her not to die and to break down the tower and celebrates when Ymir does so. She, along with the others, ride on her back and land on the ground safely, except for Ymir, who is eaten by the Titans. As Historia tries to make her way to Ymir to fulfill her promise she is nearly grabbed by a Titan but is saved by Mikasa. As everyone watches in disbelief at Ymirs wounds and the truth, Historia reveals her true name.

She reveals her true name as Historia Reiss to Hanji and pleads with her to go easy on Ymir. While she knew what her friend did was wrong in hiding information that could've been useful to the Scouting Legion, she understood why she did it to protect her comrades. Hanji tells Historia she understands Ymir being a titan like Eren and being an ally of humanity, but the rules are not simple like she thinks. She watches with horror as Reiner in his Armored Titan form grabs Eren and Bertholdt snatches Ymir in his Colossal Titan form. 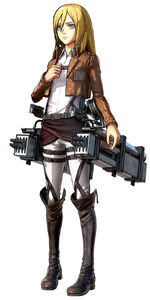 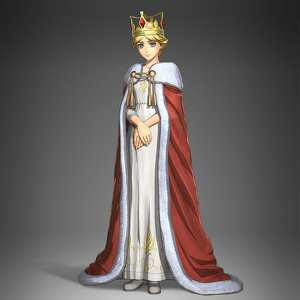 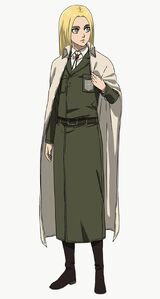 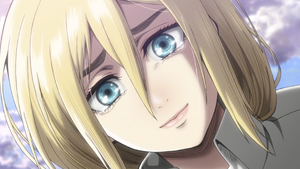 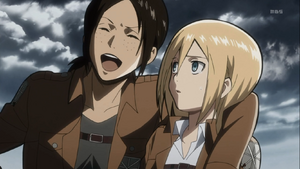 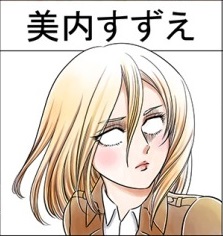 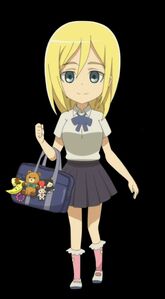