Hisui is one of the five main heroines of Tsukihime alongside Arcueid Brunestud, Ciel, Akiha Tohno and Kohaku. Her character image song is PARADE, performed by Soft Ballet.

She is the younger of the two twin maids in the Tohno mansion, the other being Kohaku. Her name, Hisui, is the Japanese word for jade, referring to her eye color.

Hisui was originally a member of a branch family of the Fujou clan, but was brought with her sister Kohaku to live in the Tohno mansion, because the Fujou clan had a special power of giving others energy. Makihisa Tohno needed this ability in order to keep control of his body.

Hisui, however, was never forced to utilize her abilities as a Synchronizer because of the pleas of Kohaku and instead found herself living as a normal girl. When Shiki Nanaya arrived to the Tohno house, at first he was unwilling to adapt to his new home, still traumatized for the death of his father. However Hisui was the one who encouraged Shiki to go out and play in the house. Her childhood was pleasant, and even though she is not naturally an active person, upon seeing Shiki playing so energetically she did her best to keep up with him.

After Shiki went to live with the Arimas, Hisui learned that Makihisa raped Kohaku so she becomes depressed. Kohaku, noticing this, promises Hisui that she will "take on her role" until she was cheerful again. Ironically, it is because of those words that Hisui is unable to return to her old self.

Hisui appears as a stern young woman, but actually she is a kind, loving and emotional girl, hiding her emotions to keep her sister as she is, due to the incident with Makihisa. Seeing Kohaku acting happy as Hisui was as a young girl, she cannot bring herself to return to her former self. Even if Kohaku is simply acting out her old role, she seems to have attained some level of happiness.

Hisui has short red hair, like her sister. She wears a bonnet on her head and a brown western maid uniform.

Because the events of Arcueid and Ciel, which keep Shiki away from the Tohno mansion, Hisui plays the role of cleaning maid to the Tohno family in their routes.

Shiki returns to the Tohno house after years. He remembers about a cheerful girl he got along with and a quiet girl who gave him a ribbon, but he cannot remember her names. After meeting with Hisui and Kohaku, Shiki mixes the two maids up, believing Kohaku to have been the girl he always played with and Hisui the girl who stayed in the mansion. Hisui's demeanor has changed so much, that rather than being the active girl he knew as a child, she has become severe and emotionless. During the Welcome Party for Shiki, Hisui, not used to drinking but wanting to do it for Shiki, drinks only one glass and then falls asleep. Shiki carries her to his room so she could rest and then he falls asleep as her remembers that the first person he met at the Tohno house when he was a kid was a cheerful girl who convinced him to play outside with the others. When he wakes up, he finds that Hisui is sleeping on the top of him, but apparently nothing happened.

Hisui, due to the fact that she knows of the abuse inflicted upon Kohaku, refuses to let any male so much as touch her, the one exception being Shiki later in her path. Still believing Hisui to be the quiet girl who gave him the ribbon, Shiki gaves Hisui the ribbon back.

More and more about her personality and who she truly is is revealed. Rather than the stern, immovable young lady she appears to be, Hisui is revealed to be a kind, loving and emotional girl, hiding her emotions to keep her sister as she is. Becoming a daily part of Shiki's life, Hisui wakes him up every day and prepares his uniform. However, she is hiding a darker secret, as she knows of her sister's plans for the downfall of the Tohno family, and after Shiki becomes paralyzed due to Tohno SHIKI stealing his life energy, Hisui offers her ability to Synchronize with Shiki so that he can stop SHIKI. She then accompanies Shiki as he goes to the school.

In Hisui's True Ending, after Kohaku reveals that she was responsible for the deaths of Akiha and SHIKI, she commits suicide by stabbing herself in the chest to end her "doll's existence". However she has no regrets, since due to her sacrifice Hisui was never touched by Makihisa. Hisui begins a relationship with Shiki and later accompanies him on his vacations. Before going, she throws Kohaku's ribbon to the sky.

In Hisui's Good Ending, after Kohaku reveals the truth about her participation on the downfall of the Tohno family, and claims that she hated Shiki for the silent connection between them (watching each other but never talking) Hisui appears and tells Kohaku that what is she saying is not true and that she truly loved Akiha and Shiki. She also tells her that if Kohaku was genuinely attempting to take on her role, using Hisui's original cheerful personality as her own, to never hate Shiki is an integral part of it. After Hisui's words, Kohaku ingests poison in order to commit suicide. She is saved by Shiki, who cuts the "lines" of the poison within her. She later lost her memory and she is renamed "Nanaya" by Hisui, and returns as a peaceful maid to the Tohno Mansion. After that, Hisui takes Shiki to her favorite spot to see the city together.

It should be noted that in both endings, Hisui returns to be the cheerful girl she used to be.

Hisui only plays a supportive role as Shiki's maid. Like in Hisui's route, he wants to give back the ribbon that the quiet girl who watched him from afar when they were young, gave him; but he mistakes that girl for Hisui. He tries several times to talk with Hisui about the ribbon promise, but she does not seem to remember it at all. Later in the story, Hisui reveals to Shiki that Kohaku is the girl who gave him the ribbon in their past.

In Episode 2, Hisui, alongside Akiha and Sion, play volleyball in a match for Shiki. In the end of Episode 10 Kohaku uses her special drugs to revert Hisui's old cheerful personality. Later Kohaku creates stories based on Hisui's detective persona with comical results, however Hisui does not like her stories, except for the last one. In Episode 12. she is one of Shiki's dates, although he barely spends time with her because Shiki claims that he is going for a ladder and a hammer, while he really goes to his other dates. She is the only one not to be angered at Shiki. She and Kohaku finally appear at the Ahnenerbe party together with Sella and Leysritt.

It should be noted tha despite having none of this powers in the original Tsukihime, in Carnival Phantasm she has the power of hypnotism (due to her fan nickname "Brainwasher Detective").

Hisui normally lacks any sort of combat capabilities. She is a Synchronizer, which allows her to transfer energy through the exchange of bodily fluids. While it can be done with those of the same sex through a transfer of blood, it is most effective through sexual intercourse with someone of the opposite gender. She has worked as a maid of the Tohno mansion for much of her life, which has made her extremely talented at most household tasks besides cooking. Even the simplest tasks in the kitchen are impossible for her, creating something nearly lethal no mater how easy the recipe. Kohaku happens to be strong at cooking while having the same kind of weakness with housework, so they tend to stick to their respective role.

During Melty Blood, under the influence of Night of Wallachia, White Len, or Dust of Osiris, she gains the ability to fight on par with all of the other strong inhabitants of Misaki. She makes use of a number of household items such as cleaning implements, cooking utensils, and even furniture like chair and tables as melee weapons. She brings them out of thin air, allowing her to attack with a number of different items in succession. She also gains the ability Fake Reality Marble: Guru Guru Hisui World and the Dark Jade Fist.

Dark Jade Fist is the Arc Drive of Hisui in Melty Blood, based off of the mystery story "Imogirisou" from Kagetsu Tohya. Reproducing the splendid action demonstrated by Hisui when she was possessed by the evil spirit, she stores up a mysterious energy while rotating both arm, then shoots it forward in a killer move. It appears that she is converting her complaints and dissatisfaction toward the excessively harsh manual labor she's put through every day in a similar manner to Wallachia's Malignant Information. It is useful for as projectile technique because it lingers after being launched to pressure the opponent. It becomes the Grand Dark Jade Fist during Blood Heat, showing the power to shake the earth itself. 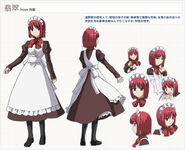 Mech-Hisui
Community content is available under CC-BY-SA unless otherwise noted.