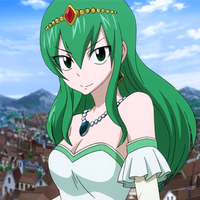 Hisui E. Fiore is a hero of Fairy Tail.

Hisui is a petite young woman. She has wavy light green hair that reaches down to the middle of her back with two strands that frame her face as well as a set of tufts that obscures the majority of her forehead, with the prominent tuft in the middle reaching down to the top of her nose. Hisui has large dark green eyes with long eyelashes.

As the Grand Magic Games progress, a guard tells the Princess that it is the best chance for them to take actions, whereupon she announces the Eclipse 2 Project. When Natsu, Wendy and Mirajane try to free Lucy and Yukino from their prison cell, a trap is activated and they are confined in an underground place, which Hisui refers to as the inescapable Abyss Palace. Hisui appears via a communication Lacrima, addressing them as thieves and telling them that they will rot there. However, although the guards near her celebrate, she carries an unhappy expression and questions her own actions. When she overhears the guards saying that the Garou Knights have been sent to execute the rescue team, she thinks to herself about the continuous backfiring of her strategy and prays for Arcadios' safety. Soon after, Hisui is approached by the guards who tell her that the Garou Knights were defeated by the Mages, causing her to breathe a sigh of relief. However,Darton approaches her, telling her that she shouldn't carry such a look. Hisui questions why he isn't at the Domus Flau, and he replies that he returned because he has a bad feeling. Questioning why Arcadios was sent to Abyss Palace without a trial, Darton states that he is aware of the fact that Hisui used Fairy Tail to rescue him and that she was both the mastermind behind the Eclipse project and allowed Arcadios to take the fall. Although Darton tries to prevent her from trying to change the world by such drastic measures, Hisui still insists on continuing with the Eclipse 2 Project. To Darton's surprise, Hisui reveals it to be the last chance of humanity, as its failure will cause the country to be destroyed.

Retrieved from "https://hero.fandom.com/wiki/Hisui_E._Fiore?oldid=1876861"
Community content is available under CC-BY-SA unless otherwise noted.