Mindy Macready a.k.a Hit-Girl is the deuteragonist of the Kick Ass film series. She is Damon Macready/Big Daddy's daughter and Dave Lizewski/Kick Ass' ally, best friend, student/apprentice and love interest.

She was portrayed by Chloe Grace Moretz, who also portrayed Young Penny in Bolt, Wednesday Addams in the remake of The Addams Family, Carrie White in the 2013 remake of Carrie, Cassie Sullivan in The 5th Wave, and Kayla Forester in Tom & Jerry.

Mindy Macready is a young girl whose father, NYPD officer Damon Macready, was framed for drug dealing by mob crime lord Frank D'Amico. Her grief-stricken mother, pregnant with Mindy at the time that Damon was framed, committed suicide after giving birth to Mindy. She was adopted by sergeant Marcus Williams, her father's former partner.

After Damon's release from prison, he was given custody of Mindy. He trained her in the martial arts and taught her how to use various forms of weaponry, including guns, knives, spears, and grenades, as well as teaching her how to take a bullet to the chest by wearing a bulletproof vest. As the deadly father-daughter crime-fighting duo Big Daddy and Hit-Girl, they set out to avenge Mindy's mother and Damon's imprisonment by tracking down and killing Frank D'Amico's henchmen and drug dealers one by one until reaching D'Amico himself.

When another vigilante named Kick-Ass gains extensive media attention, Mindy is impressed by his courage. She first encounters Kick-Ass when she saves him from a petty drug dealer named Rasul and his thugs. After discovering his true identity as Dave Lizewski, she and Big Daddy visit him at his home after re-routing his IP address. They see potential in him as a crime-fighter, and stay in contact with him should he ever need their assistance.

The latest superhero Red Mist, who in reality is the son of Frank D'Amico, tricks Kick-Ass into taking him to meet Big Daddy and Hit-Girl at one of their safe houses. Hit-Girl is viciously gunned down by the traitor, falling out of a window, and both Big Daddy and Kick-Ass are taken captive by Frank D'Amico's goons. Hit-Girl survives the attack due to wearing a bulletproof vest, and takes pursuit of the goons in the Mist Mobile. Her father and Kick-Ass are bound to chairs and brutally beaten on national television and later the internet. Before the goons can finish them, Hit-Girl appears, shoots out the lights and, wearing night vision goggles, takes out the goons, but not before one of them sets her father on fire. A heartbroken Mindy and a fatally burned Damon express their love for one another before he succumbs to his burns. She then releases Kick-Ass and the two escapes in the Mist Mobile.

Hit-Girl is initially angry with Kick-Ass for his unwitting role in her father's death, but after deciding to finish what she and her father started; to bring down Frank D'Amico's organization, she wants Kick-Ass to help her, giving him the choice to either live with the guilt of inadvertently causing the death of her father, or redeem himself by helping her defeat D'Amico. Kick-Ass joins forces with Hit-Girl, who gives him instructions on how to use a jet pack.

Mindy gains access to D'Amico's headquarters by disguising herself as a lost school girl. She promptly kills the guards and returns to her Hit-Girl guise. After engaging and killing most of the henchmen, she runs out of ammo and is forced to take cover. Just as D'Amico's largest goon, Stu, is about to kill Hit-Girl with the bazooka that he stole from Big Daddy's safe house, Kick-Ass arrives on the jet pack and kills Stu and the remaining thugs with gattling guns.

Kick-Ass and Hit-Girl then confront Red Mist and Frank D'Amico himself. While Kick-Ass and Red Mist fight in the training room, Hit-Girl faces the man responsible for her parent's death in his office. During an intense duel of martial arts, Hit-Girl is ultimately overpowered and incapacitated. D'Amico picks up his gun and is about to shoot her, but Kick-Ass recovers from his brawl with Red Mist and saves her life by blasting D'Amico out of the building with Big Daddy's bazooka, while a barely conscious Hit-Girl looks on in satisfaction, as her parents are finally avenged. The duo escapes the headquarters on the jet pack, and Hit-Girl thanks Kick-Ass for his help. They reveal their true identities to one another and shake hands in friendship.

Mindy and Dave retire from crime-fighting, and Mindy moves in with Marcus, who enrolls her at the same school as Dave, the first school that she has ever attended. On her first day, she is approached by two bullies who try to steal her lunch money, but she easily beats them up.

At the opening of the film, Mindy has taken Dave out to (possibly) the same field where she and Big Daddy had their target gun practice. After a few times, Dave (wearing a bulletproof vest) doesn't want to go along with it, telling her to not say "okay" if he doesn't want to do it, and then shoot him because "it's not cool". Mindy agrees to stop, but as Dave turns around, she smiles and shoots him in the back.

Later on, Mindy (now 15 years old) is starting her freshman year at the same high school where Dave is a senior at. However, after Marcus (her new guardian) drops her off, and the bell rings, Mindy takes a taxi to her "Hit-Girl" training studio, which also has her father's old suit and pictures of him/them before his death. Her absence is covered up, for now, because she went into the system and gave herself perfect attendance.

Dave (wanting to suit up again after seeing other people dress up as heroes) asks for help in training to be a better hero, as in "Batman and Robin," to which Mindy says that "Robin wishes" he was her. Dave points out to her that this way, she won't be alone anymore and that someone will "have her back".

So, both of them start training together, which includes him trying to fight her and more outdoor shooting, but after a while, Mindy becomes closer to her best friend/new mentor.

After coming home from school, Marcus asks where she has been at since the principal called to inform him of her not being at school to accept her perfect attendance award. Since Marcus does not want her to continue life as Hit-Girl, Mindy instead says that she went to the mall with a "boy" (Dave) that she likes

However, after saving Dave's life from a group of thugs (as Hit-Girl), Mindy is caught at home by Marcus, due to a blood stain on her cheek, so she has to promise to stop being her alter ego, go to school, and not see "that boy" anymore.

When Mindy tells Dave that they can't train anymore, she unknowningly causes him to break up with his girlfriend, Katie, who thinks they were seeing each other, and soon, the news of her "hooking up" with Dave are spread around the school. Then, Marcus takes Mindy to her first slumber party, which is held at the house of a possible 16-year old girl named Brooke. She and her two friends confront Mindy about Dave, asking if she "rode his disco stick" or even kissed him, followed by them showing her a music video by a boy band that causes Mindy to somewhat activate her hormones.

As she starts hanging around with them, Mindy spends a little less time with Dave, who wants her to come back in the superhero game, but she can't after having promised Marcus.

Then, at a dance tryout, Brooke is shown to be the most popular one, but when it's Mindy's turn, the former vigilante uses her skills and imagination to perform a somewhat kung-fu/fighting dance, which (to Brooke's annoyance) has everyone there turn their attention to Mindy.

Things get more sour between Dave and Mindy when she asks a varsity guy out on a date, trying to prove to Dave that she can be a regular teenage girl. However, on the night of her date, Mindy is brought to the middle of a forest somewhere, where the guy tries to hook up with her, but then, Mindy finds a group of parked cars and sees a whole group of "popular kids", which includes Brooke, who wanted to humiliate Mindy with some help from her "date" because of the tryout.

They leave her alone in the darkness, so Mindy (now embarrassed and saddened) walks all the way to Dave's house, and climbs into his bedroom, saying at first that she needed to "see my Robin"; after that, she starts to break down, and she hugs Dave for comfort, saying that the three girls were mean and that she doesn't know what to do. Dave tells her that they are just "high school chicks", and that she is a beautiful, smart, funny, and really strong girl. Mindy asks what should she do, and Dave says that she just needs to be herself and to beat them at their own game.

The next day, Mindy (wearing make up, lip gloss, and a pretty dress) confronts the girls, using the "Sic Stick" to cause them to throw up and Brooke to "poop" on the floor.

That causes Mindy to be suspended, and at home, she is grounded by Marcus. She also can't help Dave out with this "evil army" that is being held by the "Mother Fucker".

When Dave looses his dad to thugs of Chris D'amico, he and other members of "Justice Forever" attend, and Mindy comes, as well. But then, two of the Mother Fcker's goons kidnap Dave, and head towards his secret lair.

A few minutes before Dave gets stabbed, Mindy (on the van's roof) uses a gun to kill those inside, except one of them (nicknamed the Tumor), and she saves Dave's life while they both also find out where Chris's lair is at.

That night, Mindy tells Marcus that even though her father took away her childhood, she was also given a gift, and that she knows who she really is: Hit Girl

Inside the training studio, Dave takes off his shirt to change into his costume, and Mindy notices his upper body, which is now muscular and buffed up. She is speechless at first, but when Dave asks if she is all right, she snaps out of her trance, and tells him she is fine.

Kick-Ass (sporting Big Daddy's armor) and Hit-Girl arrive at Mother Fucker's lair, interrupting his villainous speech. Mother Fucker laughs off their presence with his army outnumbering them severely. However, other superheroes, including Justice Forever, arrive to help the two. After exchanging insults, both armies charge at each other and a massive brawl happens.

However, the syringe is revealed to be filled with what Hit-Girl describes as "adrenaline", allowing her to take the full blows of Mother Russia's punches and quickly kill her by stabbing her with multiple glass shards all over her body.

After the fighting is over with the superheroes winning, Justice Forever decides to disband, realizing they can no longer be superheroes, and Hit-Girl joins their final victory shout.

Later, Mindy takes Dave back home, telling him that she must leave New York in order to protect Marcus from police inquiry and because she is wanted for murdering several of the supervillains. Before she leaves, she kisses Dave, citing it as her first kiss before driving off on her motorcycle. 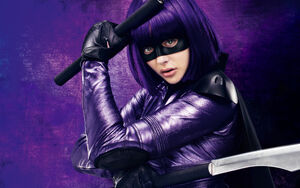 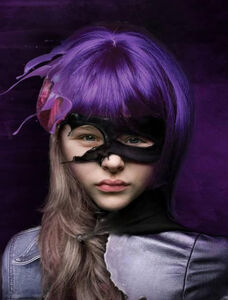 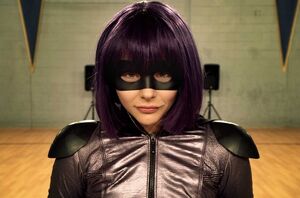 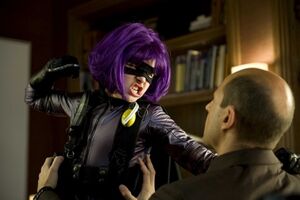 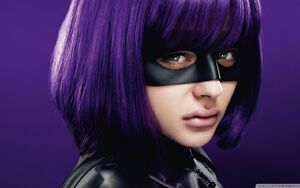 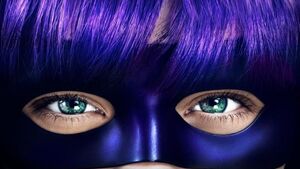 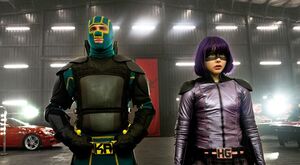 Retrieved from "https://hero.fandom.com/wiki/Hit-Girl_(Live-Action)?oldid=2273151"
Community content is available under CC-BY-SA unless otherwise noted.