Heroes Wiki
Register
Don't have an account?
Sign In
Advertisement
in: Mature, Female, Dead Or Alive Heroes,
and 27 more

The Fist of Innocence

Win the Dead Or Alive tournament

Honorable Martial Artist
Hitomi is a character from the Dead or Alive series, who debuted in Dead or Alive 3, replacing Ein as the regular karate martial artist in the character roster.

Hitomi has been practicing the art of karate under her father's tutelage since she was a child, and enters the Dead or Alive Tournaments either to prove her skills or to see Hayate. Either reason, she is determined to win the tournament.

Hitomi was born to a German father and a Japanese mother, and lived with them in southwest Germany where her father ran his own karate dojo. From a young age, Hitomi trained in the art of karate under her father's guidance. By the age of eighteen, she had earned a black belt.

After the events of Dead or Alive, Hitomi found ‘Ein’ unconscious in the Black Forest, after he had been abandoned by the Dead or Alive Tournament Executive Committee, following their failed Project Epsilon. Hitomi took him home, where she and Ein studied karate together until Ein left to enter the second Dead or Alive Tournament to find out about his past, which he had forgotten due to amnesia. During this tournament, Ein regained his memories, remembering that he was really Hayate, a shinobi leader, and returned home to the Mugen Tenshin Village.

Hitomi enters the third tournament in order to test her skills against other martial artists and to prove to her father that she was now a capable fighter, and an independent woman. While working on the Freedom Survivor as a waitress, she reunites with Ein and meets Ayane. When Hitomi asks her if she's Kasumi, the ninja is angered and fights Hitomi. After the fight, Ayane is surprised to find that Hitomi's karate is equal to her ninjutsu. Ein then finally tells Hitomi that his real name is Hayate, and that he and Ayane are ninjas, much to Hitomi's surprise. While on the ship with Ein she meets Jann Lee, who also shares a keen passion for martial arts, and the two share some philosophies about the way of martial arts. However Hitomi gets mad at him for being too hard on opponents after he brutally defeats Leifang.

With Hitomi ranking third place in the tournament, her father lets her leave the dojo, and she moves on with her new life as an independent adult.

When a sudden illness befalls upon her father, the family's dojo goes into despair and becomes afflicted with financial trouble. To help her father, Hitomi enters the fourth Dead or Alive Tournament in an attempt to win the cash prize. During the tournament, she faces and beats Leifang after a dispute over a cabbage, but the two of them form a friendship afterwards. Hitomi then faces Jann Lee again, after he rescues her from a T-Rex.

In the DOATEC Tritower, Hitomi eventually encounters Hayate again, and she pleads for him to come back with her to the dojo, admitting that she does not know what to do without him. Hayate tells her that he can't because he is no longer Ein, and the fourth tournament is no tournament at all, but a war. He then asks her to spar for old time's sake to which she happily accepts. After the fight, they tell each other to take care, and Hitomi runs down the stairs and passes Ayane with tears in her eyes.

After the tournament, Hitomi returns home, continuing to live her independent life.

Upon hearing about the fifth Dead or Alive Tournament, Hitomi reunites with Leifang and the two of them set off on a journey to train together. While training at a circus that's still under construction, the pair does a friendly sparring match against Brad Wong and Eliot. They are then invited to the tournament by Zack.

Later, Hitomi and Leifang travel to South America to continue their training. There, they spot Jann Lee being recruited by Zack into joining the tournament. Knowing that they need to do their own training, they spar against each other to improve their skills. After the fight, the two of them go separate ways, promising each other to meet again at the tournament. While on her own, Hitomi runs into Ayane, who is trying to find Kasumi's clone. Hitomi asks if she is entering the fifth tournament, to which Ayane says she is not, while chastising her choice of clothing for training. The two have a sparring match, and Ayane leaves to continue her search.

At the tournament, Hitomi beats Mila in the quarterfinals and Eliot in the semifinals. Before the finals, Hitomi reunites with Hayate, proudly telling him that she needs to win one more fight and she'll be champion. She then asks him if he could spar with her, telling him that her muscles are a bit tight. Hayate accepts and they spar together. After the fight they wish each other good luck, and then Hayate departs with Ayane.

Hitomi is defeated by Jann Lee in the finals, making her the runner-up of the tournament. 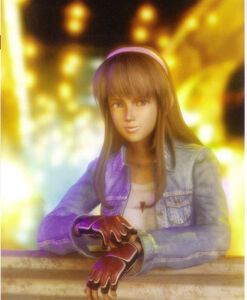 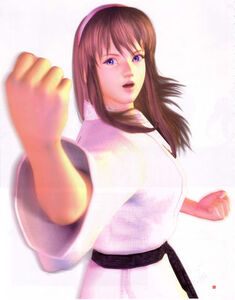 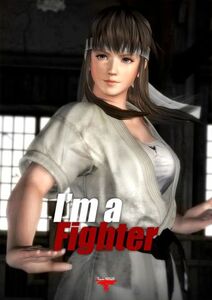 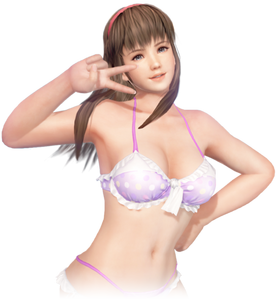 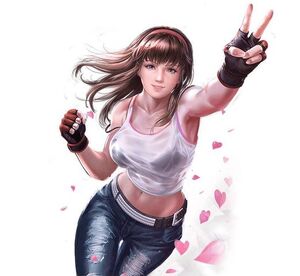