Guardian of the skies

???
Ho-Oh is a dual-type Fire/Flying Legendary Pokémon. It is often considered to be closely related to Lugia as a duo, even sometimes as its polar opposite.

Ho-Oh is a rainbow-colored avian Pokémon resembling a phoenix and a peacock. It's feathers are gold and red.

Ho-Oh has the ability to resurrect the dead (an example being Entei, Raikou, and Suicune). It is also known for its former signature move (Sacred Fire).

Ho-Oh appears in Super Smash Bros. Melee as a Poké Ball summon and a trophy.

Ho-Oh in Super Smash Bros. Brawl once again is a Poké Ball summon and a trophy, he also appears as a sticker that give a boost on flame attacks to any fighter by 12

Ho-Oh doesn't appears as a Poké Ball summon in Super Smash Bros. for Wii U but a stage hazard on Kalos Pokémon League.

Not only Ho-Oh reprise his role as a hazard on the Kalos Pokémon League stage in Super Smash Bros. Ultimate, but also appears as a legendary-ranked support spirit that gives the user an additional midair jump. The spirit can be summoned using cores of Raikou, Entei & Suicune, any grab core, any neutral core, and any two support core, or beating him in a spirit battle against a curry Charizard on the Blazing Chamber portion on Kalos Pokémon League where the fire and explosion attacks aren't effective against the said Charizard.

Ho-oh was first seen in the first episode, Pokémon - I Choose You!. It was one of the first Pokémon Ash Ketchum has ever seen, but he doesn't know what it was until further on. When he announced to Professor Oak that he saw something, he pointed at Articuno; it was a thoughtless mistake. Ho-oh was mentioned many times in For Ho-Oh The Bells Toll!, though the only legendary Pokémon seen was Suicune. Ho-Oh was last seen in Gotta Catch Ya Later!. 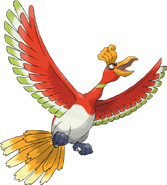 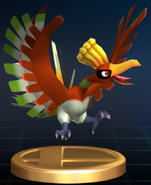